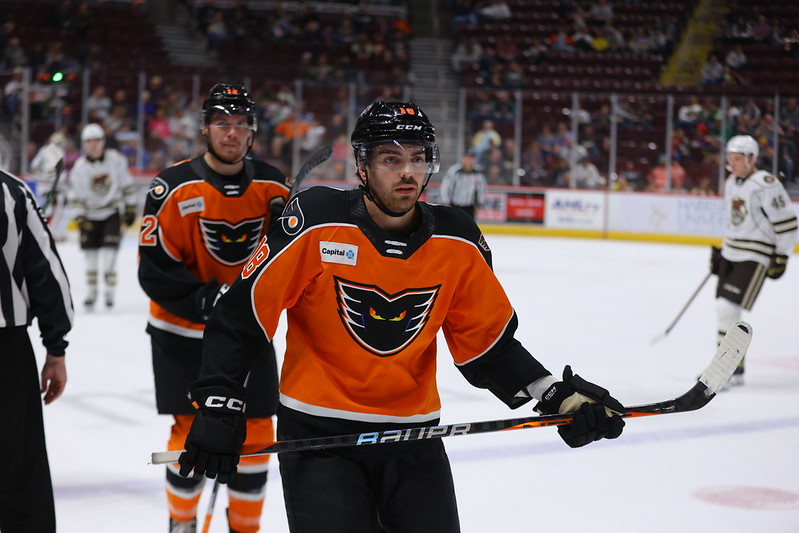 Hershey, PA – Jackson Cates scored a power-play goal for the Lehigh Valley Phantoms (2-4-1) in the first period, but ultimately the opposing Hershey Bears (3-2-2) notched a 4-1 victory on Sunday evening at GIANT Center. Cates’ tally was his first goal of the 2022-23 regular season after recording 10 points (2g, 8a) in 37 games with the Phantoms last season.

Mike Vecchione victimized his former team with a three-point performance including one goal and two assists. A handful of scraps and skirmishes in the game’s final period were unsurprising considering the ferocity of the Keystone rivalry.

Hershey’s Mike Sgarbossa soured the Phantoms with his first two goals of the season in the opening frame. Sgarbossa tallied only 43 seconds into the contest, followed by a power-play marker at 12:01. Both Sgarbossa tallies were assisted by former Phantoms forward Mike Vecchione and Sam Anas.

Lehigh Valley responded to cut their deficit in half on Cates’ first goal of the season. Also on the power play, Cates buried a lively rebound in the slot after an initial shot from Olle Lycksell was denied by Bears netminder Zach Fucale with a right pad save. For Cates, the tally was his first with the Phantoms since November 10, 2022 at Hershey. Both of Cates’ goals last season were shorthanded. This is his first non-shorthanded goal with Lehigh Valley.

Lycksell and Louie Belpedio recorded the assists at the period’s 15:30 mark.

Samuel Ersson made 10 strong stops for Lehigh Valley in a scoreless second period, and none bigger and better than a breakaway save against Bears forward Hendrix Lapierre midway through regulation. Ersson finished the night with 30 saves, including a multitude from point-blank range. Lehigh Valley and Hershey combined for a season-high 76 penalty minutes in a spirited, rivalry tilt. 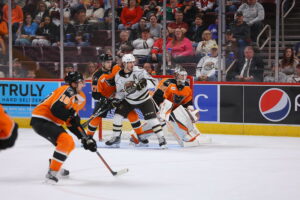 Hershey scored twice more in the third period to complete the 4-1 count. Bobby Nardella hit twine from the center point at 2:26, followed by a Vecchione power-play goal on the breakaway that he snapped to the high-glove corner past Ersson at 7:24.

Jordy Bellerive was challenged by Hershey captain Dylan McIlrath, who took an instigation penalty, in the game’s closing seconds. The smaller Bellerive held in there against the larger McIlrath who was upset at a hit that Bellerive had delivered on him moments earlier.

The Phantoms will rematch the Hershey Bears on Wednesday, November 30 at PPL Center on Military Appreciation Night. Lehigh Valley went 1-for-3 on the power play while the Bears were 2-for-5. Final shots on goal totaled 34-23 in favor of Hershey.