Lehigh Valley, PA – A founding partner of both PPL Center and the Lehigh Valley Phantoms, Capital BlueCross has been named the title sponsor of the 2017 AHL All-Star Classic. 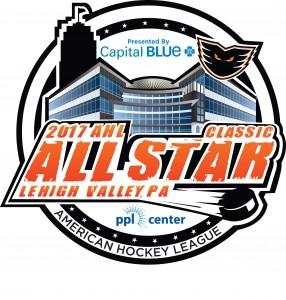 The Capital BlueCross AHL All-Star Classic weekend consists of four events, each taking place at PPL Center. The event includes a Phan Fest during the day on Saturday, January 28 and a Tailgate Party that evening, followed by the AHL All-Star Skills Competition on Sunday, January 29, and the 2017 AHL All-Star Game on Monday, January 30. The AHL will also host its annual Hall of Fame Induction and Awards Ceremony Monday afternoon.

“Being chosen to host this internationally viewed event is such a big win for the Lehigh Valley,” said Phantoms co-owner/governor Rob Brooks. “And having great supporters such as Capital BlueCross provides us with the courage and confidence to place bids on such events.”

“Capital BlueCross is proud to be a part of this high-profile event in the Lehigh Valley,” said Anne Baum, Vice President Lehigh Valley, Capital BlueCross. “We see ourselves as more than an insurance company and supporting events such as the AHL All-Star Classic weekend at PPL Center is one example of our commitment to the community. The AHL All-Star Classic is an exciting opportunity for Lehigh Valley sports fans to watch top hockey talent from throughout North America – PLAY FEARLESS!”

In operation since 1936, the AHL continues to serve as the top development league for all 30 National Hockey League teams. More than 88 percent of today’s NHL players are American Hockey League graduates, and an all-time record 7.1 million fans attended AHL games across North American in 2015-16.

Capital BlueCross, headquartered in Harrisburg, Pa., is the leading health solutions and insurance company in central Pennsylvania and the Lehigh Valley. A partner in the community’s health for nearly 80 years, Capital BlueCross offers health insurance products, services and technology solutions that provide peace of mind to consumers and promote health and wellness for our customers.

More than a health insurer, the company delivers innovative solutions through a family of diversified businesses that is creating a healthier future and lowering health care costs. Among these solutions are patient-focused care models, leading-edge data analytics, and digital health technologies. Additionally, Capital BlueCross is growing a network of Capital Blue stores that provide in-person service and inspiration to help people reach their health goals. Capital BlueCross is an independent licensee of the BlueCross BlueShield Association. For more information, visit www.capbluecross.com.