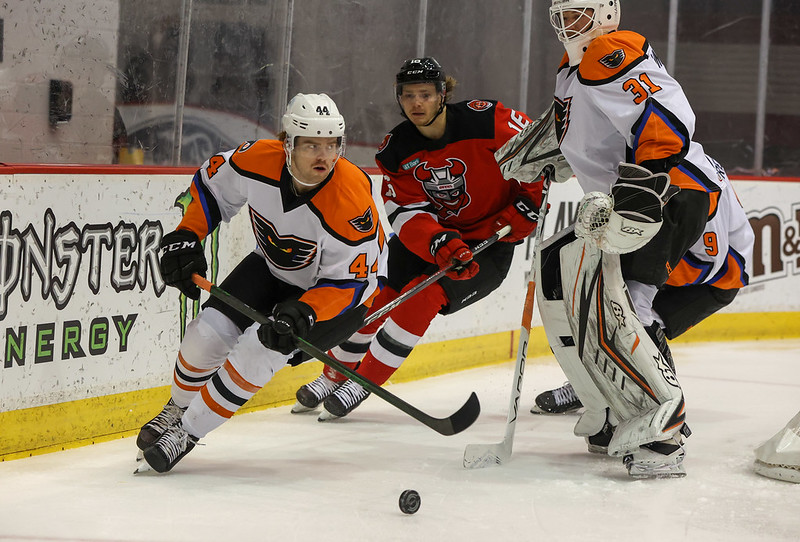 Forward Jackson Cates and defensemen Nick Seeler and Cam York have been loaned by the Flyers to the Lehigh Valley Phantoms. And forward Garrett Wilson has been assigned to the Phantoms.

Additionally, the Phantoms have assigned forward Charlie Gerard to their ECHL affiliate, the Reading Royals.

Cates, 24, is entering his first full professional season after joining the Phantoms late last year following the conclusion of his collegiate campaign with Minnesota-Duluth. The undrafted free agent signee of Stillwater, Minnesota scored 11-16-27 in 28 games for the Bulldogs last season and also played in four games with the Philadelphia Flyers. Jackson Cates is the older rother of Noah Cates who was a round 5 selection of the Flyers in 2017 and is entering his senior season at Minn-Duluth.

Seeler, 28, is a 6’2″ defenseman from Eden Prairie, Minnesota who has played in 105 NHL games primarily with the Minnesota Wild. The University of Nebraska-Omaha product did not play last year.

Wilson, 30, is a 6’3″ left wing from Barrie, Ontario who is entering his second season with the Phantoms. He played in 27 games with Lehigh Valley last year registering one goal with eight assists. Wilson has played in 84 career NHL games with Pittsburgh and Florida and has also played in 440 career AHL games scoring 95-119-214 playing for San Antonio, Portland, Wilkes-Barre/Scranton and Toronto. Wilson served as an alternate captain on the Phantoms last season.

York, 20, enters his first full professional season after turning pro at the end of last year. The Flyers’ first-rounder (#14 overall) in the 2019 NHL Entry Draft was Big 10 Defenseman of the Year when he scored 4-16-20 in 24 games at Michigan. He also captained the USA World Juniors team to a Gold Medal victory over Canada last January. York played in eight games with the Phantoms last season scoring 2-3-5 while also making his NHL debut in a three-game stretch with the Flyers.