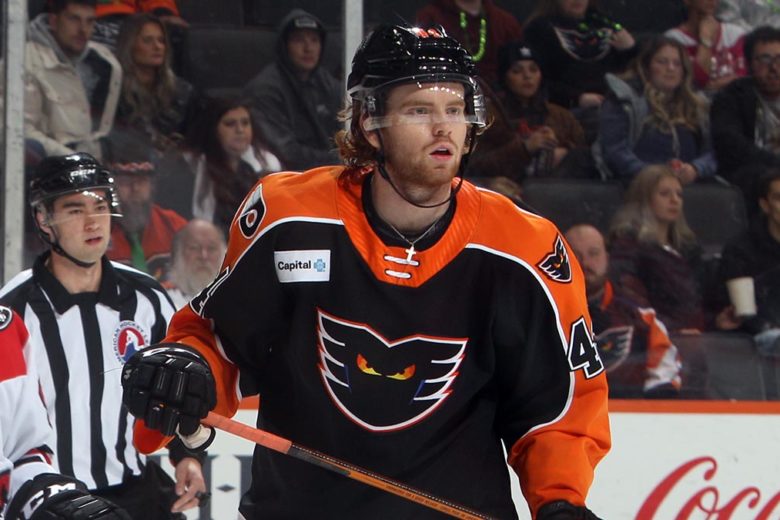 When Cam York was assigned to the Lehigh Valley Phantoms on Wednesday, some were taken by surprise. But in doing so, he now has something in common with a distinguished list of Flyers players – Bill Barber and Claude Giroux for starters, along with current Flyers Scott Laughton and Travis Sanheim.

All four of those players were also first-round draft picks and, at some point, were in the same situation York is in now – after an initial showing at the NHL level, they were assigned to the American Hockey League to develop their game. Barber, of course, went on to be a Hall-of-Fame player and was second in Flyers history in scoring until Giroux passed him last year. So they turned out all right. There have been others – it happened to both R.J. Umberger and Brayden Schenn; Schenn and Sean Couturier both got AHL time during the 2012 lockout. On the goaltending side, Ron Hextall, Pelle Lindbergh and Brian Boucher all did it. Laughton and Sanheim have too, and they both believe York will be right behind them as someone who will return to Philadelphia with renewed momentum. 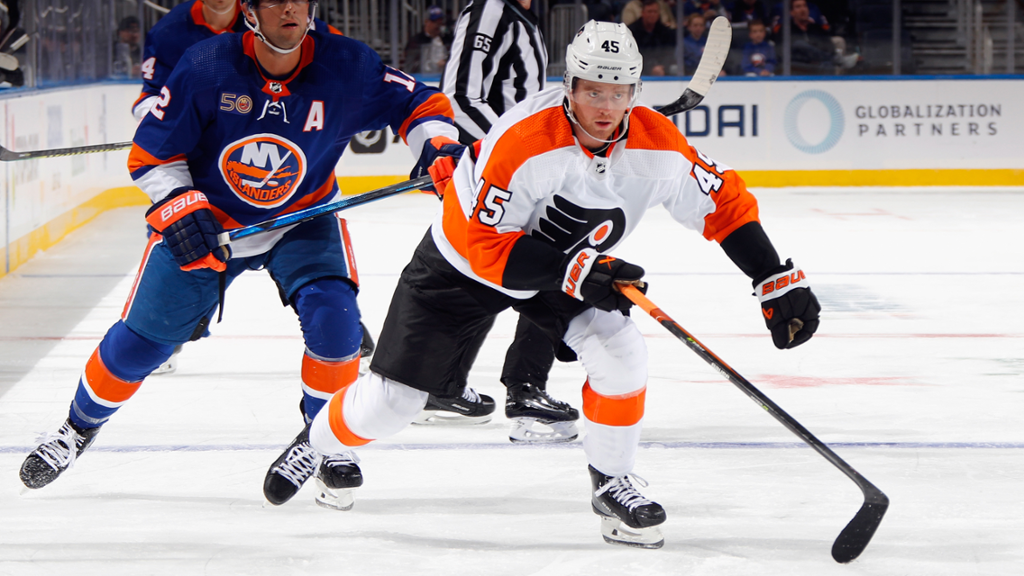 The notion of being “sent down” to the Phantoms is somewhat of a misnomer. Yes, it’s considered “minor league hockey” in the colloquial sense, but the American Hockey League is widely regarded as the second-best professional league in the world. The level of play in the league is excellent. Its long, storied history of developing players for the National Hockey League is too extensive to get into here, but even those who play their entire careers in the AHL do so while also representing their countries in international play and making other notable marks in the hockey world. It is a perfect place for a young NHL prospect to develop his game.

That doesn’t mean it doesn’t initially sting when it happens. After all, any player’s goal is to play in the NHL. It’s the top of the heap, both competitively and financially. A player’s entire life is devoted to getting there. And once you have, or you think you’re about to, it can be tough to take a step backward – even if it’s the best way for you to get back to the NHL for good.

“When you first get sent down, it’s very hard I think mentally more than physically,” Laughton said.

That was Laughton’s experience in 2016 when, after sticking with the Flyers the entire year in the 2015-16 season, things got a little bumpy. He suffered a preseason knee injury at the 2016 training camp and after he recovered in November, he ended up spending the entire 2016-17 season with the Phantoms.

“That first week is a little bit of a transition period,” he said. “The biggest thing for me was really focusing on the Phantoms and not worrying about being called up or anything like that. You go in and you focus on that team and going about your business that way, and I think you’ll be way more successful. You’re not too worried about what’s going to happen next. So I think that’s a huge key.” 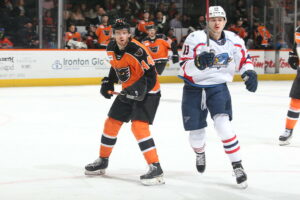 Sanheim’s situation was perhaps more similar to York’s than Laughton’s in that it was on-ice performance, rather than an injury, that resulted in his AHL stay – and it happened in mid-season, which can sometimes be more difficult to handle. Sanheim played a full AHL season in 2016-17 and made the Flyers out of training camp at the start of the 2017-18 season. But his play fell off around the turn of the calendar year and after being scratched nine times in a 10-game stretch, he was sent to Lehigh Valley to revitalize his game.

“I was up here, wasn’t playing the way that I needed to and my confidence wasn’t there,” Sanheim said. “Going [to the Phantoms] allowed me to play against men and yet be a top guy and contribute in all facets of the game, whether it’s penalty kill or power play, and play big minutes. That’s where you learn the most. You’ve got to play against men and get that confidence.”

50 years ago, Barber’s first Flyers training camp ended with a trip to the Richmond Robins for most of October 1972 before he came back to Philadelphia. More recently, Giroux came to Flyers training camp in 2008 as a highly-touted prospect following a 106-point season with Gatineau in the QMJHL. But his camp was less than impressive, and he started the season with the Phantoms at the other end of the hallway at the Flyers Training Center.

The move no doubt sparked the then-19-year-old forward – he cooked the AHL competition for 17 goals and 16 assists in the first 31 games of the season, including eight goals and eight assists for 16 points in his last 10 games before Christmas. He was at or near the league lead in scoring when he was summoned to travel with the Flyers on their post-Christmas road trip, and aside from two more technicality games with the Phantoms later that season, he was in the NHL for good.

The season in Allentown had a similar effect on Laughton.

“Confidence is a huge thing in this game,” Laughton said. “Especially for me just playing lower minutes in the NHL and not really having a role in special teams and really trying to find my way, going back down and playing meaningful minutes and having a real good team and going to the playoffs really helped my game.”

The interesting thing about York’s situation is it comes with an eye on making sure he reaches his maximum potential as a player. During this camp, York performed at least near the level he played at last season when he came up in January and stayed pretty much the rest of the year. But the Flyers’ front office, and John Tortorella in particular, sees a player that can go beyond that – one who can become a defenseman that dominates a game, dictates its pace and can change the trajectory of what happens in it every time he steps on the ice.

“I want him to take control of games,” Tortorella said Wednesday after the move. “I think he has the ability to make more of a difference. I want him to attack the game – and attacking the game isn’t banging for him. It’s using his legs to get us out of the end zone. I think with some of his ability, he could (lead) a breakout for us. Just get the puck and go.”

It’s fair to say that’s a role the Flyers have been trying to fill on a permanent basis since Chris Pronger skated off the ice in Winnipeg 11 years ago next month, no longer able to cope with the aftereffects of an inadvertent stick to the eye three weeks earlier that turned out to be career-ending. Matt Niskanen filled it well for about five months plus a playoff run in 2019-20. Other than that, the organization’s attempts have been thwarted by everything from matched offer sheets to blood clots, from knee injuries to a pandemic, and finally to one of the most unusual injuries many people in the game have ever seen.

The next attempt, it appears, may be to make it homegrown. It’s as good a plan as any. And Sanheim has no doubt that York can use this time to get there.

“After I [went to the Phantoms], the next time I came up here you could see a world of difference in my play and my confidence and being able to think that I belonged,” Sanheim said. “I’m sure it’s going to be the same with him. He’s going to go down, going to work hard and I’m sure he’s going to be right back up here.”