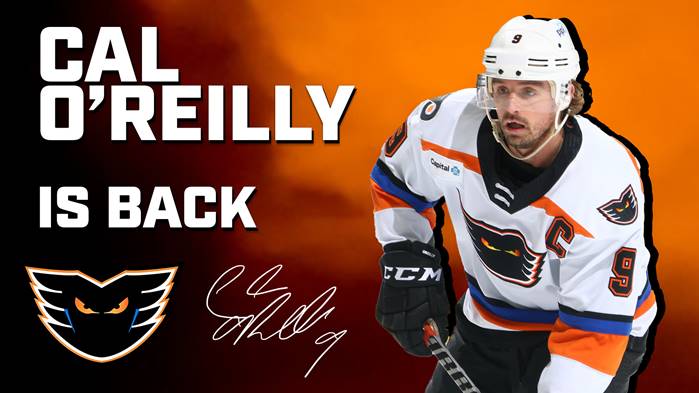 Captain Cal is Back for a Fourth Season

Lehigh Valley, PA – The Lehigh Valley Phantoms have announced that center Cal O’Reilly has been re-signed to an AHL contract for the 2022-23 season. The team’s captain is returning for a fourth season with the Phantoms as he enters his 16th year in pro hockey.

O’Reilly, 35, is one of the great players in AHL history and has been an invaluable team leader since his arrival to Lehigh Valley. His career total of 535 assists places him 8th all-time in the American Hockey League and he is 27th in career points with 686 which also makes him the league’s active scoring leader. With the Phantoms, O’Reilly has played in 159 career games over the previous three seasons scoring 31 goals while recording 74 assists for 105 points for the Orange and Black.

He also seems to be getting better with age. O’Reilly set a personal best with 21 goals in the 2021-22 season to lead the Phantoms. His 53 points was also tops on the team and marked the seventh time in his career that he has eclipsed the 50-point mark.

Normally known for his passing and playmaking, O’Reilly’s enhanced focus on shooting the puck himself resulted in some surprising production in which he broke the 20-goal mark for the first time in his career. His previous personal best had been 15 years earlier when he scored 18 goals with the Milwaukee Admirals as a 20-year-old rookie in the 2006-07 season. 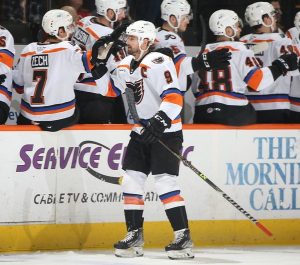 O’Reilly achieved yet another impressive milestone in his legendary career when he played in his 1,000th career professional game on March 25, 2022 at the Laval Rocket. He was honored in a ceremony at PPL Center during the team’s next home game receiving a plaque to commemorate the achievement while also enjoying video messages from his brother, Ryan O’Reilly of the St. Louis Blues, and childhood heroes Wayne Gretzky and Mike Modano.

A player doesn’t make it to 1,000 games and a 16th pro season without loving what he does. O’Reilly’s dedication and passion for the game are well known and he’s excited to come back to the Phantoms.

“It’s great. Both me and my wife (Terra) are thrilled to be coming back to Allentown again,” O’Reilly said from his home north of Toronto. “I still love it. I haven’t lost that love and drive for the game. Until I lose that or I just can’t play anymore, you know what, I’ll keep going as long as I can. My body is holding up well. And I still feel like I’m a real good player out there and can contribute to our team. When that’s the way I feel and still loving it then I’m going to keep going.”

The father of three was also recognized in 2021 when the American Hockey League named him the winner of the Fred T. Hunt Memorial Award as the AHL player who best exemplifies the qualities of sportsmanship, determination, and dedication to hockey. The award was voted on by his peers including AHL coaches, players, and media.

Head coach Ian Laperrière raved throughout the season about the importance and impact of his veteran leader.

“I can talk about him all day if you want me to,” Laperrière said ahead of O’Reilly’s 1,000th game. “As a first-year head coach, I’m privileged and I’m lucky to have a guy like him. How can you not cheer for a guy like that? He plays the right way. I can do so much as a head coach but we need guys like that to be an extension of our staff in the locker room and he’s been that since Day One.”

O’Reilly is a five-time AHL All-Star and has been a captain of four different teams. He is known throughout the AHL as a driven player who leads by example. Everywhere he goes, he earns the respect of the young prospects who are his teammates and they benefit from observing his professionalism.

“Cal’s work ethic is better than anyone I’ve seen come through this organization,” Phantoms forward Isaac Ratcliffe said. “He’s always one of the last guys off the ice in practice. He’s always one of the first guys here in the morning. And you always find him in the gym either stretching out or rolling out. I don’t know if it’s because he’s an old guy now! But his work ethic is really what’s gotten him here and through his career too.” 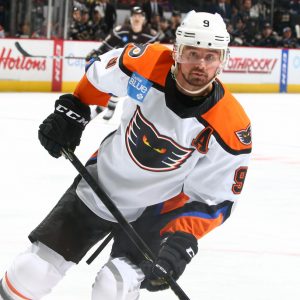 Along with his 826 career AHL games where he has scored 151 goals with 535 assists for 686 points, O’Reilly has also played in 145 NHL games through which he has notched 16 goals with 33 assists for 49 points. The Seaforth, Ontario native has played in the NHL with the Nashville Predators, Phoenix Coyotes, Pittsburgh Penguins, Buffalo Sabres and Minnesota Wild. His AHL career has seen stints with the Milwaukee Admirals, Portland Pirates, Wilkes-Barre/Scranton Penguins, Utica Comets, Rochester Americans, Toronto Marlies, Iowa Wild and Lehigh Valley Phantoms.

A 2005 draft choice by Nashville, O’Reilly has twice appeared in the Calder Cup Finals with Milwaukee in 2006 and Utica in 2015.

PPL Center is pleased to welcome the return of hockey season on Friday, September 16 and Saturday, September 17 featuring the Philadelphia Flyers and New York Rangers in a pair of compelling Rookie Games.