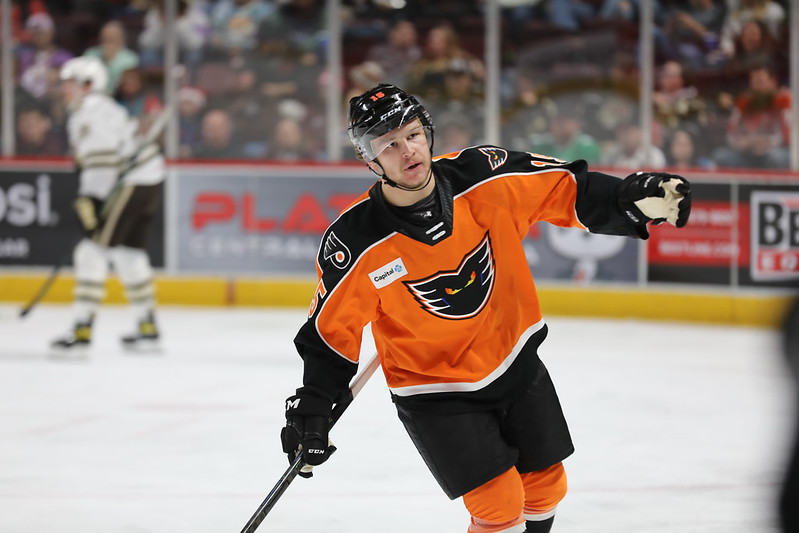 Hershey, PA – Jordy Bellerive (2nd, 3rd) scored a pair of goals for Lehigh Valley including a go-ahead marker midway through the third period but the Hershey Bears converted three consecutive goals in the closing minutes from Mike Sgarbossa, Connor McMichael and Mike Vecchione to rally from behind and escape with a 5-3 victory on Sunday evening at Giant Center.

The game also included several big checks and a couple scraps befitting the fierce rivalry. Adam Ginning had his first official pro fight in the first period and Hayden Hodgson laid out two of the biggest hits of the contest.

The Phantoms found their stride late in the first and continued momentum into the second period. Artem Anisimov (8th) deflected an Egor Zamula blast from the point for a 4-on-3 power-play goal to forge a 1-1 tie at 1:50 into the middle frame. The Phantoms have gone 13-for-31 on the power play in the last 10 games including 1-for-2 tonight. Lehigh Valley is converting at a 41.9% clip on the recent hot stretch. 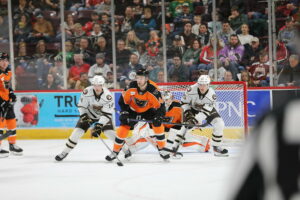 Bellerive picked off a cross-ice pass with a nifty deflection almost waist-high. The energetic addition to the Phantoms is accustomed to big games in Chocolatetown from his days with the Wilkes-Barre/Scranton Penguins over the past three seasons. He raced up ice to beat the Bears defenders to the puck and then scored on a blast five-hole for the team’s fourth shorthanded marker of the season.

But Hendrix Lapierre (8th)  answered just 33 seconds later with a power-play goal at the right of the cage on a setup by Henrik Borgstrom to even the count again at 2-2.

The Phantoms dominated play for the majority of the second period enjoying a 12-4 shots advantage in the frame even though Hershey benefitted from three power plays in the middle stanza.

Lehigh Valley appeared to be in especially good shape when Bellerive scored his second goal of teh game on a bank off a defender’s leg from behind the goal. He followed his own shot and quickly rotated to the other side to fake out goaltender Clay Stevenson. The carom just eluded the left skate of the netminder with 10:32 remaining in the third for a 3-2 lead. It was the second time this month that Bellerive has given the Phantoms the lead on a bank from beneath the goalline. His first goal of the season was a game-winner at Charlotte on December 2 when his shot off the leg of Alex Lyon with six minutes left pushed the Phantoms to victory.

But Hershey wasn’t finished and the Bears put together a furious rally to pull away. 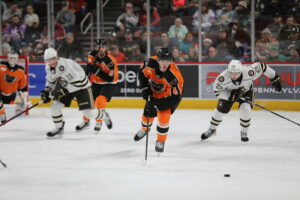 Mike Sgarbossa (10th) scored on a 2-on-1 rush with a shot from the right wing past the stick side of Sam Ersson for a 3-3 deadlock with just 6:01 to go. It was Sgarbossa’s fourth goal against the Phantoms this season. Just 30 seconds later in was Connor McMichael taking advantage of a steal in the neutral zone. His rifle on the rush from the high-slot went past the glove of Ersson to put the Bears ahead again at 4-3. Former Phantom Mike Vecchione scored his team-leading 11th goal of the season to conclude the scoring with 4:11 left on a rebound of a Sgarbossa shot that bounced his way in the slot off the trapper of Ersson.

Hershey racked up 16 shots in the final period for a 29-28 shots edge in the see-saw affair. The Bears were 1-for-5 on the power play and the Phantoms finished at 1-for-2.

Lehigh Valley and Hershey will rematch on Wednesday night, this time at PPL Center, in Round 5 of the rivalry series. 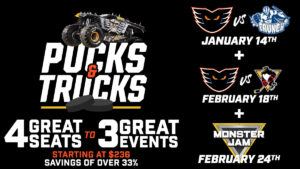