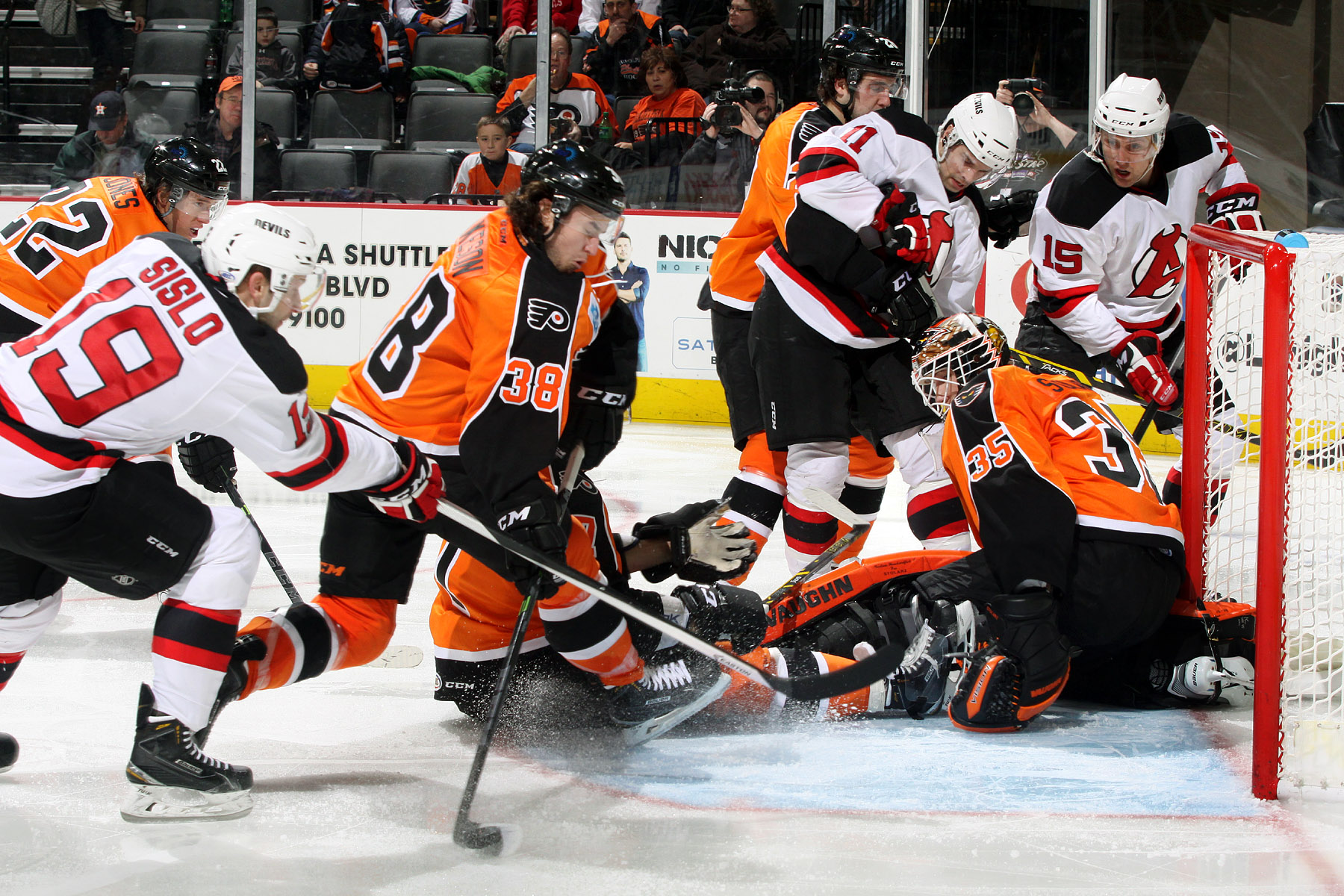 Lehigh Valley, PA – Nick Cousins and Andrew Gordon became the first two double-digit goal scorers this season for the Lehigh Valley Phantoms Friday evening as both snipers found the back of the net in a back-and-forth battle at PPL Center that saw the Albany Devils claim a 3-2 win in front of a standing room-only sellout crowd of 8,701 fans. The sellout was the third straight capacity crowd for the Phantoms who have now enjoyed eight sellouts overall this season.

Gordon, who now leads all Phantoms with 11 total goals this season, has produced goals in three straight outings while Cousins, who picked up his 10th conversion of the year Friday, moved into a tie with All-Star blueliner Brandon Manning for the team lead in overall scoring with 23 total points. Both Gordon and Cousins registered a goal and an assist Friday evening for their fifth and seventh multi-point games this season. 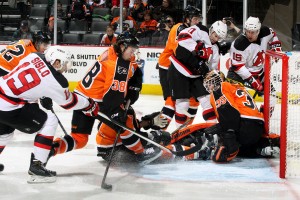 The rivalry showdown began with a blistering pace as the two sides kicked off the evening with nearly eight minutes (7:54) of seamless hockey following the game’s opening faceoff. Lehigh Valley’s trio of Blair Jones, Taylor Leier and Jason Akeson were buzzing early generating scoring opportunities in each of their first three shifts but neither side was able to find the back of the net in the opening period despite a combined 15 shots on goal. The Phantoms did a tremendous job of limiting Albany’s scoring opportunities in the first frame as the Devils were held to just five shots on goal in the opening period. Lehigh Valley’s Anthony Stolarz turned aside each of those five scoring bids while his Albany counterpart, Devils’ netminder Scott Clemmensen, registered 10 saves on 10 Phantoms shots on goal in the opening stanza.

The Devils generated some sustained pressure at the start of the second period but Stolarz remained razor sharp particularly against a point-blank opportunity by Albany’s Cam Janssen from the slot, which was promptly kicked out by the right pad of the 6’6″, 220-pound goaltender. The Phantoms answered the Devils’ pressure with some of their own and netted the game’s first marker just under six and a half minutes into the middle frame when Cousins unleashed a rocket of a slap shot from the left wing that sizzled into the back of the Albany cage. Gordon and Oliver Lauridsen assisted on Cousins’ 10th conversion of the season. The goal marked the 19th time in 36 games this season that the Phantoms have grabbed the game’s opening goal. Lehigh Valley is now 11-5-2-1 when scoring first this year. 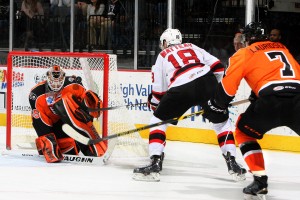 Albany found a way to level the contest just over five minutes into the third period when Stefan Matteau lifted a bouncing puck to the front of the Phantoms net that was eventually swatted in by Rod Pelley. Dan Kelly earned the secondary assist on Pelley’s fourth tally of the year which evened the game at a goal apiece exactly 5:05 into the final frame.

The Devils then claimed their first lead of the night a little over five minutes later when, while on the power play, Reece Scarlett sent a stretch through the neutral zone that sprung Paul Thompson on a breakaway resulting in his league-leading 19th goal of the season. Clemmensen grabbed the secondary assist on the man-advantage marker, which snapped a string of 18 consecutive successful penalty kills by the Phantoms.

Lehigh Valley quickly regrouped though and evened the game once again just over a minute later when Gordon launched a slapper from the left wing half boards that eluded Clemmensen thanks in large part to a towering net-front screen provided by 6’4″, 232-pound Zack Stortini. Adam Comrie and Cousins assisted on the even strength strike netted 11:30 into the final period of regulation.

The Devils would have the final say though as Matteau connected on his third marker of the season 13:17 into the third period. David Wohlberg and Seth Helgeson assisted on the man-advantage marker, which capped a 2-for-10 performance on the power play for Albany. Meanwhile, the Phantoms went 0-for-7 with the man-advantage.

Clemmensen earned the victory in goal for Albany thanks to 32 saves on 34 shots. Meanwhile, Stolarz suffered the setback despite an impressive 33 saves on 36 Devils shots.

The Phantoms return to action on Saturday, January 17 when Lehigh Valley welcomes the Binghamton Senators to PPL Center for a 7:05 PM showdown. It’s another Legends Night as Bob Clarke, one of hockey’s greatest legends and the architect of the Phantoms’ 1998 and 2005 Calder Cup championship teams, will be at the game. All fans in attendance will receive a FREE Collector’s Edition Poster spotlighting Clarke and the hockey legend will be signing autographs from 6:00 to 6:45 PM in advance of tomorrow’s game.