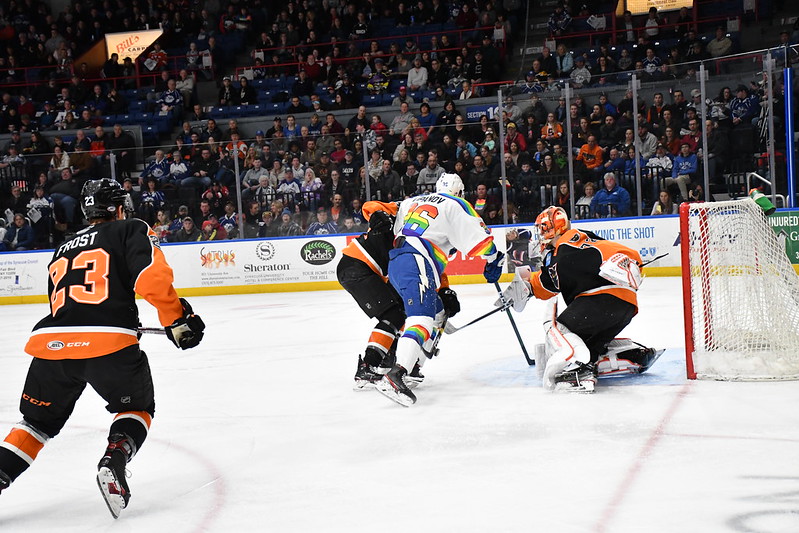 Syracuse, N.Y. – Rookie goalie Kirill Ustimenko turned in a magnificent 36-save performance in his return to the Lehigh Valley Phantoms but ultimately the host Syracuse Crunch held on for a 2-1 victory on Saturday night.
Carsen Twarynski (5th) broke Spencer Martin’s shutout bit with just 58 seconds remaining but the Phantoms could not find the equalizer in the intense finish. 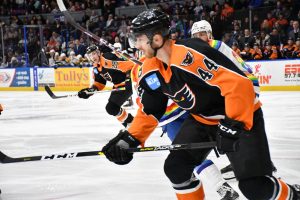 Ustimenko faced a barrage of point-blank Syracuse scoring chances in the first period making 19 saves on 20 shots while athletically moving to get a piece of almost everything the Crunch shooters threw his way. Alex Barre-Boulet (23rd) scored from the right of the cage on a nifty reverse from behind the goal by Matthieu Joseph setting him up but otherwise “Usti” was perfect. The 21-year-old goalie from Belarus had just been brought back up from Reading on Thursday and was playing his second career game in the AHL and his first since his winning debut at Wilkes-Barre two weeks earlier.

Lehigh Valley (23-25-8) was behind the eight-ball for much of the second period in a game in which the team successfully killed seven Syracuse power plays. The Crunch had two full minutes of 5-on-3 in the middle frame but the Phantoms hung on to stay within one. Mark Friedman, returned to the Phantoms from Philadelphia earlier in the day, came up with a big shot block in the key sequence.

Shayne Gostisbehere unloaded a big shot from the left circle in the opening minute of the third period in an attempt to equalize but Martin had pivoted over to his right and then reached way across with the glove to make perhaps the best save of the evening in the splendid goaltenders’ duel.

Syracuse (26-22-8) finally pushed their lead to 2-0 when one player drove to the net from the right corner and Ustimenko was flipped with the contact. Dominik Masin (2nd) ripped a big slapper from the high slot for the team’s second goal as the Phantoms goalie was still recovering and gaining his orientation. 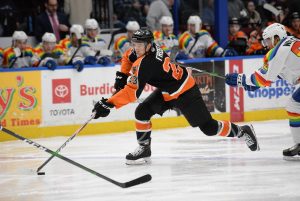 Lehigh Valley scored a 6-on-5 goal for the second game in a row with Gostisbehere pushing the puck down low for Chris Bigras who drove to the net eventually setting up Carsen Twarynski to poke home a backhander in a mad scramble. The Phantoms efforts for another late, dramatic tie were erased by the Crunch who clinhced the intense contest.

The Crunch out shot Lehigh Valley 38-24. Syracuse was held to 0-for-7 on the power play while the Phantoms were 0-for-2.

The Phantoms return to PPL Center next Friday and Saturday for consecutive home games against the Charlotte Checkers on the team’s “Miracle on Ice” Weekend featuring tickets available for just $19.80.