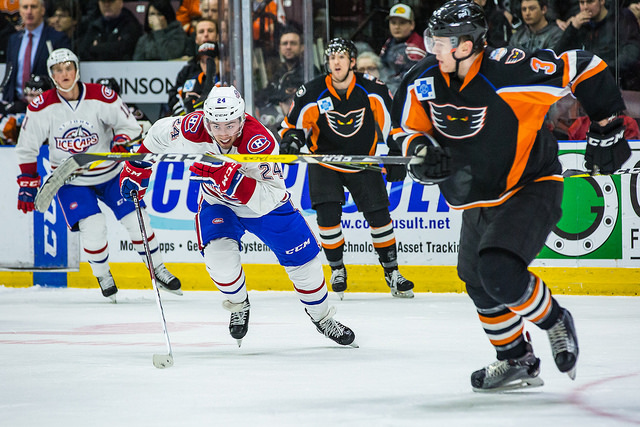 St. John’s, NL – The Phantoms staged yet another dramatic come-from-behind finish at the St. John’s IceCaps to secure an exciting third straight win. Taylor Leier (10th) tied the score with just 1:16 remaining in regulation eventually leading to Corban Knight’s shootout winner in the fourth round in a 3-2 final. Anthony Stolarz in his third consecutive start won again with a magnificent 42-save performance that almost certainly rates as one of his best of the season while Scott Laughton (16th) also scored for the Phantoms on a shorthanded breakaway. 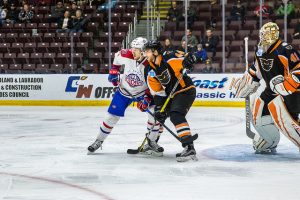 One night earlier also at St. John’s, T.J. Brennan tied the score with 1:44 remaining before Brennan would score again in overtime to cap an incredible rally after previously trailing 4-0. It was the first time this season for the Phantoms to play overtime contests in back-to-back games. The Phantoms improved to 2-0 in shootouts this season with their only other win coming on December 16 against Hershey. The Phantoms are a combined 5-4 in games decided after regulation (3-4 in overtime and 2-0 in shootouts).

The Phantoms improved their overall record to 42-19-4 with just 11 games remaining on the regular season and closed the deficit on the first-place Wilkes-Barre/Scranton Penguins to just one point heading into this Saturday’s big head-to-head PPL Center showdown of the top two teams in the conference. If Lehigh Valley wins eight of their next 11 games it will mark the first time in Phantoms franchise history for the club to reach the 50-win mark. The Philadelphia Phantoms won 49 games in the inaugural 1996-97 of the team which remains the most ever in the 21 seasons of the club’s existence.

St. John’s carried the play for the first period offering a 21-shot barrage at Stolarz who somehow stopped everything thrown his way in perhaps his best single period performance of the season. “Stolie the Goalie” made five or six dazzlers among all of the stops against a St. John’s team benefiting from an abundance of power-play time. 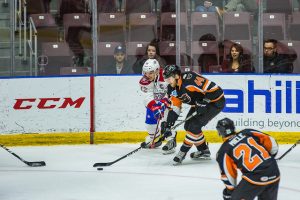 Cole Bardreau was assessed a five-minute boarding penalty with just over 5:00 remaining in the first period and the IceCaps went to work on their lengthy power-play chance. But early on their attack the quick anticipation of Russian rookie Radel Fazleev would pay off. His nifty intercept and chip forward sent Scott Laughton speeding out on a shorthanded breakaway which he successfully buried to the blocker-side of former veteran Adirondack Phantom netminder Yann Danis. Laughton’s third shortie of the year was also good for his 16th goal overall. Laughton moves into a tie for third in the AHL in total shorthanded strikes.

A couple minutes after the goal, Laughton was assessed with a penalty thus affording the hosts with two full minutes of 5-on-3 time with Bardreau still serving his boarding major. But the scrappy Phantoms penalty killers came through with one scrambling block after another along with a couple of key interceptions. All the while, Stolarz was wowing the opposition crowd with some of his best dazzlers of the evening including a right-handed swat of a mid-air rebound capping a rapid-fire fullry that he somehow punched away for his 21st stop.

The resilient Phantoms worked their way through the adversity and held a 1-0 lead after 20 minutes despite a shots disadvantage of 21-6 even though the IceCaps benefited from seven full minutes of power-play time including the 120 seconds they held on the two-man. 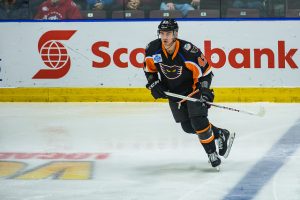 The Phantoms clamped down on the St. John’s attack in the second period limiting the IceCaps to just six shots through the first 19 minutes of the middle frame. But another power-play opportunity for the IceCaps would payoff with an equalizing goal for a diving Daniel Carr (6th) who got his stick on a bouncer into the slot immediately after a faceoff win for Daniel Audette at 13:09 into the second.

St. John’s would take the lead about seven minutes into the third on another power-play opportunity. This time Daniel Audette (9th) would deflect home a feed from the right boards by Chris Terry and it was time for the comeback Phantoms to do their thing yet again.

Both teams took penalties in the last couple minutes of regulation leading to some 4-on-4 when the Phantoms pulled goalie Anthony Stolarz for the extra attacker. Greg Carey behind the net received a feed from Andy Miele and quickly swung puck back across the grain to an awaiting Taylor Leier on a sharp-angle at the bottom of the right ring. Leier found enough daylight to put home his 10th of the season just through the glove of Danis for the equalizing goal with just 1:16 remaining.

Leier’s goal was his first since January 25 shortly before the hard-working third-year winger would miss six weeks with an injury. Wednesday was the third game back in the lineup and the Phantoms are 3-0 since his return.

The Phantoms almost won the game in the closing milliseconds of regulation when Coin McDonald gained the line into the St. John’s zone and connected with an open Corban Knight on the left-wing whose shot from the point was loose in the crease after an initial pad save from Danis. Cole Bardreau came charging in with just one second left but Danis was somehow able to stuff that close-range attempt to push the game to overtime. 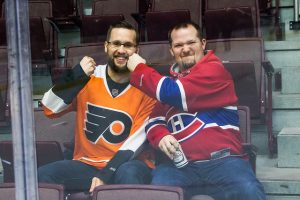 Lehigh Valley began the extra period with an abbreviated power play that eventually led to some 4-on-4 that would last for awhile before the first whistle would offer a change to normal 3-on-3.

Daniel Carr sped up the right wing almost on a breakaway but instead opted to go in wide behind the goal for a wrap-around to the other side which was barely stuffed off the right leg of Stolarz to prevent the winner. St. John’s out shot the Phantoms in the overtime 5-1 but Stolarz was the difference-maker yet again.

Andy Miele almost repeated his elevated, top-shelf backhander that won a shootout game for the Phantoms on December 16 against Hershey but trying the same move in the first round this time from a slightly sharper angle hit off the top of the post and bounced away.

Stolarz came up with a big poke-check save against veteran Chris Terry in the third round and then anticipated nicely for an impressive glove-denial on Daniel Carr in the fourth round.

Then it was Corban Knight’s turn in the fourth round who converted past the glove of Danis for the game-winner and the only goal for either side in the shootout phase.

Lehigh Valley finished 3-1 against the St. John’s IceCaps this season. St. John’s out shot the Phantoms 44-28 including 5-1 in overtime. Lehigh Valley was 0-for-4 on the power play while St. John’s finished at 2-for-6 while also allowing one shorthanded goal.

The Phantoms return to PPL Center on Saturday, March 25 against the Wilkes-Barre/Scranton Penguins on meLVin Garden Gnome Night for the first 2,500 kids age 14 and under presented by Capital Blue Cross and Service Electric. Then on Sunday, March 26 at 5:05 p.m. the Phantoms host the Bridgeport Sound Tigers on Silver Phantoms Night featuring special discount packages exclusively for fans 60 and older including a game ticket, food voucher, Phantoms silver blanket, Phantoms grocery tote-bag and more.
Tickets for upcoming games can be purchased at PPLCenter.com or call the Phantoms at 610-224-GOAL (4625) for further information.