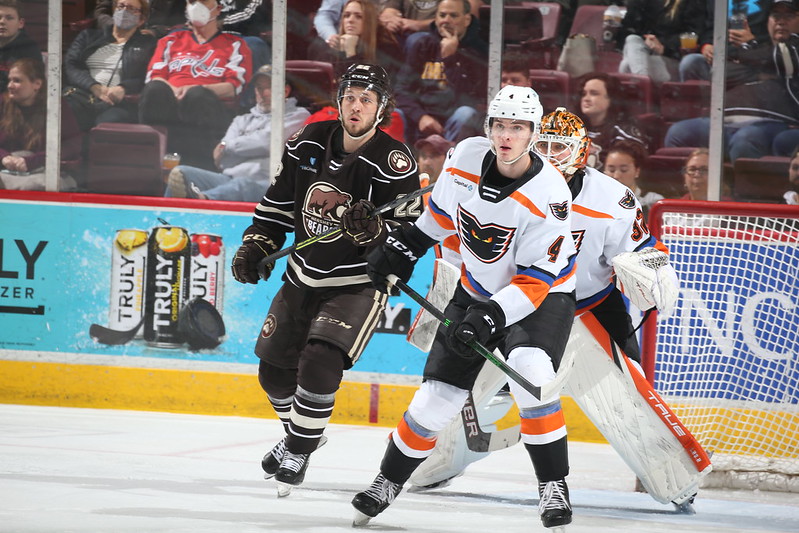 Hershey, PA – Wade Allison (7th) scored the fastest goal of the season for the Lehigh Valley Phantoms with his backdoor blast from the left circle just 20 seconds into the game. But Lehigh Valley was unable to break through against Pheonix Copley after that as he backstopped the Hershey Bears to a 5-1 win on Wednesday night at Giant Center.

Beck Malenstyn (9th, 10th) scored a pair of goals to lead the Hershey offense while Cody Franson and Mason Morelli each had two assists.

Lehigh Valley (22-26-10) had 26 straight shots on goal denied after the initial conversion. They even got pucks past Copley on two different occasions in the second period but were unable to find goals. Linus Sandin had a try down low after a Clendening shot gave Copley trouble. But Shane Gersich rotated behind the goalie and swept the puck out of the blue paint before it rolled across to the line.

Cal O’Reilly and Adam Johnson looked like they had scored late in the second period. The whole team had celebrated. But the referee immediately waved it off as no goal either determining that the puck had not gone in or that play had been halted before it crossed the line.

Egor Zamula sent the puck up the right side shortly after the opening faceoff and speedy Adam Johnson streaked past the defender to get there first. Johnson flicked the puck across to the open Allison on the left circle who buried it before Copley could rotate over.

Allison is on a seven-game point streak dating back to January. He has scored goals in six of the seven games in that stretch with a total seven goals with five assists for 12 points in the streak that was interrupted for almost two months due to injury. Since returning to the lineup on March 11, Allison has played in four games scoring four goals with five assists for nine points. 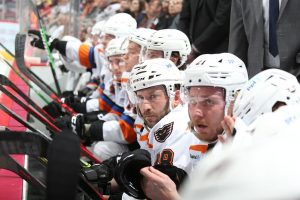 The Phantoms enjoyed an 8-1 shots advantage to begin the game and were off to a great start. But Hershey put its game together and started generating chances at Felix Sandstrom.

Eventually, Shane Gersich (12th) would score from the right circle after a cross-ice feed by Phantoms’ alum Mike Vecchione from the left of the cage.

Just 89 seconds later it was Aliaksei Protas (6th) at the net-front getting a piece of a Cody Franson point-shot from the right boards for a deflection to the upper-left corner and a 2-1 lead for the Bears.

Hershey (30-23-8) kept charging ahead in the second period but the Phantoms hung on with key blocks and some good saves through traffic for Sandstrom.

Lucas Johansen (7th) saw an opening to step up from the blue-line and Cody Franson zipped an opportunity across the ice for another backdoor goal and a 3-1 lead with 5:35 remaining in the second period.

This time it would be 83 seconds between Hershey’s consecutive goals with Beck Malenstyn hammering a big one-timer in the high slot off a feed from Bobby Nardella to beat Sandstrom to the stick side and provide a 4-1 lead.

Lehigh Valley killed a pair of late Hershey power plays and then went on the man-advantage attack for themselves. But a Beck Malenstyn steal resulted in a shorthanded breakaway goal with 2:09 remaining to complete the scoring.

The Phantoms have lost their last three games against their rivals from Chocolatetown while they’ve gone 4-0-0 in that stretch against all other opponents NOT Hershey. Lehigh Valley is 5-4-1 against the Bears this season with four games remaining in the season series.

Lehigh Valley is 2-2-0 on its six-game road-trip which concludes this weekend with a pair of games north of the border. The Phantoms travel to Laval, Quebec for a Friday night matchup against the Laval Rocket which will be followed by a Saturday tilt in Belleville, Ontario against the Senators.