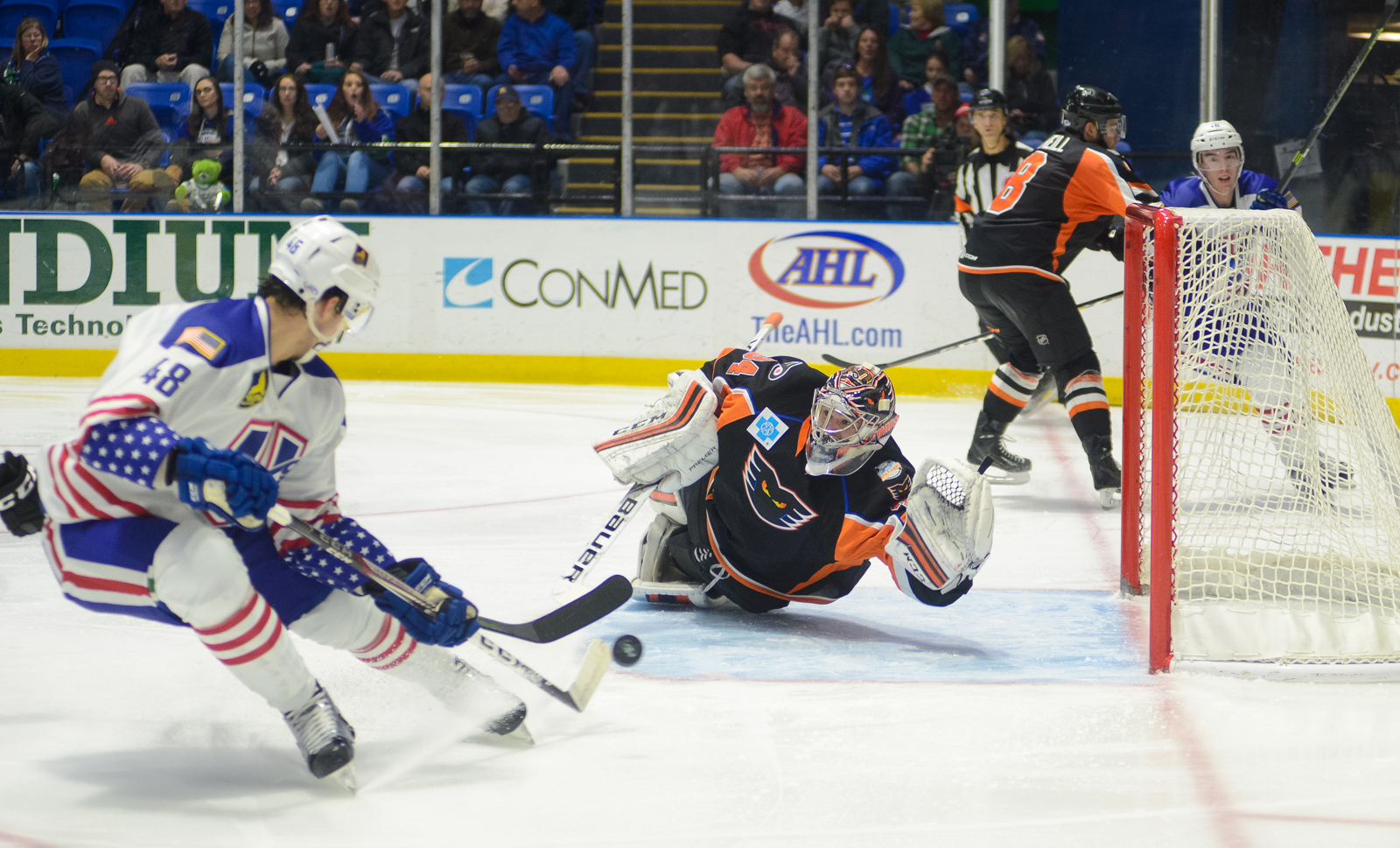 Utica, NY – Alex Lyon backstopped the Phantoms to a 4-1 victory at the Utica Comets providing the rookie backstop with his first career professional victory. Lyon made 26 saves in a solid effort that included several impressive kick stops from close range attempts.

Corban Knight (3rd), Reece Willcox (1st), Colin McDonald (6th) and Nic Aube-Kubel (3rd) provided plenty of offensive support for the high-flying Phantoms. 20-year-old Aube-Kubel’s goal came on a penalty shot late in the middle period that included some nifty forehand-to-backhand moves eventually culminating in a silky finish with the top-shelf backhander over the right shoulder of Richard Bachman. With another four-spot, the Phantoms offense continues to rank second in the AHL and first in the Eastern Conference at 3.9 goals per game.

Lehigh Valley seemed confident and in charge in their quick visit to upstate New York. And the Phantoms took control early with Radel Fazleev and Mark Zengerle neatly winning the puck on the forecheck to connect with an open Corban Knight in the slot who successfully drove the net to bury his third of the season just over two minutes into the game.

The rest of the period would remain scoreless but both Alex Lyon and Richard Bachman received plenty of valid challenges. Colby Robak took advantage of a bouncing puck to create a Utica breakaway but his drive past the glove of Lyon rang off the inside of the right post and somehow stayed out.

The Phantoms would score three straight in the second period to mostly salt the game away. Down two men after a series of penalties, the Phantoms worked through a difficult penalty kill and eventually raced away with a 2-on-1 just as a player returned from the penalty box. Knight slid a perfect pass across the slot to Willcox on the backdoor who buried his first of the season and second of his pro career. The tally was also the third shorthanded goal of the season for the Phantoms.

Preserving a 2-0 lead, Lyon made one of his best stops of the night on a diving, sprawling effort across to deny the snake-bit Colby Robak on the backdoor of a 2-on-1. Robak also had another tremendous effort in the third period that was rejected by Lyon as well.

Nearing the midway point of the game, Colin McDonald picked the pocket of a Utica defender with a nifty steal. From the left circle, the Phantoms captain quickly wheeled around for a rapid shot on net that caught Bachman off-guard. McDonald’s sixth of the year was strikingly similar to the pivotal goal he scored in the previous game when he broke a 4-4 tie late in the third period against Springfield after Laughton’s shot broke a defender’s stick and laid there in the circle for McDonald to pull off almost the same move; a quick spin-around and low shot on net from the left ring.

Aube-Kubel caught a lead pass for a breakaway but was spun around by Audrey Pedan who grabbed him by the left arm. Aube-Kubel’s series of silky moves on the first penalty shot of the season resulted in a 4-0 lead at 14:37 into the second period.

The penalty-shot conversion was the third all-time in the history of the Lehigh Valley Phantoms. Interestingly, all three have come on the road. Nick Cousins scored at Toronto on March 11, 2015 against Chris Gibson to complete a hat trick. Chris Conner scored the team’s lone penalty-shot goal last year on January 17, 2016 against Parker Milner of the Bridgeport Sound Tigers.
The only other penalty-shot effort was Kevin Goumas against Rochester at PPL Center on November 13, 2015 which he did not convert.

Utica got one of them back on a series of shots and rebounds that eventually led to their captain Carter Bancks with an open opportunity on the backdoor of another fine Lyon pad save. The Yale rookie couldn’t come up with this one, however, thus spoiling the bid for the shutout.

Lehigh Valley successfully ground down the clock in the final period to preserve their fourth straight victory. The Phantoms out shot the Comets 28-27. Lehigh Valley was 0-for-3 on the power play while holding to Utica to 0-for-5 with their own shorthanded goal.

The Phantoms improved to 6-3-1 overall heading into a Saturday night showdown with the North Division front-running Toronto Marlies who check in at 8-2-1.
Saturday’s game is also Boy Scout Night when the Toronto Marlies make their first and only stop of the season in downtown Allentown. A limited number of tickets remain for Saturday’s showdown and can be purchased at PPLCenter.com

Lehigh Valley concludes the weekend with a Sunday evening engagement at the Hershey Bears and then returns home on Wednesday, Novebmer 16 on Pink in the Rink tangling with the Wilkes-Barre/Scranton Penguins.