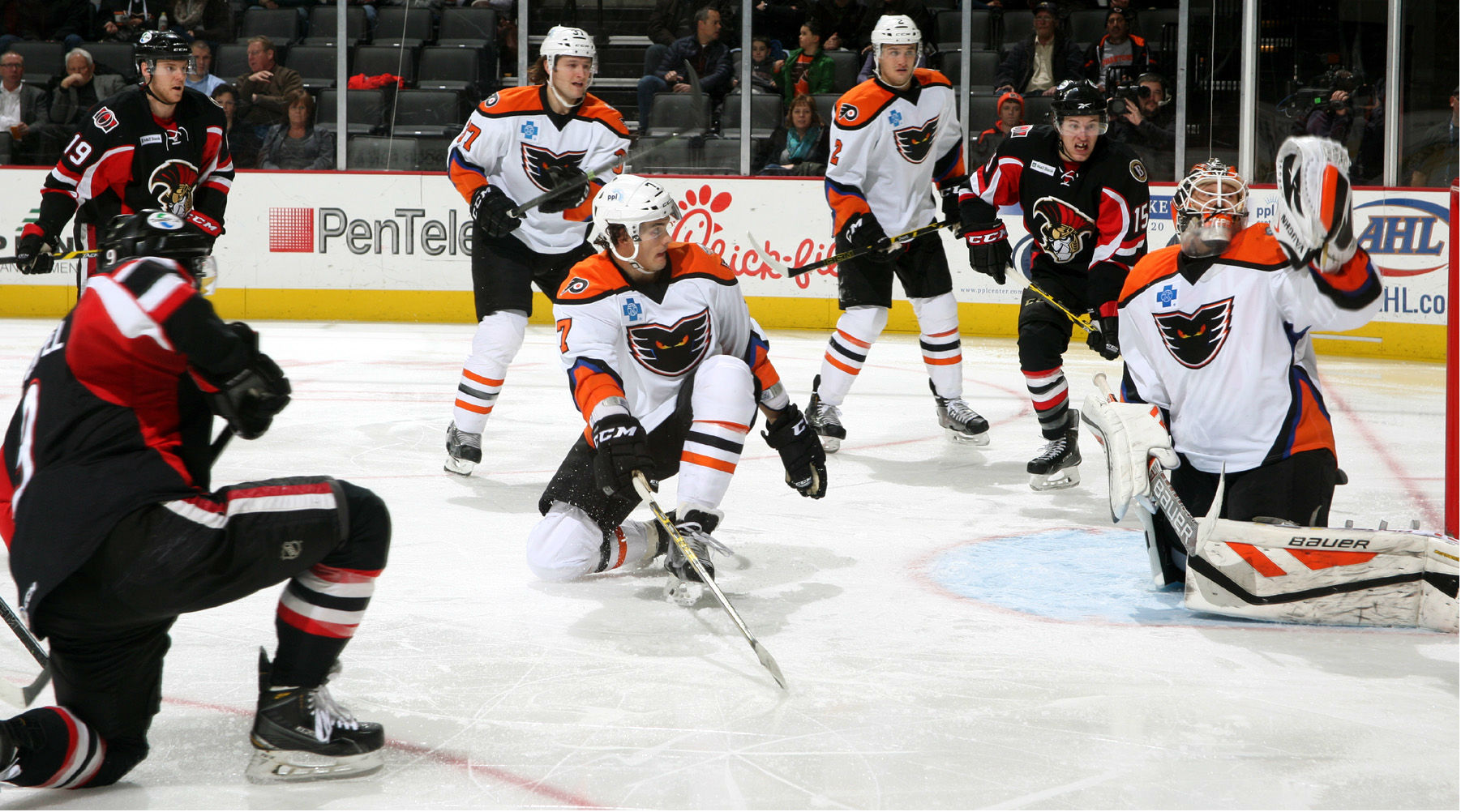 Binghamton, NY – The high-flying Binghamton Senators’ offense were able to overcome Lehigh Valley’s early 2-1 lead via a four-goal rally in the second period as the Phantoms dropped a New Years’ Eve decision 6-2.

Jason Akeson (7th) and Blair Jones (4th) both posted goals for the Phantoms in the first period while Brett Hextall notched a pair of assists. Akeson has now scored in back-to-back games while Jones has posted two goals in the team’s most recent three games.

The Phantoms are 2-2-0 against the Senators almost halfway through the 10-game season series. Their next chance for revenge will come on Saturday, January 17th when the Binghamton Senators visit PPL Center on Legends’ Night with Bobby Clarke.

Binghamton received goals from six different players while two posted Gordie Howe Hat Tricks.
David Dziuurzynski (3rd) and Shane Prince (11th) both scored for the Senators in the opening period which was tied 2-2.

Then the four-goal outburst in the second period for the AHL affiliates of the Ottawa Senators showed lamplighters from Cole Schneider (11th), Alex Grant (5th), Derek Grant (12th) and Matt Puempel (7th).

Both Puempel and Alex Grant recorded a goal, assist and fight in the game to receive Gordie Howe Hat Trick honors.

Ryan White made his Flyers’ organizational debut playing in the first-game of his conditioning assignment with the Phantoms. The veteran center formerly of the Montreal Canadiens recovered from surgery on a torn left pectorlis muscle on August 28 and in his first game of the season joined Lehigh Valley’s third line for much of the night serving as the pivot for wingers Austin Fyten and Andrew Gordon while also seeing time on the penalty kill.

The Phantoms outshot the Senators 35-29 in the game. Lehigh Valley was 0-for-4 on the power play while Binghamton went 1-for-5. The Phantoms conclude 2014 with a mark of 14-12-5 in 31 games played. The next 37 games of the regular season will take place in the 2015 portion of the schedule beginning this weekend with Friday and Saturday matchups down south in Norfolk, Va. against the Admirals, AHL affiliate of the Anaheim Ducks.

The next home games for Lehigh Valley are on Friday, January 16 and Saturday, January 17 against the Albany Devils and Binghamton Senators. Tickets are going fast and the Phantoms could potentially reach their eighth and ninth PPL Center sellouts of the season. The January 17th game is Legends’ Night with Bobby Clarke featuring one of hockey’s all-time greats who also was the first general manager of the Philadelphia Phantoms and helped construct Calder Cup Championship teams in 1998 and 2005.

For tickets to upcoming Phantoms games, log on PPLCenter.com or call 610-347-TIXX (8499) or stop by the Mealey’s Furniture Box Office at the main entrance of PPL Center.