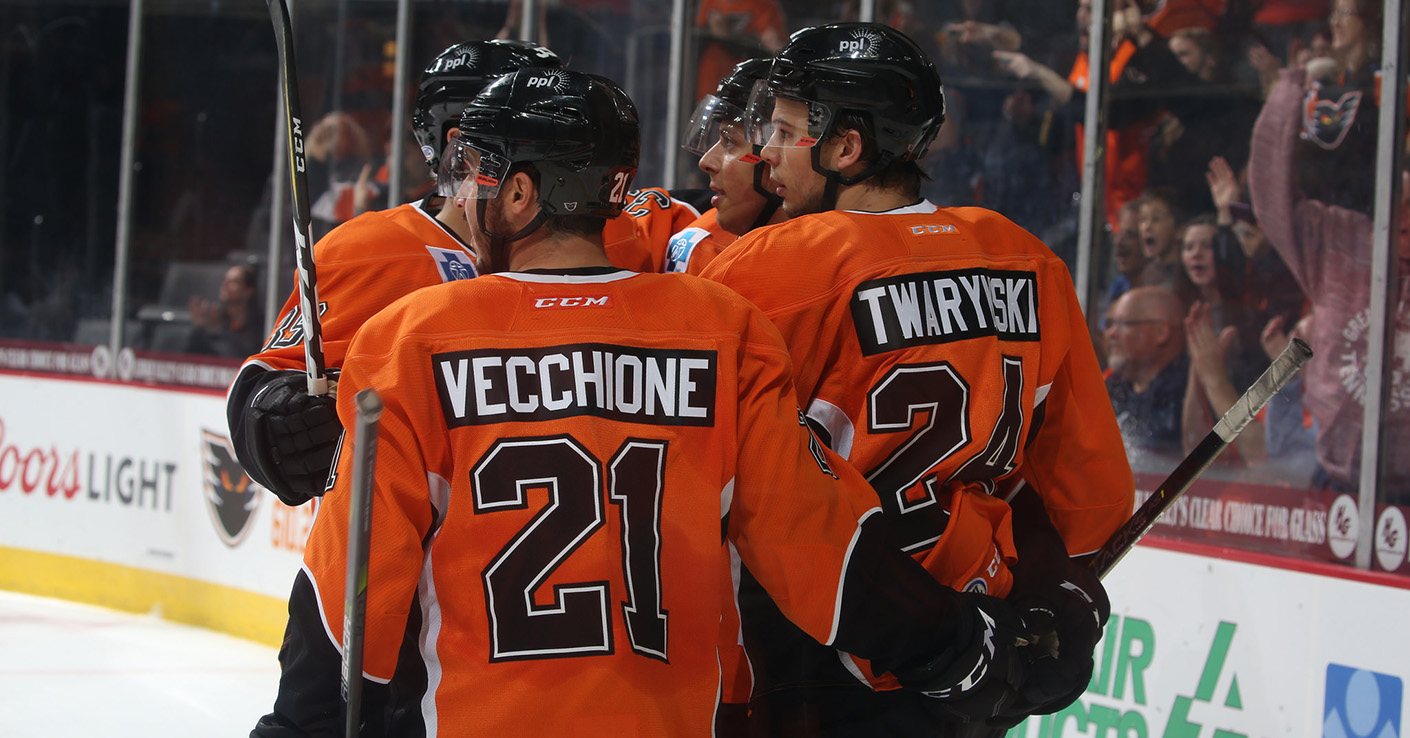 The Lehigh Valley Phantoms will drop the puck on their fifth season inside of PPL Center in downtown Allentown on October 6 and, with the 2018-19 season coming closer into view, the team is both reenergized and reinvigorated after their deep run into the Calder Cup Playoffs last year.

With training camp in progress and the battle for another Atlantic Division crown looming, here are five things that will get Phantoms fans pumped up for drop of the puck.

The Philadelphia Flyers’ organization has quickly become one of the NHL’s most heralded farm systems and this season, the Phantoms will reap those rewards yet again. On top of the already familiar names — like Colin McDonald, T.J. Brennan, Chris Conner and Phil Varone — that will be returning to the club for another crack at the Calder Cup, the Phantoms are also going to be loaded with even more explosive young talent.

That list will include 2018 Memorial Cup Champion German Rubtsov, 2016 third-round draft pick Carsen Twarynski, two-time CHL Goaltender of the Year Carter Hart and many more exciting players to fill out the team’s already heavily stocked prospect cabinet. The Phantoms’ combination of veterans and prospects will again make for one of the AHL’s most dynamic rosters.

Despite a first-round exit during the 2017 Calder Cup Playoffs, it was the first time the team had qualified for the postseason since moving to the Lehigh Valley in 2014.

Building off that run into the playoffs, the Phantoms rebounded with their best season since the team was in Philadelphia.  In fact, their 104 points (47-19-5-5) were the most the franchise has tallied in a season since 1998-99, and it was also the first time the franchise won their division since the 2003-04 season.

The team took another step forward in the 2018 postseason, pushing all the way to the Eastern Conference Finals before bowing out to the eventual Calder Cup winner Toronto Marlies. Expectations are again high for this team as, not only a playoff contender, but one of the favorites to advance to the Calder Cup Final.

Heated Rivals and a New Foe

What’s better than an intense rivalry?

The Phantoms will find themselves matched up against both the Hershey Bears and Wilkes-Barre/Scranton Penguins 12 times in 2018-19.

While the Bears finished last in the Atlantic Division in 2017-18, an all-new lineup and revamped coaching staff could put them right back into contention.  Despite the departure of some key names, like Chris Bourque, and graduations to the NHL, Hershey will push forward and look to remind everyone why they have been an 11-time Calder Cup Champion.

The Penguins, who battled the Phantoms all season long during 2017-18 and 2016-17 for Atlantic Division supremacy, will once again look to do the same in 2018-19.  Similar to the Bears, the Pens have had a number of grads reach the NHL, but Lehigh Valley’s heated rival — looking to qualify for the playoffs for the 17th consecutive year — will provide another tough test for the Phantoms throughout the season.

Similar to the 2017-18 season with the Charlotte Checkers, the Phantoms will again see another new team on this season’s schedule; the Cleveland Monsters.

After spending the past three seasons in the AHL’s Western Conference, the Monsters are moving over to the East, which will pit them against the Phantoms four times this upcoming season. While Cleveland has failed to make the playoffs for two straight seasons, not long ago the Monsters hoisted the Calder Cup, in 2015-16, when they defeated the Hershey Bears.

With so many of the 2017-18 Phantoms roster coming off of strong seasons, it’s given the Flyers reason to give some of them a longer look at their training camp that started on September 14.

Players likely to graduate to the NHL this year include: Oskar Lindblom, who tallied 34 points (16G-18A) with the Phantoms this past season; Mikhail Vorobyev, who notched nine goals and 20 assists last year; and Travis Sanheim, who recorded an eight-game point streak (1G-12A) and 16 total points in just 18 games with the Phantoms.

Other young Phantoms players on the cusp of the NHL include second-year defenseman Philippe Myers, who finished with five goals and 16 assists for 21 points this past season, rookie Carsen Twarynski who joined the team at the end of the 2017-18 season on an ATO and tallied a goal and an assist in five games and forward Mike Vecchione who finished the preseason with three points (2G-1A) in just two games.

Early season call ups for the Flyers could also come in the form of players like Tyrell Goulbourne, Nic Aube-Kubel, Vecchione and Myers.

Records Could be Broken

The Phantoms have some players knocking on the door of a few all-time franchise milestones. Forward Chris Conner can crack the Phantom’s all-time top-10 points scoring list if he tallies just 13 more points. Conner also needs just 14 goals and 18 assists to earn his way into the top-10 in each of those respective categories.

Five-time AHL All-Star defenseman T.J. Brennan is also close to overtaking former Phantom John Slaney for first place in all-time goals scored by an AHL defenseman.  Currently with 148 goals during his decade-long career, Brennan is only 18 goals away from tying Slaney (166) and 19 away from taking sole possession of the record.