Lehigh Valley, PA – Coming off an exciting weekend-series sweep at the first-place Springfield Thunderbirds, the Phantoms six-game road-swing continues this week with three more games including a pair of contests north of the border. Cal O’Reilly is scheduled to play his 1,000th professional game on Friday in Laval, Canada. The Phantoms have played 57 games in the 2021-22 regular season and have 19 remaining. 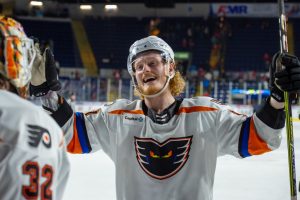 Friday, March 18, 2022
Phantoms 3 – Springfield Thunderbirds 1
Felix Sandstrom had one of his strongest games of the season in a 32-save masterpiece while the Phantoms’ penalty-kill was exceptional in holding high-powered Springfield to 0-for-6 on the power play in a 3-1 win on Friday night at Springfield. Adam Johnson scored his first goal as a Phantom while Egor Zamula and Tanner Laczynski also tallied markers. Springfield had a 6-on-4 and 6-on-5 for the last 5:30 of the game but the scrappy Phantoms blocked shots and deflected passes and fought off the T-Birds to the end.

Saturday, March 19, 2022
Phantoms 7 – Springfield Thunderbirds 4
Lehigh Valley racked up seven goals for the first time this season including two apiece from Cal O’Reilly and Wade Allison. Egor Zamula had three assists while Tanner Laczynski scored for a second consecutive night. Isaac Ratcliffe and Charlie Gerard also found the back of the net. Allison added two assists for the first four-point performance of the season for the Phantoms. 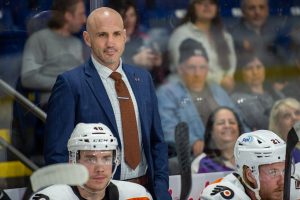 Upcoming
Wednesday, March 23, 2022 (7:05)
Phantoms at Hershey Bears
Lehigh Valley (22-25-10) travels to Chocolatetown for the 10th of 14 meetings between the Keystone rivals. Lehigh Valley has lost their most recent two visits to Giant Center without scoring a goal in 4-0 and 2-0 shutout losses dealt by Zach Fucale. The Phantoms still have the edge in the series with a 5-3-1 record against the Bears. Hershey (29-23-8) dropped three straight last week with just a single overtime-loss standings point at Belleville in a rough road-trip through Canada that concluded with a 5-1 loss at Laval on Wednesday. Phantoms’ alum Mike Vecchione is the team’s active leading scorer with 12-24-36. He recently returned from the Washington Capitals where he played in his first NHL game since signing with the Flyers and playing 2 games for Philadelphia in 2017-18.

Friday, March 25, 2022 (7:00)
Phantoms at Laval Rocket
The Phantoms travel to the greater Montreal area for a rematch with Laval (28-21-3). The Rocket are in second place in the North Division behind only the Utica Comets. Lehigh Valley defeated Laval on March 11 in a come-from-behind effort. After trailing 3-1 in the second period, Wade Allison produced two assists and then scored the game-winning power play goal in the third in a 4-3 thriller at PPL Center. Phantoms’ alum Danick Martel has scored 10-12-22 with the Rocket. Philadelphia-area native Cayden Primeau has returned to the Rocket from Montreal. The goaltending prospect is the son of former Flyers’ captain Keith Primeau and played for Bishop Eastace Prep and the Philadelphia Revolution. Primeau (12-9-1, 2.85, .910) recorded a 20-save shutout the last time the Phantoms visited Place Bell in Laval on Janaury 3, 2020 in a 4-0 win for the Rocket.

Saturday, March 26, 2022 (7:00)
Phantoms at Belleville Senators
Troy Mann’s B-Sens and the Phantoms meet for the final time this season in the last game of Lehigh Valley’s six-game road-swing . Belleville (28-23-2) ranks fifth in the North Division. Filip Gustavsson had a 21-save shutout at PPL Center on February 5 in a 5-0 decision that is the largest margin of defeat for the Phantoms this year. Former Flyer Michael Del Zotto had one goal and two assists in that game. Former Wilkes-Barre/Scranton Penguin Jake Lucchini leads the team with 16-20-36. Phantoms’ alum Tyrell Goulbourne returned to the Belleville lineup last weekend following a three-month absence. The popular and rugged forward played 223 games for the Lehigh Valley Phantoms from 2015-19 scoring 25 goals with 41 assists for 66 points while amassing 313 penalty minutes. He also played in 11 games with the Philadelphia Flyers and 36 games with the Reading Royals of the ECHL to account for a total of 270 games in the Flyers’ organization. 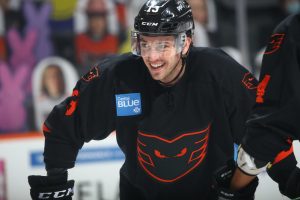 Transactions
– Connor Bunnaman and German Rubtsov were traded to the Florida Panthers in the Claude Giroux deal on Saturday. Both players have been loaned by Florida to the Charlotte Checkers.
– Tyson Foerster has been loaned back to his Major Juniors team with the Barrie Colts of the Ontario Hockey League. Foerster has been practicing and skating with the Phantoms but has not played since a shoulder injury in November.
– Ryan Fitzgerald was activted from injured reserve in Philadelphia and subsequently loaned to Lehigh Valley. The team’s leading goal-scorer in the 2020-21 season has not played this season due to hip surgery during training camp in September.
– Gerry Mayhew was claimed off waivers by the Anaheim Ducks. Mayhew scored 9-7-16 in 24 games with the Phantoms and led Lehigh Valley in goals at the time of his recall to Philadelphia where he scored six goals in 25 games.
– Defenseman Garrett McFadden has been recalled to the Phantoms from the Reading Royals of the ECHL.

PHANTASTIC!
– Cal O’Reilly is currently at 998 pro games (AHL, NHL, KHL combined) and is projected to play in his 1,000th pro game on March 25 at Laval. Earlier this month, he became the 41st player to reach 800 AHL games.
– Cal O’Reilly has 18 goals this season to equal a personal high. The 35-year-old captain of the Phantoms also had 18 goals in a season 15 years ago in the 2006-07 season when he was a 20-year-old rookie with the Milwaukee Admirals. Cal has five goals in his last five games including a pair of two-goal games.
– Wade Allison is on a six-game point streak from January 14 through March 19. He also had an unusual 4-game goal streak from January through March that included an almost two-month hiatus due to injury. He has goals in five of his last six games with Lehigh Valley including a four-point performance on Saturday at Springfield which is the most for any Phantom in a game this season.
– The Phantoms have played 57 games and have 19 remaining in the 2021-22 regular season.
– The Phantoms trail Wilkes-Barre/Scranton by six points for the last playoff spot in the Atlantic Division and Lehigh Valley also has one game in hand. The Phantoms and Penguins have three games against each other in April including in the season finale on April 30 at PPL Center. The top 6 teams in the Atlantic Division qualify for the playoffs.