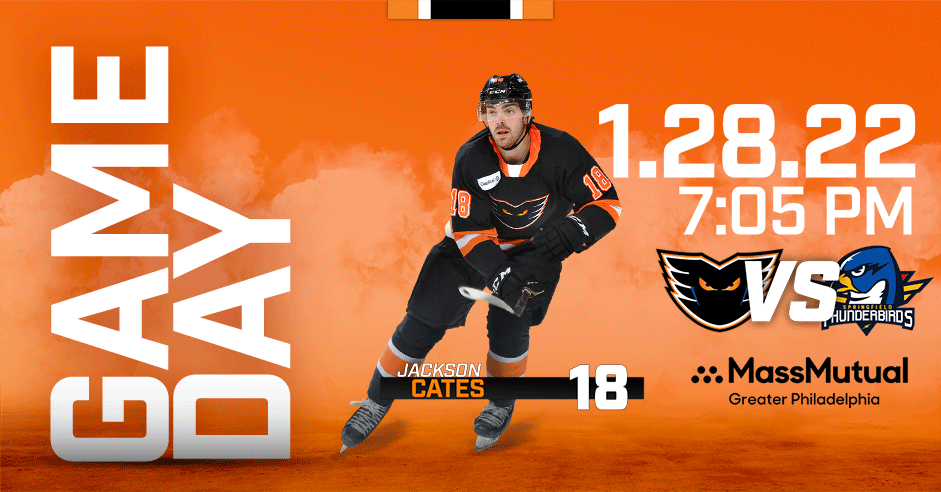 TONIGHT: It’s a Phantoms Gameday presented by MassMutual as the Lehigh Valley Phantoms play Game 4 of a five-game road swing with their first visit this season to Springfield, Mass. The Springfield Thunderbirds (19-13-5) are the AHL affiliate of the St. Louis Blues and are holding onto the fourth-place spot in the Atlantic Division..   Lehigh Valley (12-13-8) has points in 12 of the last 14 at 9-2-3 and rates in 6th place in the Atlantic Division. Springfield took a 2-1 overtime decision at PPL Center in November in the only previous meeting of the season between the two teams.  The Phantoms are 2-1-0 so far on their road swing which ends Saturday night at Hartford.

LAST TIME: Wyatte Wylie racked up a career-high three assists as the Phantoms picked up a weekend split at the Charlotte Checkers with a 5-2 win on Sunday afternoon. Hayden Hodgson (7, 8) capped the victory with a pair of goals including an empty-netter at the end. Pat Nagle (6-0-3) had 24 saves including a big breakaway denial on Kole Lind when the Phantoms were preserving a one-goal lead. Connor Bunnaman (6th) and Matt Strome (1st) also scored for the Phantoms.

OLYMPICS HONOR: Pat Nagle has been chosen to play for the United States National Team at the upcoming 2022 Winter Olympics in China. The 34-year-old veteran goalie will depart the Phantoms on Sunday and will be away with the American team for three weeks. Congratulations, Pat!!

SPRINGFIELD THUNDERBIRDS: The AHL affiliate of the St. Louis Blues is in third place in the Atlantic Division at 19-12-5 but the T-Birds only have three wins in their last 10 games. Veterans Matthew Peca (13-16-29) and Sam Anas (11-16-27) pace the offense with former Hershey Bears forward and Australia native Nathan Walker (10-15-25) rating highly as well on one of the highest scoring teams in the league. Springfield bested the Phantoms 2-1 in overtime on November 13 in the only meeting of the season between the two teams.

NOTEABLES:
– Linus Sandin made his NHL debut on January 25 for the Philadelphia Flyers at the New York Islanders. Sandin has scored 5 goals in his last 7 games with the Phantoms. He beccame the 34th Lehigh Valley Phantom to make his NHL debut with the Flyers on a recall and the third this season joining Max Willman and Felix Sandstrom.
– Wyatte Wylie’s three-assist game on Sunday was his new career-best for points in a game and is tied for the most points in a game by any Phantoms player this year.
– Lehigh Valley has gone 9-2-3 in its last 14 games after a beginning that saw just three wins in the first 19 games at 3-11-5.
– Cal O’Reilly has 12 points (3-9-12) in his last 8 games including four multi-point games in that stretch.
– Defenseman Adam Clendening has 10 points (2-8-10) in his last nine games including three multi-point games in the last six.

UP NEXT: The Phantoms head down I-81 to Hartford for a Saturday night road-trip finale at 7:05 p.m. The Phantoms are back at home on Sunday at 5:05 p.m. against the Hershey Bears.