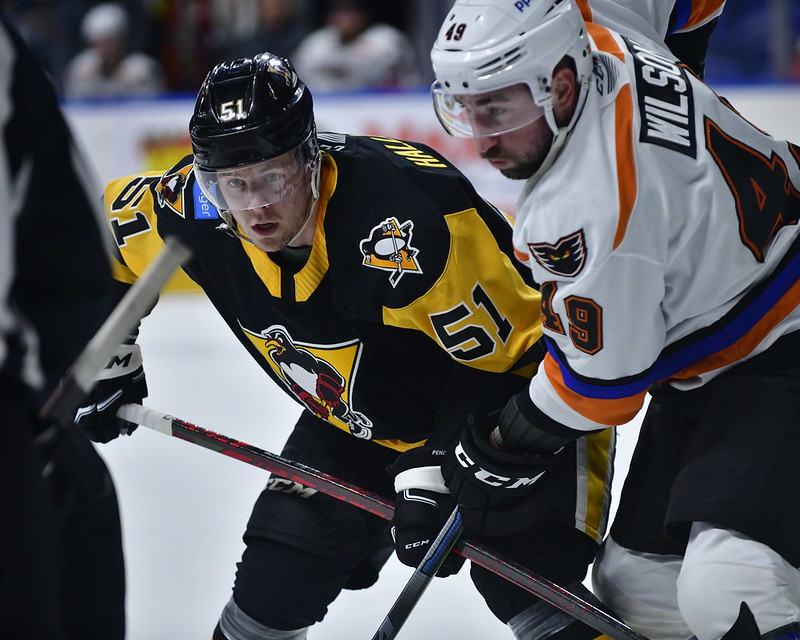 Wilkes-Barre Twp., PA – Hayden Hodgson scored his team-leading 19th goal of the season in his first game back with the Phantoms but Louis Domingue hung on the rest of the way in a 30-save performance as the Penguins pulled through 3-1 on Wednesday night.

Lehigh Valley (25-28-11) saw its three-game win streak come to a close. The game also marked the end of the Phantoms’ streak within the series of three straight wins at Wilkes-Barre/Scranton’s arena. The night also was the milestone 500th AHL game for Phantoms’ veteran forward Garrett Wilson.

Wilkes-Barre/Scranton (31-27-8) was led by Jonathan Gruden’s pair of goals including a shorthanded marker in the second period and an empty-netter to essentially seal the win.

The Phantoms fell just short in their efforts for another come-from-behind win. After Hodgson got the Phantoms on the board with 5:30 left to pull Lehigh Valley to within a goal. the team had some strong chances down the stretch in search of an equalizer. Hodgson was robbed at the doorstep off the pad of Domingue with about 2:10 left as part of a frenetic scramble. But the veteran goalie eventually found the puck and got a whistle to hold off the attack. 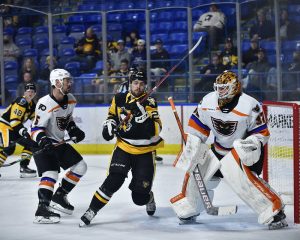 Sam Poulin (16th) opened the scoring when he buried the rebound of a shot by Felix Robert that was blasted up high and handcuffed goalie Felix Sandstrom. The Penguins took a 1-0 lead with 1:48 remaining in the first period.

Lehigh Valley had three straight power plays from the end of the first period through the opening minutes of the second period. But the team’s man-advantage was unable to find the same chemistry that struck for three power-play goals on Sunday and had been clicking at 29.6% in the previous seven games.

Eventually, it was Wilkes-Barre/Scranton who scored at the end of Lehigh Valley’s third power play. Matt Bartkowski got to a puck along the boards and sent Drew O’Connor zipping up the right wing where he found Gruden on the backdoor on their 2-on-1 rush. The shortie with 10:58 remaining in the second period gave the Penguins a 2-0 lead.

The Phantoms dominated play in the third period with a 10-3 shots advantage and eventually broke through with 5:30 left on a sequence that began with a strong retrieval by Adam Clendening. Cal O’Reilly helped nudge the puck up along the boards to Max Willman in the neutral zone moving up the left wing. Willman’s pass to the middle connected with Hodgson busting in across the line who ripped a shot to the left-post side of the cage just past the glove of the lefty-style playing Domingue.

It was Hodgson’s first game back with the Phantoms after playing his first five career NHL games with the Flyers over the past two weeks. His 19th goal of the season gives him sole possession of the team lead in lamplighters ahead of Cal O’Reilly who has 18.

Hodgson and O’Reilly had a couple in-tight chances with just barely over two minutes left but were denied at the doorstep. After Sandstrom was pulled, Gruden would score an empty-netter from the red line along the boards with 1:35 left to make it 3-1.

The Phantoms had another power play with over a minute left but even a 6-on-4 wouldn’t be enough for them to break through and close the gap any further.

Lehigh Valley is 5-6-1 agains the Penguins this year. The two teams will meet again in the regular-season finale on April 30 in Allentown.

The Phantoms return to PPL Center this Friday hosting the rival Hershey Bears with fans encouraged to participate in a postgame skate.