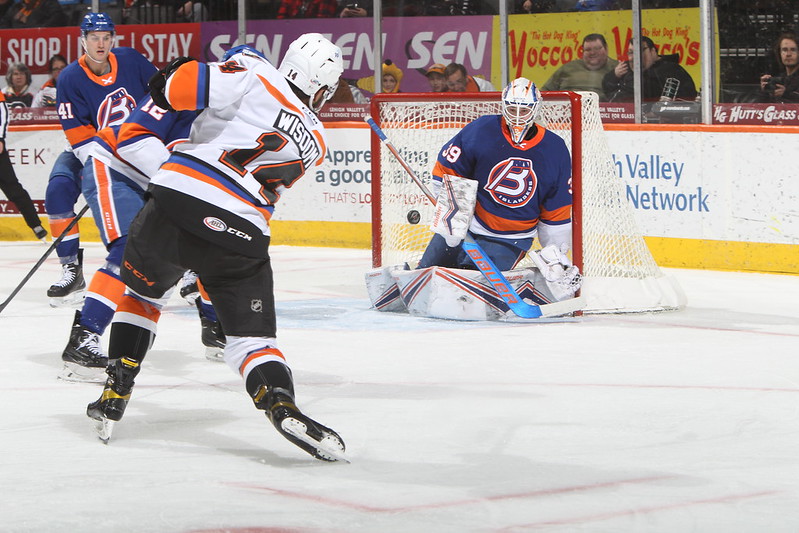 Lehigh Valley, PA – The Philadelphia Flyers have reassigned forward Zayde Wisdom from the Lehigh Valley Phantoms to the Reading Royals of the ECHL. Additionally, defenseman Adam Karashik was loaned by Lehigh Valley to Reading earlier this week.

Wisdom, 20, has scored one goal with six assists in 26 games with the Phantoms this season. He recently scored his first goal of the season on December 28 against the Bridgeport Islanders.

In the 2020-21 season, Wisdom became the youngest player in Phantoms’ franchise history when he debuted at just shy of 18 years and 7 months. He scored seven goals with 11 assists for 18 points in 28 games in that debut campaign including back-to-back two-goal contests in just his third and fourth professional games. But his 2021-22 season was delayed due to off-season shoulder surgery and he did not play for the Phantoms, instead returning to the Kingston Frontenacs of the OHL where he scored 9-29-38 in 43 games.

The 5’11” right wing from Toronto was a Round 4 selection of the Philadelphia Flyers in the 2020 NHL Entry Draft. This is Wisdom’s first assignment to the Reading Royals who have an away game tonight at the Wheeling Nailers.

Karashik, 24, is a 6’0″ defenseman from Ridgefield, CT who played collegiately at UConn and Notre Dame. He joined the Phantoms at the end of the 2021-22 season playing in eight games and has played in three games with Lehigh Valley this year while overcoming multiple injuries. He joined Reading last Saturday for his third game with the Royals this season.