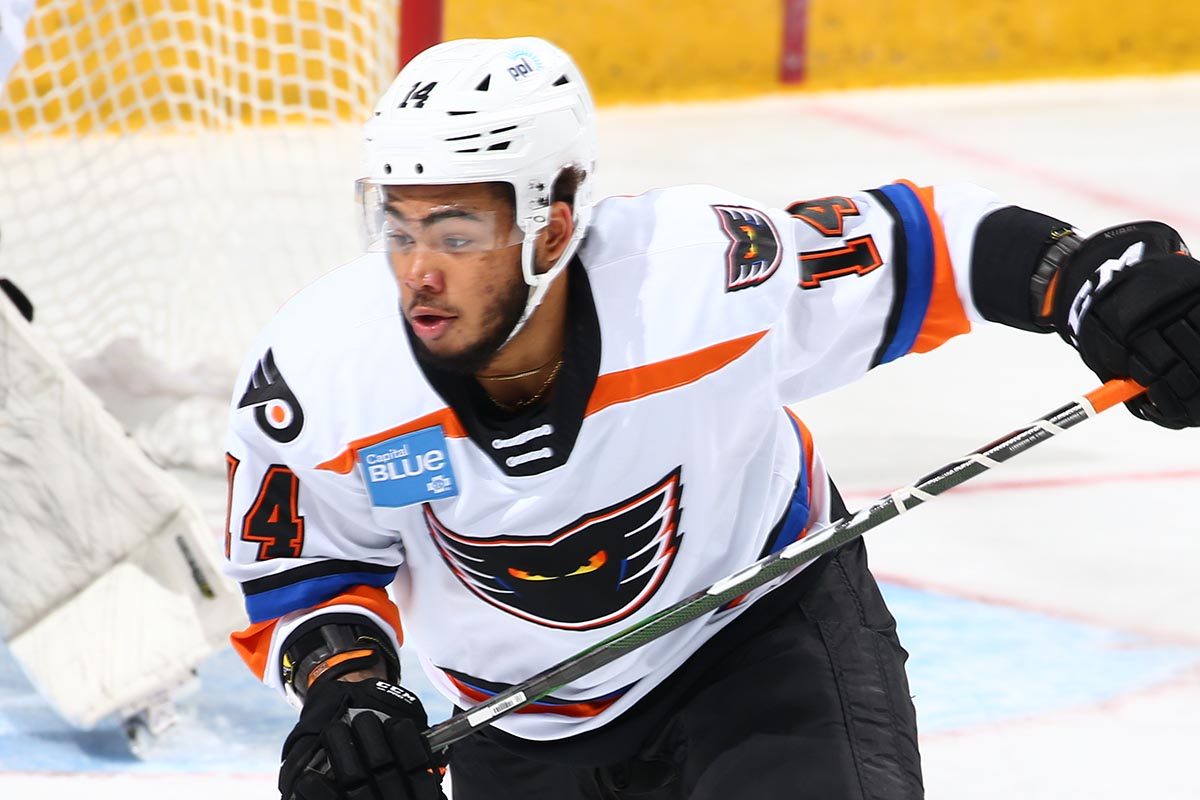 “I wasn’t even supposed to be here today.” — Dante Hicks, Clerks.

That famous line from the 1994 film from Kevin Smith could also apply to Lehigh Valley Phantoms rookie Zayde Wisdom even though he was born eight years after the movie.

The 18-year-old rookie, who was a fourth-round selection of the Philadelphia Flyers in the 2020 NHL Draft, would normally be playing another season with the Kingston Frontenacs in the Ontario Hockey League. But very little is “normal” these days. And with the start of the OHL season still on pause, the contracted players from that circuit received the opportunity to play in the American Hockey League instead.

The youngest player in Phantoms franchise history is making the most of his chance to play with the older men. Back-to-back two-goal performances in just his third and fourth games ever as a pro has the Toronto native drawing rave reviews from coaches, media, teammates and fans.

As of a few months ago, Wisdom was continuing workouts and increasing his strength and weight without knowing if or when or where he might be playing hockey again.

At the draft in October, it was the Philadelphia Flyers who were motivated.

“Somewhat surprising to us, Wisdom was still available late in the third,” said Flyers general manager Chuck Fletcher. “We scrambled to try to select him.”

Trading a pair of lower picks to move up in the draft seems to have worked out well.

“Unbelievable compliment,” Wisdom said. “Couldn’t have been any happier to hear that for sure. That ties in with the confidence side of things. I know deep down that these guys believe in me and these guys want me here and I’m here for a reason. I’m just playing to stay and trying my best and do all I can to stay and make this a living because that’s always been the goal, to make hockey my job.”

Entering a season playing with and against grown men, there were no guarantees that Wisdom would be this good so quickly. There was only one way to find out for sure whether he could measure up at this level. And without having played any games at all in the last 11 months there was also a feeling-out process just getting back into it.

“My first game, the butterflies were unbelievable,” Wisdom said. “Those first couple games just touching the puck and kind of get the feel of it and get the speed and the toughness and first-person view. By that third game that’s when you’re like, ‘Okay, maybe I do belong here. Maybe I can keep up with the pace,’ and that’s where the confidence starts to come in and your confidence starts to build. And those (first) two goals definitely helped the confidence out a ton.”

“He’s fit in. He’s comfortable,” Phantoms head coach Scott Gordon said. “I think kind of eyes wide open when he first got here and first week of practice. Just throwing a lot of system stuff he hadn’t seen before. Really he looks like he’s played here for years. Credit to him. He’s done a good job of listening and executing and identifying what we’ve talked about.”

Gordon also notes that Wisdom’s focus and mentality and ever-increasing confidence is equally important in his rapid improvement.

“In general, his willingness to compete has translated into his ability to recover pucks. Even on the bench, he’s yelling at one of their players. Usually, an 18-year-old is going to be seen and not heard. But here he is barking at a guy who’s been in the league for five years.”

Gordon also knows that it isn’t always such a quick process with young prospects no matter how talented they are.

“We’ve had plenty of 20-year-olds that it’s a taken them awhile to adapt and some of them never adapt. You know, credit goes to the Flyers for not just getting talented players but getting players that can think the game too.”

Wisdom’s strong character has been well-documented prior to his arrival with the Phantoms. Growing up underprivileged and in poverty with a mom who sacrificed and worked three jobs to fund his hockey opportunities in the Greater Toronto Hockey Association has provided him with a perspective that is perhaps not as common in the hockey world.

“At the end of the day, everything does come down to: I play the game of hockey for her,” Wisdom said. “Whether it be for the money, whether it be because I love the feeling, whether it be because of anything. At the end of the day, the deepest reason why I play the game is to make her proud. Just seeing her now and seeing our situation get better and seeing everything kind of pan out, it definitely warms my heart. I couldn’t ask for anything more.”

“Obviously his story is remarkable,” Fletcher said. “Just incredible what he’s overcome to get to this point. He seems to have some strong people in his corner that have provided support for him along the way. He clearly has worked hard for everything he’s earned to this point.”

Wisdom has impressed so many in his journey with his upbeat personality and positive outlook and approach that he was awarded the E.J. McGuire Award of Excellence last fall, presented by the NHL to the draft prospect who best exemplifies commitment to excellence through strength of character, competitiveness and athleticism. Presenting the award to him was former Philadelphia Flyer and current Toronto Maple Leaf Wayne Simmonds, who is one of Wisdom’s biggest fans and is continuing a tradition in which hockey players of color are mentoring the next generation to follow in their footsteps.

“Flyers Nation is going to have a new fan favorite!!” Simmonds excitedly tweeted when Wisdom was drafted.

“Simmer’s kind of shown me the way,” Wisdom said. “He showed me how to be and showed me how to act. And even how to play. Simmer’s been an amazing mentor for me. It was an honor to receive that award and Simmer to be there and those guys presenting it to me. That was a pretty special moment for sure.”

In a season that has been like none other, providing opportunities that wouldn’t normally be available, Wisdom’s first games at the professional level and his initial success in the American Hockey League have come in the month of February: Black History Month. The new fan favorite in Lehigh Valley appreciates the significance and symmetry of the coincidence.

“My Dad takes it seriously,” Wisdom said. “He loves this month. He has taught me and my brother about it as much as he could when we were growing up. That’s crazy how it lines up. Coincidence? Maybe not. Maybe so. Guess we’ll never know.”

Hockey does not have as much diversity as many other sports but Wisdom sees a promising future ahead.

“I feel like hockey will get there eventually. Hockey is evolving a tremendous amount. Even just looking in the GTHA now, there’s so many young Black kids and other cultures joining the sport. It’s a lot tougher because of the money aspect. Hockey’s expensive, it definitely gets up there. I feel like eventually we will get to a day where we are proud of the sport and how far we have come and it will still be the best sport in the world.”

Almost certainly in the not-too-distant future, Zayde Wisdom will become a mentor for the next wave of talented young Black kids he speaks of just as Wayne Simmonds has provided guidance for him.