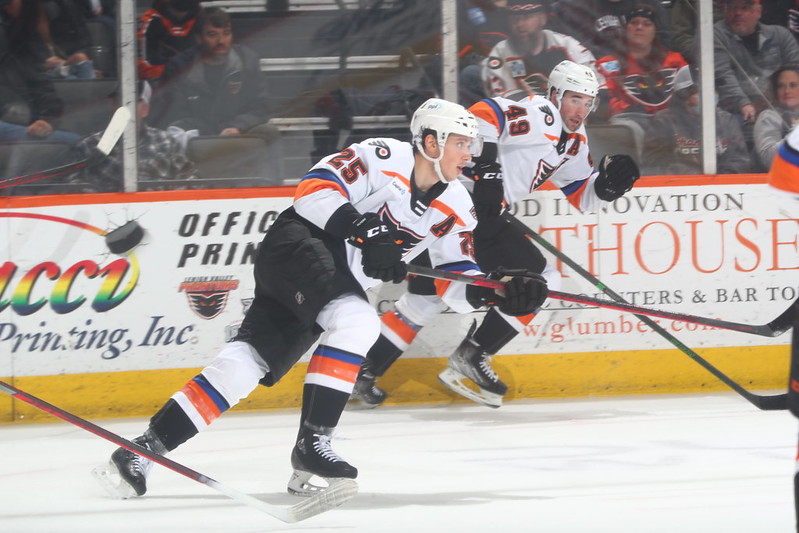 Phantoms Point Streak at Four After 4-3 Shootout Loss vs. Rochester

Lehigh Valley, PA – A breathless and frenetic end of regulation and a wild and tense overtime ended in a shootout win for the Rochester Americans when Adam Clendening’s bid for a tying goal in the third round heartbreakingly hit off the post and clanged away.

The crazy game was full of unexpected twists and turns as well as bounces. Garrett Wilson (6th) took advantage of a fortunate bounce out in front off the stanchion on what was supposed to be a dump-in. The fortuitous opportunity led to the tying tally with 50.4 seconds left as he was ready to hammer it home in the slot to force overtime at 3-3.

That goal, which drew raucous roars from the amazed PPL Center crowd, followed the Rochester Americans rallying for a pair of goals in the final 3:30 of the game to turn a 2-1 Phantoms’ lead into a 3-2 advantage for the Amerks. 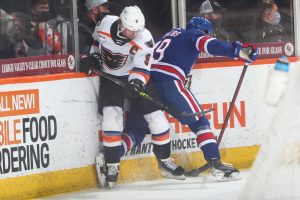 Connor Bunnaman (3rd) and Maksim Sushko (4th) also scored for the Phantoms. Rochester was led by its captain, Michael Mersch, who scored a pair of goals to take the league-lead with 14.

Sam Ersson was brilliant in net in his two periods of work. The rookie goalie was returning to action for the first time in seven weeks following an injury on October 29 but he was unable to complete the game and made way for Pat Nagle who entered in relief in the third and overtime. Ersson had made a fantastic save on young first-rounder Peyton Krebs who had a shorthanded breakaway in the second period. Ersson snagged the Krebs shot with the glove keeping the game deadlocked at 1-1 at the time.

Aaron Dell made some astonishing stops as well in his return to the Americans. Late in the third period, Linus Sandin was robbed on the backdoor with Dell scrambling to his left to prevent an insurance goal that would have given the Phantoms a 3-1 lead. About a minute later, it was Mersch on the backdoor in the Phantoms crease who ended up converting to tie it at 2-2.

The best stop of the game was by Dell in overtime on a wide-open opportunity for Connor Bunnaman in the slot on the rush. Cal O’Reilly’s drop from the side of the net perfectly connected with Bunnaman but Dell’s windmill motion with his left arm resulted in a truly astonishing glove save to keep the game tied at 3-3. That came after Rochester was buzzing on the power play they had in overtime. Nagle made several big stops and Cam York had one of the handful of nice blocks through the penalty kill as well.

Lehigh Valley struck first with Connor Bunnaman scoring for the second game in a row. Cam York navigated from the point to the slot and slipped a pass over to Bunnaman on the left of the cage who scored his third of the season top shelf. Gerry Mayhew also assisted on the play. The Phantoms led 1-0 at the end of one thanks to 11 strong saves for Ersson in his return to game-action.

Ersson kept up the tremendous work through the second, including the breakaway glove save on Krebs. But eventually Rochester broke through with 3:32 left in the second period with Brandon Biro finding Mersch on the backdoor who went down to a knee to score from the right side of the net for a 1-1 tie.

The Phantoms took the lead again in the opening seconds of the third period when Charlie Gerard’s pass from the left boards didn’t make it through. But the block defelcted out to Sushko in the slot who was ready to put it past the glove of Dell for a 2-1 lead. Cal O’Reilly’s 511th career assist on the play moved the 35-year-old captain all alone into 9th in AHL history. 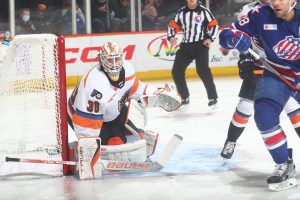 Sandin was robbed by Dell with under five minutes left and then Mersch tied the game with just 3:23 to go again going down to his knees on the backdoor, this time behind relief goalie Pat Nagle while Mersch was stationed on the left side of the crease to handle the cross-ice pass from Ethan Prow.

Rochester took its first lead of the game with 1:20 left with Sean Malone scoring on a bouncing puck in front of Nagle after Ryan MacInnis streaked up the left wing to set up his teammate on the rush. The Phantoms took their timeout and weren’t long to respond. Clendening’s dump-in from the red-line came off the stanchion directly behind Dell and bounced right out in front for Wilson who was ready to bury the bouncer past his glove to tie the game at 3-3. Wilson had hit a post on a lengthy scramble in the Rochester crease earlier in the period and also had a puck bounce over his stick when he was wide-open on the backdoor. But his third try for some puck-luck was the charm and the Phantoms had forced overtime.

Rochester was awarded a power play early in the overtime but the Phantoms penalty kill went to work, backed by relief goalie Pat Nagle, to methodically work through the 4-on-3 against the team with the top-rated man-advantage in the league.

Right after the power play had finished, O’Reilly sprinted out of the box and had an open Bunnaman trailing him but Dell’s outrageous windmill save kept Rochester alive.

Both Rochester skaters converted in the shootout. For the Phantoms, Gerry Mayhew scored off both posts and in for his second-round tally but Clendening’s shot off the post in the third round wasn’t as fortunate thus allowing Rochester to take the extra standings point.

Both games between Rochester and Lehigh Valley went to a shootout this year. Rochester won 5-4 at Blue Cross Arena on November 19. Those games are also the only shootout losses of the year for the Phantoms.

Lehigh Valley looks to extended its four-game point streak on Tuesday night when the Phantoms host the Hershey Bears at 7:05. The Phantoms and Bears will also have a rematch engagement on Wednesday back in Chocolatetown.