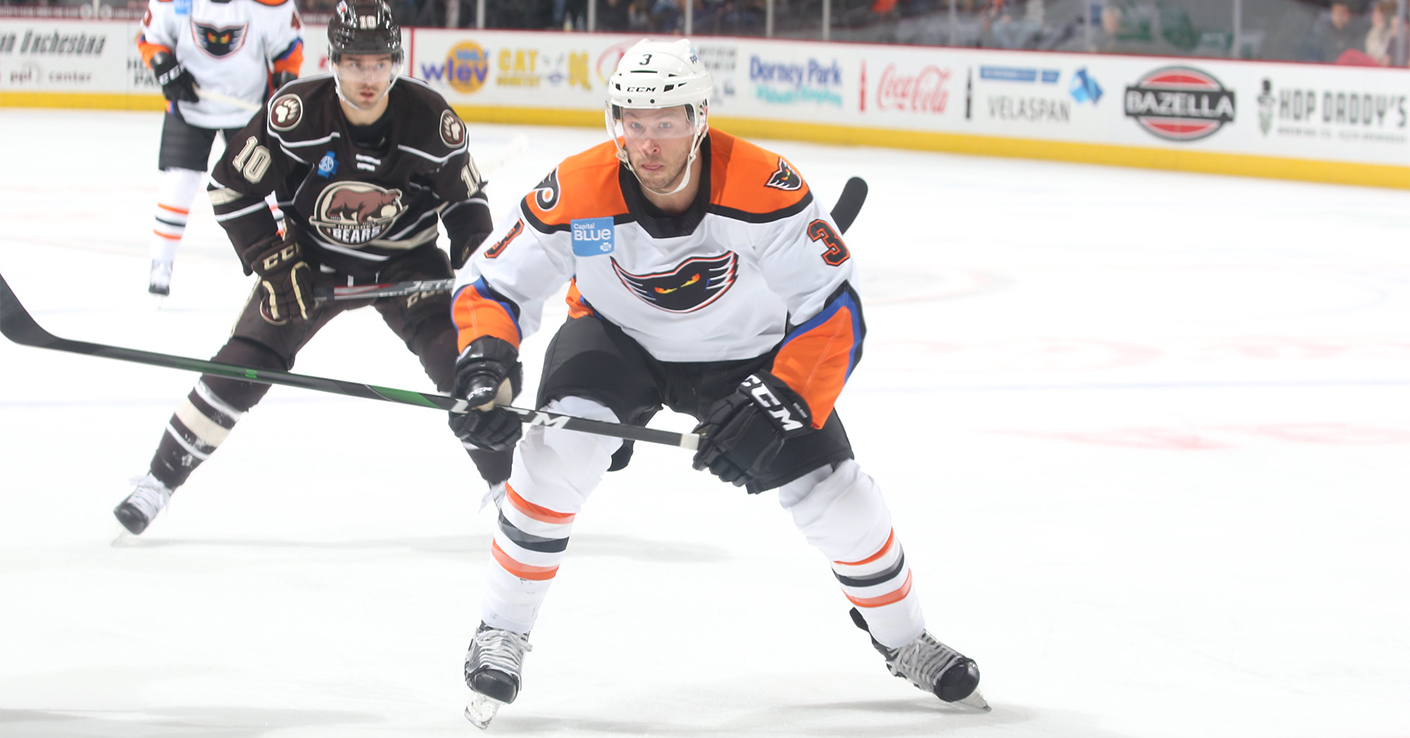 Lehigh Valley, Pa. – The Lehigh Valley Phantoms (6-2-1-3) and the Hershey Bears (6-5-2-1) battled it out into extra time on Saturday night but Lehigh Valley came away with a 3-2 overtime victory. The Phantoms entered the contest looking for revenge after losing 4-3 in overtime on October 12th and thanks to a strong performance from goalie Alex Lyon (28 saves on 30 shots), the Phantoms did just that and earned their first victory in extra time after four previous tries. The Phantoms got goals from Mikhail Vorobyev, Greg Carey, and the game-winner by Andy Welinski to help send the second-straight sell out crowd home happy. 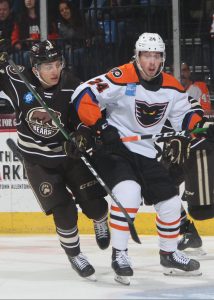 Despite being out shot early on in the first period, the Phantoms were the first team to score on Saturday night thanks to a Mikhail Vorobyev short-handed goal. Vorobyev intercepted a Hershey pass at the Phantoms blue line and raced down the ice before depositing the puck into the back of the net behind Hershey goalie Pheonix Copley. The goal was Vorobyev’s third of the season while also marking the Phantoms’ first short-handed goal of the season as well. It also served as a precursor to how the Phantoms would perform on special teams in the game as they were a perfect 5-for-5 on the penalty kill.

Phantoms goalie Alex Lyon was sharp in the first 20 minutes of action on Saturday, making 12 saves and stopping several quality chances by the Bears in the period. Thanks to Lyon and Vorobyev’s shorthanded goal, the Phantoms took a 1-0 lead into the first intermission.

In the second period, the Bears evened the score at the 3:50 mark of the period when forward Matt Moulson beat Lyon with a backhand to tie the game at 1-1. A few minutes later, the Bears took a 2-1 lead when a Liam O’Brien wrist shot ricocheted off the glass before taking a fluke bounce off the back of Lyon’s helmet and trickled into the net.

The Phantoms were able to tie the game thanks to a perfectly drawn up play from the Phantoms coaching staff who took a timeout immediately before the ensuing faceoff. With some tic-tac-toe passing, Morgan Frost found Mikhail Voroybev, who then found Carey in front of Copley and with an easy tap in made it 2-2. 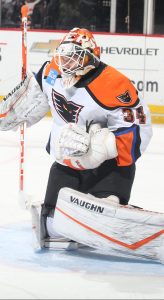 After an evenly matched first 40 minutes, the Phantoms and Bears entered the third period looking for a game-winning goal. The Phantoms would come out aggressive in the period, getting their fair share of shots on goal while keeping the Bears shotless for the first 15 minutes of the period. By the end of the period, the Phantoms had a 10-4 advantage in shots but were unable to find a game-winner, sending this one to overtime.

In overtime, the Phantoms and Bears exchanged scoring opportunities but it was the Phantoms who ended the game when Morgan Frost found a driving Andy Welinski in between the faceoff circles. Welinski took the perfect pass from Frost and rocketed it past Copley to win the game by a final of 3-2.

Next Time Out: The Phantoms will begin a four-game road trip on Sunday afternoon when they rematch the Hershey Bears. They’ll make stops in Springfield, Binghamton, and Wilkes-Barre/Scranton before returning home on November 20th for a matchup against the Charlotte Checkers to begin a three-game homestand. Fans can still buy tickets for that game and all three games as part of Retro week on November 20 22, and 23, HERE.