Lehigh Valley, PA – The Philadelphia Flyers, parent club of the Lehigh Valley Phantoms, have reassigned forward Andrew Johnston from the Reading Royals of the ECHL to Lehigh Valley. The transaction follows the announcement that Phantoms forward Jay Rosehill will be suspended for the next three games as a result of his actions in Sunday’s 3-1 setback to the Manchester Monarchs. 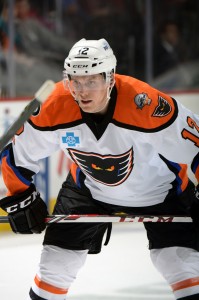 A 23-year-old winger from Saskatoon, Saskatchewan, Johnston has recorded six goals, 14 assists, 20 points and 42 penalty minutes in 42 games with the Royals this season. This will be his second stint with the Phantoms this season after the 6’1″, 180-pound forward appeared in eight games with Lehigh Valley from October 24th to November 8th. In all, Johnston has played in 44 games with the Phantoms over the last three seasons having compiled two goals, three assists, five points and nine penalty minutes during that time.

The Phantoms return to action this Wednesday, April 1st when they kick off a three-game road swing with a visit to the Norfolk Scope for a showdown with the Admirals. Lehigh Valley is then in Binghamton on Friday, April 3rd for its regular season finale with the Senators before traveling to Wilkes-Barre/Scranton for a collision with the Penguins on Saturday, April 4th. Be sure to catch all the road action this week on Fox 1470 AM, online at fox1470.com or via the iHeartRadio app. Coverage begins with the Nazareth Pallet Countdown to Faceoff 45 minutes before puck drop.