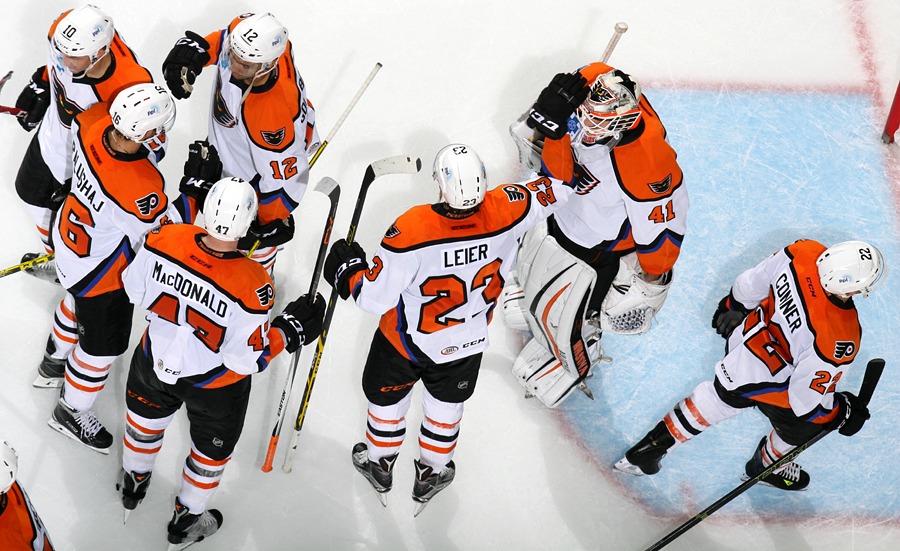 There were certainly some tremendous individual performances, including Nick Cousins (2 goals), Taylor Leier (goal, 2 assists) and Anthony Stolarz (17 saves on 18 shots) but it was the complete team effort exerted by the Lehigh Valley Phantoms Wednesday evening that helped secure a convincing 5-1 victory over the St. John’s IceCaps in front of 6,929 fans at PPL Center. 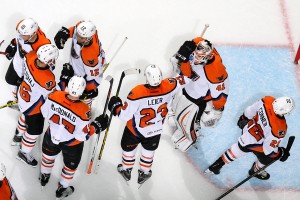 With the win, Lehigh Valley improved to 3-4 overall this season and is now 2-2 inside PPL Center this year. The Phantoms are now 2-1 on their current home stand, which concludes Friday in a rematch with St. John’s.

In addition to Cousins and Leier, Kevin Goumas and Shayne Gostisbehere also found the back of the net for Lehigh Valley. For Goumas, it was his first goal of the season while the conversion for Gostisbehere was his first professional marker. The five goals scored by the Phantoms on Wednesday is the most scored by the team through the first seven games of the 2015-2016 campaing.

But it wasn’t just an offensive showcase for Lehigh Valley.

The Phantoms turned in one of their better defensive performances of the year too as they limited the IceCaps to just 18 total shots, including just three bids on goal in the opening frame. And those that did make their way to the Lehigh Valley had little chance against Stolarz who allowed just one goal against for the third time in four starts this season. With the win, the second-year netminder improved to 3-1 on the season and has now turned aside 81 of the 87 shots he’s faced this year.

The Phantoms came out of the gates running on all cylinders as a relentless forecheck helped produce 13 of the game’s first 14 shots. In a twist of cruel misfortune, it was visiting St. John’s that actually landed the game’s first conversion despite Lehigh Valley’s early dominance.

While on the power play, Sven Andrighetto unleashed a scorching one timer from the top of the right circle that sizzled into the upper right-hand corner of the Phantoms goal. Mark Barberio and Bud Holloway assisted on the man-advantage marker netted 13:59 into the contest. 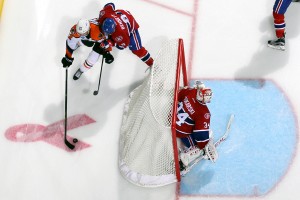 The Phantoms kept their foot on the accelerator though and leveled the tilt less than a minute later when a beautiful cross-crease pass by Gostisbehere connected with a streaking Cousins on the left wing who made no mistake in tapping in his second goal of the season. Andrew MacDonald garnered the secondary assist on the even-strength strike notched 14:54 into the first period.

Even though the score was even at a goal apiece through the game’s opening 20 minutes, it was a frame completely controlled by Lehigh Valley as the Phantoms matched a season-high for shots in a single period en route to outshooting the IceCaps 14-3 in the opening session.

Lehigh Valley grabbed its first lead of the night less than four minutes into the second period when Cousins stopped atop the right wing circle before unleashing a blistering snap shot that screamed over Tokarski’s glove into the back of the St. John’s net. Mark Alt collected the only assist on the five-on-five tally netted 3:51 into the middle frame. The conversion marked the first multi-goal effort for the Phantoms this season and the third multi-point game this year for Cousins after the native of Belleville, Ontario accounted for three multi-goal games and 16 multi-point efforts a year ago.

The Phantoms doubled their lead just over seven minutes later when a cross-ice pass from Leier connected with Goumas who promptly snapped home his first goal of the season. Palushaj, whose drive to the IceCaps goal opened up the shooting lane for Goumas, grabbed the second assist on the even-strength strike garnered 10:57 into the middle stanza. 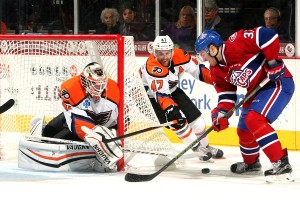 Lehigh Valley then matched its season high for most goals in a single period when it capped off a three-goal outburst with Gostisbehere’s first professional marker. With Jacob de la Rose in the penalty box for cross-checking, Brent softly dished a puck to the high slot that was promptly blasted by Gostisbehere through traffic and into the back of the IceCaps cage. Leier picked up the second assist on the man-advantage marker scored 17:25 into the second frame.

The Phantoms landed the game’s final strike just past the midway point of the third period when a beautiful pass from below the goal line found Leier at the side of the net who made no mistake in driving in his third goal of the season and second in as many games. Brent and Palushaj assisted on the five-on-five tally netted 10:48 into the third period.

The Phantoms wrap up their four-game home stand this Friday, October 30 in a rematch with St. John’s. It’s Ball Cap Giveaway and John Walson, Jr. Night presented by Service Electric Cable TV & Communications. The first 8,500 fans in attendance that evening will receive a FREE Phantoms ball cap. Puck drop is scheduled for 7:05 p.m.

Tickets for Friday’s game, along with each of the Phantoms’ 34 remaining home games, are available at pplcenter.com, by calling (610) 347-TIXX (8499) or in person at the Mealey’s Furniture Box Office at PPL Center (701 Hamilton).