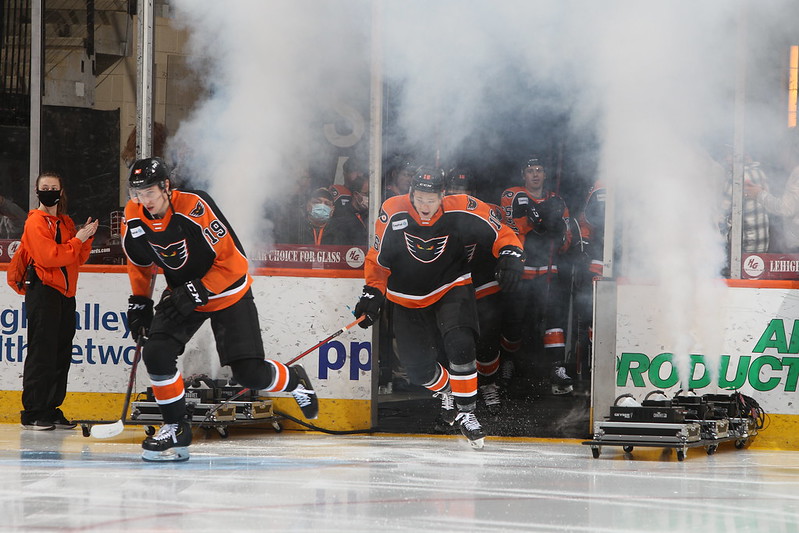 Lehigh Valley, PA – Matt Strome (4th, 5th) recorded his first  career multi-goal game but the Phantoms fell to the visiting Charlotte Checkers 5-2 on Friday night at PPL Center. Isaac Ratcliffe racked up a pair of assists in his first game back while the Phantoms just missed out on their multiple opportunites to climb back into contention. A Connor Bunnaman shot off the post early in the second period would have evened the score at 2-2. And Charlie Gerard’s goal with 12:30 remaining in the third that could have made it a 4-3 contest was taken off the board on a goaltender’s interference call.

Lehigh Valley (18-22-10) struck first just over two minutes in with Isaac Ratcliffe patiently surveying behind the net before connecting directly in front for Strome to hammer home his first of the night and fourth of the season. Connor Bunaman also assisted on the goal to give Lehigh Valley the 1-0 lead. 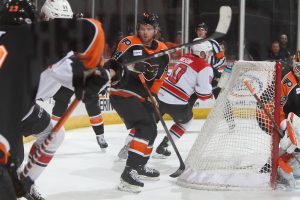 Charlotte responded with two goals of their own in the first period. The first came off a shot near the blue line from Matt Kirested that was tipped in by Logan Hutsko (11th). The second came on a power-play blast by Zac Dalpe (21st) from the right slot.

Charlotte scored two more in the second period while outshooting the Phantoms 10-4. Hunter Bowlbycut in from the right boards and took it straight to the slot to score a key goal just moments after Bunnaman’s blast off the crossbar from the left circle that would have evened the score. Later, Chase Priskie  sped into the zone and blasted a shot off the right post past the glove of Felix Sandstrom with 12:05 to play in the middle frame to push the Checkers ahead 4-1.

Matt Strome’s second goal came off the deflection of a point-shot by Cam York, surging the momentum in the Phantoms’ direction heading to the second intermission with Lehigh Valley having closed the margin to 4-2.

In the third period, Charlie Gerard had a goal taken away due to goalie interference with Cal O’Reilly getting tangled with the Checkers’ keeper Spencer Knight. Egor Zamula’s backdoor feed for Gerard appeared to have cut the game to one before the Phantoms realized the goal was being erased. The Phantoms fired off eight shots at Knight in the final period, with Knight making the saves on all eight.

The Phantoms pulled Felix Sandstrom for a 6-5 man advantage in the final minutes and eventually Cole Schwindt chased the puck down the ice and scored on the empty net to seal the victory.

Felix Sandstrom made 27 saves on 31 shots in his return to the ice after sustaining an injury on February 19 against Utica.

The Phantoms wrap-up their 25th anniversary weekend with Saturday Night Hockey Live in a rematch against the Checkers at 7:05.
SCORING SUMMARY