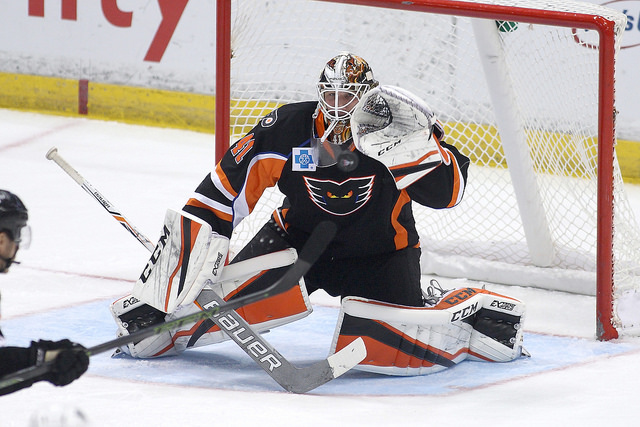 Hartford, CT – Anthony Stolarz perhaps never thought of himself as a morning person before. But he may want to revise that idea based on his stellar 33-save shutout performance in a 4-0 Phantoms victory at Hartford in a rare Wednesday morning game.

T.J. Brennan led the way with one goal and two assists while Cole Bardreau (1st), Corban Knight (2nd) and Mark Zengerle (3rd) also found the back of the net in Lehigh Valley’s second straight win in as many Hartford appearances. Zengerle added an assist to go with his goal for a 2-point performance while Reece Willcox finished with a +3 rating for the day. 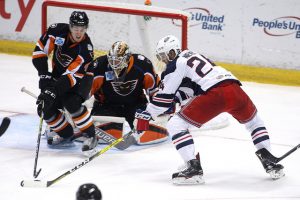 The 11:00 a.m. contest was part of a special School Day event for the Hartford Wolf Pack. But the thousands of screaming kids enjoying the festivities were denied the opportunity to cheer for a goal from the home team due to “Stolie the Goalie’s” third career shutout.

The last shutout for Stolarz was two seasons ago on December 19, 2014 in a 36-save performance against the Hershey Bears as part of a 2-0 win. That game was a 1-0 nailbiter until an empty-netter with less than one second to go officially clinched it. This one at Hartford wasn’t quite as close.

T.J. Brennan opened the scoring at 11:15 into the first period thanks to some hard work by Taylor Leier and Jordan Weal. Leier hustled to work the puck free and then Weal from the left boards fired a perfect bullet to Brennan who spotted an opening in the slot. Brennan had plenty of time to choose his corner to bury his third of the season.

Right after the Brennan goal, the Wolf Pack raced at Stolarz with a 3-on-1 but Nicklas Jensen on the backdoor would be denied off the glove of the diving Stolarz who turned in perhaps his best save of the day. 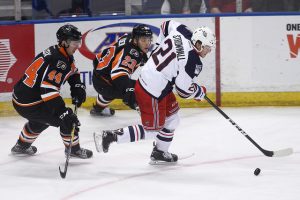 Nic Aube-Kubel would knock a puck free to an open Mark Zengerle who was denied on his mini-breakaway off the pads of Magnus Hellburg. But Cole Bardreau scooped up the long rebound falling away and was able to snipe his first of the season to the vacated upper portion of the net over the sprawled Hartford netminder.

The Phantoms emerged from a dominating first-period performance with a 2-0 lead. Lehigh Valley had out shot the Wolf Pack 14-7 in the opening 20 minutes.

Hartford’s best efforts to trim that margin came throughout a 16-shot barrage in the middle frame that tested Stolarz and the Phantoms defense. Eventually, the Phantoms were able to escape to the locker-room with the 2-0 advantage still intact thanks to 16 more denials from Stolarz.

The Phantoms began to put away the game in the early minutes of the third. Corban Knight reached across from the left circle to deflect a Brennan drive from the point that would re-direct across past the far shoulder of Hellburg for a 3-0 lead. The Wolf Pack contended that the puck was possibly tipped by a high-stick from Knight but the goal was good and Hartford suddenly found themselves behind by three.

T. J. Brennan offered another left-point bomb later in the third period. This time it would be Mark Zengerle on the top of the crease with the tip-in with 5:05 remaining for the fourth strike of the day. 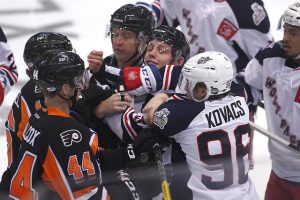 With the verdict having already been decided the only drama remaining was whether the goose-egg would stand on the home side of the scoreboard. Ryan Graves offered a quality chance from the left of the cage with about 40 seconds left for the final serious challenge to Stolarz blank sheet but the lanky backstop would come through with his 33rd stop of the day to preserve the impressive win.

The shutout was the sixth ever for Lehigh Valley and is the 89th all-time recorded for the Phantoms franchise. Stolarz moves into eighth place all-time (tied with Martin Houle) with three Phantoms shutouts. The all-time franchise record is held by Neil Little who had 18 blank-sheets in a Phantoms sweater.

Hartford out shot the Phantoms 33-30. Lehigh Valley was 0-for-3 on the power play while Hartford finished at 0-for-2. The Phantoms evened their overall record at 3-3-1 while the Pack fell to 3-5.

The Phantoms are 2-1 against Hartford this season with both of their victories coming in Connecticut. The two teams will rematch on Saturday, November 28 at PPL Center in the fourth of eight regular-season encounters.