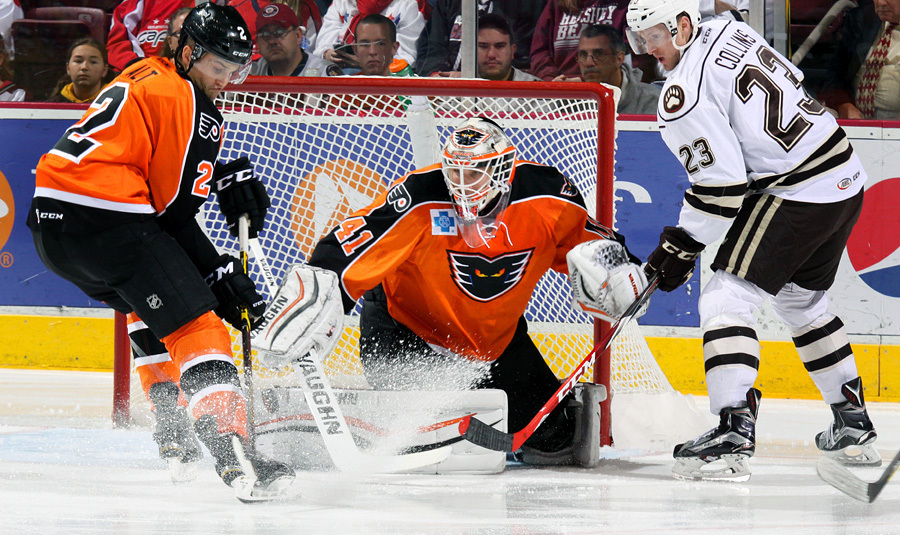 Hershey, PA – It was the kind of spectacular performance that garnered massive respect and props from the opposing team’s fans. Anthony Stolarz narrowly missed lifting the Phantoms to a win at Hershey in a crazy 42-save performance but the host Bears rallied late on Saturday night and Chris Bourque’s goal with 20.4 seconds remaining ended the magic and propelled Hershey to the decision.

The Phantoms were out shot in the game 44-15 and had difficulty getting the pressure away from their zone but Anthony Stolarz was making one save after another in single-handedly preserving a 1-0 lead from the first period. In a week in which Stolarz was the team’s best player in wins on Wednesday and Friday, it was in the team’s Saturday loss that he perhaps shined the most with even more jaw-dropping saves to culminate his three-game stretch.

Bourque’s chip-in for the winner from right on top of the crease was almost stopped by “Stolie” as well. Lunging across to his left with his leg and glove, the second-year goalie from Jackson, New Jersey was incredibly close to preserving the tie with yet another ludicrous denial. After the puck found the back of the net, Stolarz laying on the ice took longer than normal to rise to his feet again perhaps to the emotional drain of the change of circumstance.

“At the end of the day we got what we deserved,” Phantoms head coach Scott Gordon said. “We didn’t deserve to win the game. Stolie almost stole it for us.”

Nick Cousins scored in his first game back with Lehigh Valley following his four-game call-up to Philadelphia. His sixth goal was good for his team-leading 19th point of the season.

After being out shot 10-0 to begin the game and 13-1 after almost 15 minutes, the Phantoms emerged from their zone on the other end of yet another Stolarz save. Nick Cousins carried up the right wing with a 3-on-2. Cousins dropped to the trailing Samuel Morin whose big blast bounded off the pads of Dan Ellis setting up a rebound try for Cousins scooping up the opportunity and potting the game’s debut tally falling away from the right side of the slot.

The Phantoms were afforded five power plays in the opening 30 minutes of the game but produced very few shots that made it through to Dan Ellis and thus missed out on some quality opportunities to establish a larger lead on the road.

“They controlled the whole game,” Nick Cousins said. “If it wasn’t for Stolie it would have been 6 or 7 to 1. We can’t play like that. Obviously it’s not good enough. I’ve got to be better. I wasn’t good enough either.”

After being out shot 27-10 in the first two period, the Bears turned up the heat even more to open the third and kept on top of the Phantoms and them hemmed in for long stretches. When the Phantoms did clear, it was frequently right back in their zone from rapid Bears transition up the ice. Finally, Paul Carey connected with Dustin Gazley for a chip-in goal on the glove-side of Stolarz that, similar to the Bourque goal at the end, the big Phantoms netminder was almost able to secure. The goal at 10:23 into the third evened the score at 1-1.

Along the way was one scintillating stop after another for Stolarz in a jaw-dropping performance that frustrated the Hershey Bears players and amazed the Giant Center crowd. Carter Camper alone was snake bit on seven different shot attempts including a breakaway denial in the second period with Stolarz stretching across his right leg and successfully reaching his blocker to the backhand attempt lifted into the air by Camper.

When Stolarz returned to the ice after the game for his curtain call as one of the Stars of the Game, the Hershey fans in the house had no choice but to offer a larger ovation than an opposing team’s goalie would normally receive.

Phantoms captain Colin McDonald also entered the lineup along with Cousins in their mutual return to Lehigh Valley from the Philadelphia Flyers.

“The ice was tilted against us the whole game,” McDonald said. “I heard the guys played pretty well last night (in Wilkes-Barre). I’m not sure what happened. Hopefully just one of those games where, for whatever reason, we just didn’t have it tonight.”

The Bears out shot the Phantoms 44-15 in the game including 17-5 in the decisive third period. Both teams went 0-for-5 on the power play.

The game was the 200th meeting all-time between the Phantoms and Bears in a rivalry that began on October 5, 1996 at Hersheypark Arena in what was the second game ever for the Philadelphia Phantoms franchise. The contest was also the fourth out of 12 in the season series. Lehigh Valley and Hershey face each other four times in December including a Wednesday rematch at PPL Center in Allentown. The Phantoms are 2-2 against Hershey this season.