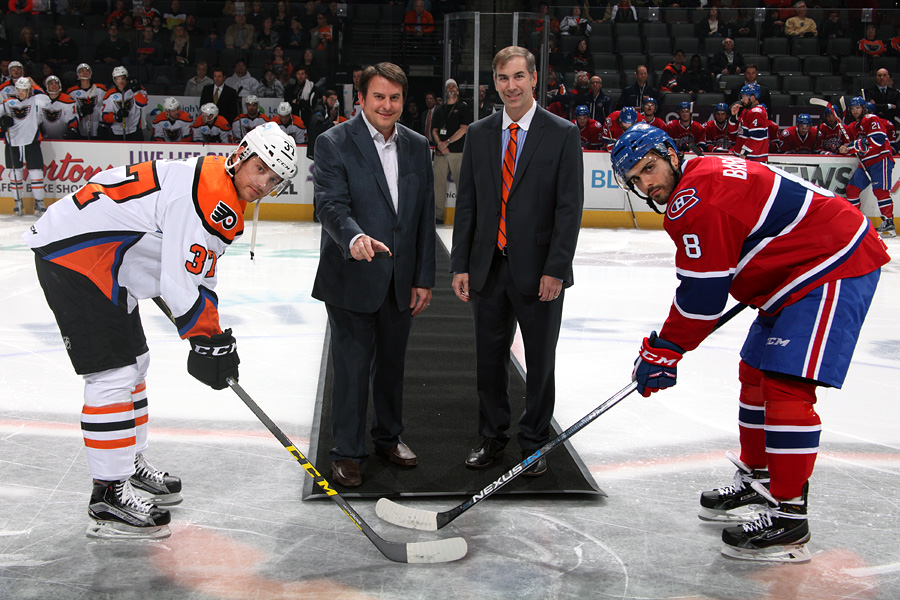 Lehigh Valley, PA – Speedy winger Chris Conner scored a pair of goals for the Lehigh Valley Phantoms to erase a two-goal deficit but the St. John’s IceCaps converted midway through the third period for the go-ahead tally in a 3-2 decision at PPL Center on Friday night.

Michael McCarron somehow got a backhand on a knee-high rebound from the pads of goalie Anthony Stolarz to score his fifth of the season on what proved to be the game-winner.

The victory from an overly inspired St. John’s squad avenged a Wednesday night thrashing at the hands of the Phantoms who had their way in a 5-1 series opener triumph. The game was also the finale of a four-game homestand for the Phantoms who finished 2-2-0 in their week-long stretch.

The Friday night rematch was a battle of two top young goaltending prospects both of whom were selected in the second round. 20-year-old rookie and Montreal prospect Zach Fucale took the crease for St. John’s while 21-year-old and second-year pro Anthony Stolarz made his fourth consecutive start for the Phantoms.

The evening began with a Ball Cap giveaway for all hands in attendance courtesy of our friends at Service Electric. The Press Level of PPL Center was dedicated to the memory of John Walson, Jr. in a pregame ceremony. 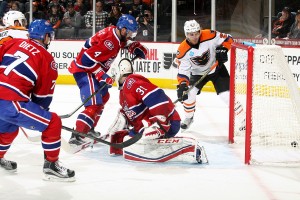 The Phantoms were afforded some key power-play opportunities throughout the second period and were able to convert on one out of four. Phantoms head coach Scott Gordon said there was some good to take away from their power-play efforts along with some aspects to be improved.

“We had in-zone time,” Gordon said. “We had the puck on our stick with an opportunity and probably lost it three times with no pressure. Am I happy with the results? No, but I’m happy we had it in the zone and we had movement and chances. Had we not lost those pucks in those situations we would have had three more chances.”

Danick Martel returned to game-action for the first time since suffering a lower-body injury on October 16 at Springfield and helped generate several quality scoring chances. In the first period, his quick release from the corner right onto the stick of Evan Rankin in the low slot led to some highway robbery in the form of a spectacular glove save by 20-year-old St. John’s goalie Zach Fucale.

Sven Andrighetto opened the scoring for the second game in a row with his conversion on the backdoor of a fortuitous end-boards rebound in the opening seconds of the second period. Bud Holloway’s drive from the left point caromed behind Stolarz and somehow went perfectly onto the stick of Andrighetto on the right of the cage.

A few minutes later, St. John’s extended their lead to 2-0 with a power-play strike courtesy of second-year pro Charles Hudon who received a nice drop on the right of the cage after Holloway carried it in deep. 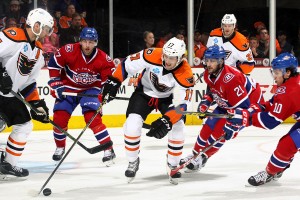 Lehigh Valley responded just over two minutes later when Chris Conner found an opening up the right-wing. With play still at 5-on-3 due to a pair of St. John’s infractions, Conner turned the corner on a defenseman struggling to keep pace with the rapid skater. Conner then went wide around the goalie Fucale somehow avoiding his poke-check attempt to bury his first of the night. The goal came just one second after a two-man advantage had ended. The Phantoms were thus denied by a mere one second the possibility to continue with an additional 1:25 power play.

Shortly after Conner’s goal, a pair of heavyweights agreed to square off and Lehigh Valley’s Derek Mathers won another quick bout against a St. John’s tough guy. This time Mathers landed three rapid-fire jabs on notorious enforcer Eric Neilson for the decision which again raised the roof for the excited contingent gathered at the corner of Seventh and Hamilton.

Conner’s equalizing goal would come at 5:55 of the third period after Nick Cousins would again get rocked. This time it was Dalton Thrower of St. John’s who blasted Cousins way back at the Phantoms line just after the third-year centerman had released the puck up the left-wing to Danick Martel sparking a 2-on-1. Cousins was still struggling to gain his footing while Martel up the left-wing did a quick stutter and fake-shot to freeze Fucale before feeding Conner perfectly across the slot who responded with his fourth goal of the season.

The 2-2 tie would last less than three minutes however. Christian Thomas offered a long drive from the right-wing in a quickly developing 3-on-2. Stolarz shoved the puck out to the left side in mid-air but somehow McCarron was able to smack the knee-high tumbler into the net with a backhand swat for his fifth of the year. The Phantoms argued with the officiating that the play may have been offsides but were unable to win the argument.

The hitting and viciousness in the game got going early and both sides delivered some big hits throughout the night. Nick Cousins, who seemed to have a target on his back, was blasted four or five different times in the game and eventually was unable to finish the contest. Forward Evan Rankin was struck in the side of the neck by a hard slapshot by Shayne Gostisbehere and similarly did not return for the rest of the third period. 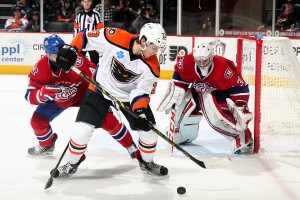 With a short bench in yet another game, the Phantoms were only able to offer a couple more chances at Fucale for the rest of the evening as St. John’s was able to hang on for the series evening win at PPL Center.

Scott Gordon did not offer an update on the status of Nick Cousins and Evan Rankin who were unable to finish the game. The Phantoms have perhaps been bitten by the injury bug more than any other team. Danick Martel is the first to return of five players who all went down in the first two weeks of the season while Robert Hagg, Colin McDonald (captain), Cole Bardreau and Michael Parks all continue to heal from their various ailments.

“We’ve certainly had our share of injuries but we’re at least getting some bodies back soon so that’ll help,” Gordon said.

These were the only Allentown appearances of the season for the “Baby Habs.” Lehigh Valley will return the favor in early April with a two-game series in Newfoundland and Labradour.

The Phantoms take to the road Sunday evening with a 5:05 p.m. tilt at the Hershey Bears in the first of 12 meetings between the Keystone State rivals. It is also the 197th all-time meeting between the Phantoms and Bears in 20 seasons of the rivalry. Sunday’s game can be heard with the Voice of the Phantoms, Bob Rotruck, on 790-AM and 790WAEB.com. Please make a note of the switch in radio stations for this Sunday broadcast. 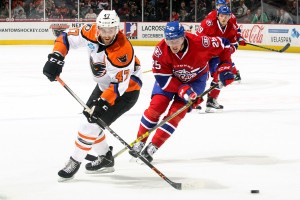 Lehigh Valley returns home on Friday, November 6th facing the Hershey Bears at 7:05 p.m. celebrating the 20th Anniversary Season of the Phantoms Franchise with the first of four poster giveaways. The Phantoms are also at home on Sunday, November 8th at 5:05 p.m. taking on the Binghamton Senators featuring a “Go Birds” Tailgate with the Eagles Cheerleaders on hand.