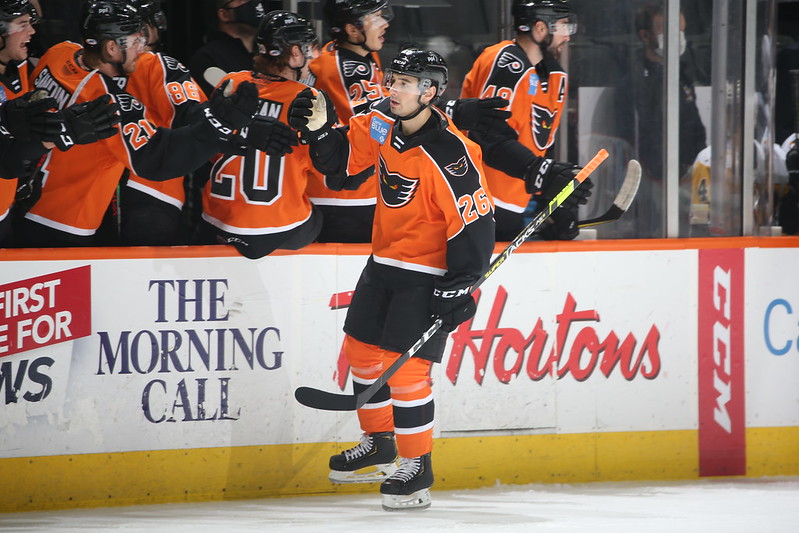 Lehigh Valley, PA – Brennan Saulnier made the most of his opportunity back in the lineup with a natural hat trick (three consecutive goals) in the first ten minutes of the game and the Lehigh Valley Phantoms breezed from there to a 6-2 Mothers’ Day win over the Wilkes-Barre/Scranton Penguins on Sunday afternoon at PPL Center.

Chris Mueller celebrated his milestone 800th AHL game with a pair of goals and Tanner MacMaster chipped in a goal and an assist. Zayde Wisdom had three strong assists in the game and had a +4 rating as he skated with the so-called fourth-liners who played like anything but fourth-line forwards in this game. 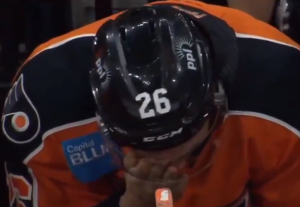 Saulnier’s hat trick was the 14th in Lehigh Valley history and the second this season (Tanner Laczynski, March 26 at Binghamton Devils). It was the first Phantoms’ hat trick at PPL Center in over three seasons since Danick Martel scored a trifecta on Opening Night, October 7, 2017 in a 7-2 win over the Hershey Bears.

He added to his legendary night at PPL Center with a fight against Wilkes-Barre/Scranton’s Jordy Bellerive who had dealt a hard check to Zayde Wisdom with 49.7 seconds to go in the game. Saulnier connected on a number of blows and celebrated his accomplishments raising his hands to the crowd on his way off.

For the 35-year-old Mueller, his 245th and 246h career goals are the most of any active player in the American Hockey League.

Saulnier entered the day with just one career AHL goal in 11 games played and had been out of the lineup more than he had been in it this season. But he thrived on his opportunity with this line combo. Early in the game, defenseman Linus Hogberg found an opportunity to carry the puck in deep from the right point and rotated around to the left corner. After drawing a couple of defenders to him for a puck battle, he connected with Zayde Wisdom who found Saulnier on the left dot slamming home his first of the game at 2:03 into the contest.

His second goal was a redirect between his skates on a right-point slapper from Wyatte Wylie. Saulnier craftily jumped out of the way of the shot while reaching down to get a piece of the puck which he deflected off the post and past Penguins’ goalie Tommy Nappier for a 2-0 advantage at 5:28 into the game.

The Halifax, Nova Scotia native made it 3-0 when he rotated up high after Derrick Pouliot had worked it in deeper. Saulnier’s seeing-eye shot made it through a host of bodies and traffic in front for a 3-0 lead at 9:55 into the contest to bring some hats flying down onto the ice at PPL Center for the first time in three-and-a-half years. 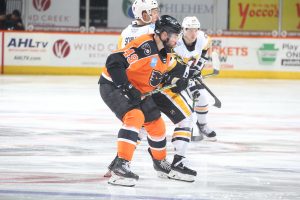 Felix Robert connected for the Penguins late in the period on the backdoor on a cross-ice feed from Jonathan Gruden to get the visitors on the board before the first break.

Tanner MacMaster scored on a feed from Zayde Wisdom early in the second period for a 4-1 lead. Wisdom’s initial pass attempt was poked away off the paddle of the Penguins’ goalie but it came right back to Wisdom who tried again for his second assist of the game and MacMaster’s second goal of the season and fourth of the night for the Wisdom-MacMaster-Saulnier line.

Chris Mueller found a loose puck on the left of the crease during a power-play scramble to cash in for a 5-1 lead at 4:38 into the second period.

Mueller scored again just over three minutes into the third, again on the power play, taking a tip forward along the left boards by Wisdom and rushing past the Penguins D and curling around the goalie, Nappier, for the team’s final tally of the night.

Josh Currie scored a few minutes later on the power play on a scramble in the crease with the ref signalling that he saw the puck go in past the sprawled bodies of Zane McIntyre and Max Willman efforting to keep it out.

The six goals equals the most this season for the Phantoms and the four-goal margin is their largest win of the season. Lehigh Valley is 4-2-1 against the Penguins this year.

Just three games remain in the regular season including Wednesday night at Prudential Center in Newark where the Phantoms will tangle with the Binghamton Devils.

The Phantoms conclude the 2021 campaign on Saturday night and Sunday afternoon with a pair of home games at PPL Center against the Wilkes-Barre/Scranton Penguins and Binghamton Devils.

Tickets for the remaining Phantoms’ home games next week are available at phantomshockey.com