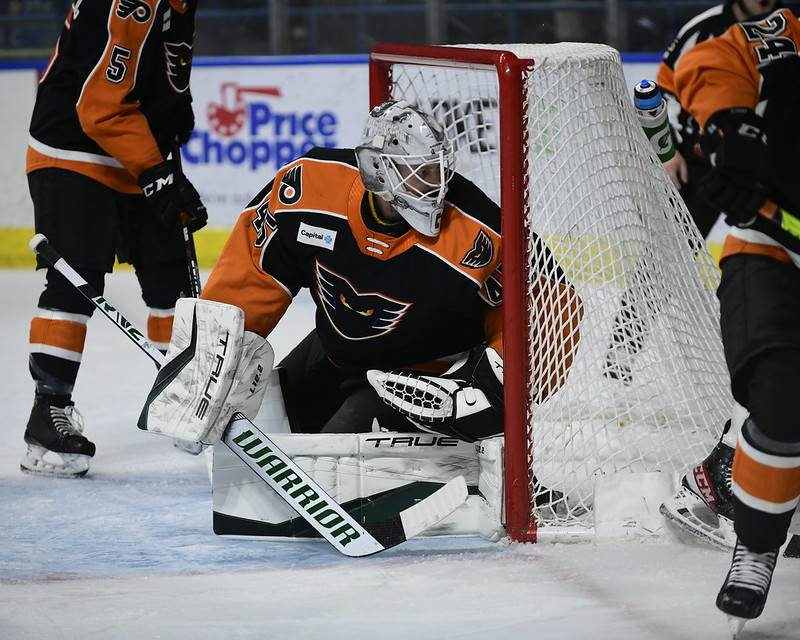 Wilkes-Barre Twp, PA – Garrett Metcalf turned in a phenomenal performance with 39 saves to improve to 2-0-0 since joining the Phantoms as Lehigh Valley found a way to extend their record point streak to nine games with a 4-3 victory at the Wilkes-Bare/Scranton Penguins on Friday night. 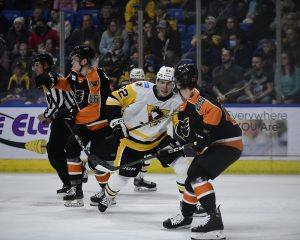 Linus Sandin scored two goals while Cal O’Reilly and Adam Clendening both registered three-point games with one goal and two assists apiece. Lehigh Valley is 7-0-2 in its last nine games for the longest point streak in team history since the Phantoms arrived to Allentown in 2014. It is the longest point-streak for the Phantoms franchise in over 17 years dating back to the then-AHL record 17-game win streak of the Philadelphia Phantoms in October and November of 2004.

Lehigh Valley’s first game in nine days saw the team shaking off some amount of rust as they were outshot 32-11 through the first 40 minutes but the Phantoms’ newest goalie, and sixth goalie of the season for Lehigh Valley, Garrett Metcalf, kept the game tied at 1-1 while the Phantoms in front of him continued to compete and block.

Felix Robert scored just over three minutes into the contest on the Penguins’ fourth shot of the game. After that came 32 consecutive saves from Metcalf in a streak that extended into the third period.

Sandin’s first goal of the night came on the power play in the first period on a one-timer in the slot set up by Cal O’Reilly’s 514th career assist in the AHL. Adam Clendening provided the secondary assist from center-point rotating the puck over to O’Reilly on the right boards.

Metcalf and the Phantoms somehow hung on to keep the game tied at 1-1 through the second period.

Early in the third came a Phantoms turnover in the corner that led to a Kyle Olson shot in front that was denied off the left pad of Metcalf for one of his best stops of the night. Shortly thereafter, Sandin raced up the right boards and sniped to the upper-near corner on the stick side of the lefty-style goalie Alex D’Orio for a 2-1 lead.

A few minutes later came a Linus Hogberg shot/pass from the left point that O’Reilly perfectly placed upstairs for a stunning 3-1 advantage for the Phantoms. 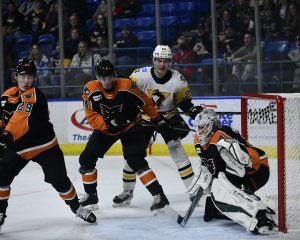 Valterri Puustinen struck on a net-front scramble over a sprawled Metcalf with under four minutes remaining to pull the Penguins to within a goal again at 3-2.

With the goalie pulled, Adam Clendening looked to clear the puck down ice but his carom off the penalty-box side nudged the puck onto its edge to then roll all the way down and perfectly into the empty-net for a 4-2 lead.

Alex Nylander scored his first goal as a Penguin with just 6.5 seconds left but Wilkes-Barre/Scranton was not able to threaten in the closing seconds for the equalizer.

Wade Allison played in his first game in almost a month since sustaining an elbow injury on December 17 at Utica. It was Allison’s fourth game of the season. Newcomer Alex Kile made his Phantoms debut since joining the team from the Maine Mariners on an AHL contract. Felix Sandstrom dressed as the backup goalie while Pat Nagle was unavailable due to AHL COVID-19 protocols.

Lehigh Valley has not lost in regulation since December 3. The Phantoms have also had some postponed games in the midst of their record nine-game point streak.

The Phantoms improved to 2-2-1 against the Penguins this season. The two teams will rematch on Saturday night at PPL Center.

The Phantoms return to PPL Center for a weekend homestand on Saturday, January 15 against the Wilkes-Barre/Scranton Penguins and Sunday, January 16 against the Toronto Marlies.
Saturday is United Way Night presented by Air Products. Fans are encouraged to bring boxed pasta donations for a chance to win big prizes such as a game worn Phantoms jersey.
Sunday is Youth Jersey Day for the first 1,000 kids age 14 and younger presented by Service Electric and Velaspan.