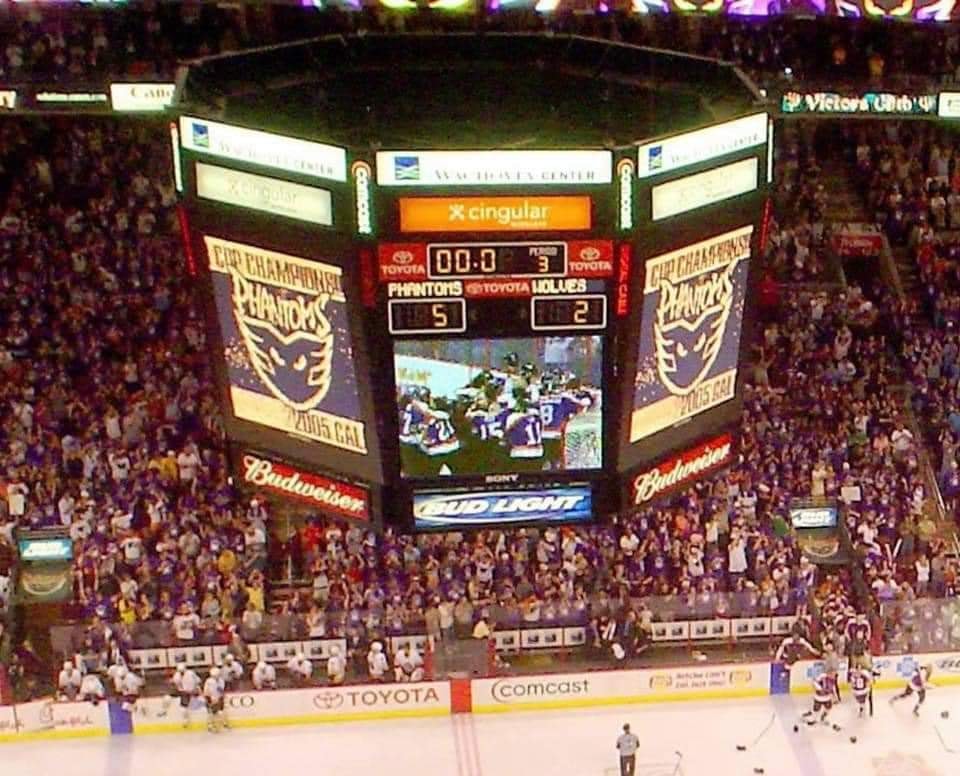 This was my view from the TV broadcast booth at the then Wachovia Center as the scoreboard clock hit “00.0” sixteen years ago today on that sultry late Spring evening of June 10, 2005 as the AHL Philadelphia Phantoms and a Calder Cup record crowd of 20,103 fans began to celebrate Philadelphia’s second Calder Cup championship by sweeping the Chicago Wolves in four games in the finals . I didn’t leave the party in the Lexus Club afterwards until about 4 am, and despite there being no Flyers hockey in 2004-05 because of the lockout, the Phantoms and AHL gave Philadelphia plenty of great hockey to appreciate.
While the Phantoms were already a very solid contender entering the 2005 play-off run, the roster improved drastically with the addition of the Flyers’ two graduating 2003 first-round draft picks — the OHL Sault-Ste. Marie Greyhound’s Jeff Carter (taken 11th overall) and OHL Kitchener Ranger’s Mike Richards — who each joined the Phantoms as their junior clubs were eliminated from the Memorial Cup playoffs.

Carter arrived in time for the final week of the regular season schedule and went on to lead the AHL in playoff scoring with 23 points (12-11) in 21 games. Richards joined the club a game into the second round and went on to collect 15 points (7-8) in 14 games.

The Phantoms met the Norfolk Admirals in the first round, a team that had defeated Philadelphia in six of their ten regular-season meetings including the last game of the season played at the Spectrum on April 17th. While the Admirals put up a good fight and stretched the series to six games, Philadelphia clinched the first round set with a 4-2 victory at the Wachovia Center located across the parking lot from the Spectrum. (With the circus in the Spectrum for two weeks as the play-offs began and no conflicting Flyers’ post season dates at the Center because of the lockout, the AHL club would end up playing all 13 of its home Calder Cup games in the much larger NHL building.)

Next up were the Wilkes-Barre/Scranton Penguins who had already upset the Binghamton Senators in their first round set. After the Phantoms took the first two games at home and split games three and four in Wilkes-Barre, the series returned to the Center for one of the most memorable games in team history. Trailing 4-1 almost midway through the third period of game five, the Phantoms exploded for six unanswered goals over the game’s final ten minutes en route to a 7-4 victory and a berth in the Eastern Conference Finals against the Providence Bruins whom the Phantoms dispatched as well in six games with another victory at the Center which also extended their post season home ice record to a perfect 11-0.

With the victory over Providence the Phantoms were back to the Calder Cup Finals for the first time since 1998 where they would meet the Chicago Wolves, another powerhouse team that up until that point had breezed through the playoffs including a sweep of the Manitoba Moose in the Western Conference Finals. While both teams had plenty of scoring power, it was expected to be a battle of two stellar Finnish-born goaltenders — the Phantoms’ Antero Niittymaki and the Chicago’s Kari Lehtonen — who had both been stellar performers all season long. Even though the Phantoms had finished the regular season with 103 points on a record of 48-25-3-4, for the first time in the 2005 post season the Phantoms would have to open a series on the road as Chicago had finished with 105 points (49-24-5-2) and had lost just seven times at home all season.

As expected, the first three games of the series were tight checking, low scoring contests which featured stellar goaltending at both ends of the ice. Niittymaki, however, who was just a little bit better than Lehtonen, his fellow Finn, earning a surprise 1-0 shutout victory in game one. He was even better in game two, however, holding the high scoring Wolves to just one goal in a 2-1 double overtime victory to send the series back to Philadelphia where the the next three games — if necessary — would be played and Phantoms were already 11-0 in the play-offs. Niittymaki again held the Wolves to just one goal as the Phantoms defeated Chicago again, 2-1. Through almost eleven periods of hockey over three games, Niittymaki had allowed the high scoring Wolves (245 regular season goals) just two goals while Lehtonen and had been solved for just five by the Phantoms, but that differential of three goals was enough to give Philadelphia a 3-0 stranglehold on the series going into game four on June 10th.

When the puck was dropped for game four an AHL playoff-record crowd of 20,103 was in the seats wearing thousands of “Purple Reign” t-shirts and hoping to see a Philadelphia professional hockey team win a play-off title on home ice for just the fifth time in the seventy-eight years since the CAHL Arrows first played a pro hockey game in the city in 1927. And the Phantoms did not disappoint the SRO crowd as they defeated the Wolves handily, 5-2, with Ben Stafford collecting the Cup winning goal. Jeff Carter’s 23 points (12-11) earned him individual honors as the AHL’s top scorer in the play-offs and Niittymaki won the Jack Butterfield Award as the Calder Cup MVP. After the Phantoms shook hands with the Wolves’ players at center ice AHL President Dave Andrews handed the Calder Cup to team captain Boyd Kane who skated it around the ice to the cheers of more than twenty thousand lucky hockey fans. Ironically exactly seven years earlier to the day, Phantoms’ coach John Stevens had received the same Cup from the same hands a few hundred yards away at the Spectrum as captain of the 1997-98 Phantoms.

The 2004-05 Phantoms not only brought the Calder Cup back to Philadelphia for a second time, more importantly for the parent Flyers the club also sent a dozen members of its championship roster on to the NHL in 2005-06. Eight players — Antero Niittymaki, Jeff Carter, Mike Richards, Partick Sharp, John Sim, Joni Pitkanen, Dennis Seidenberg, and R.J. Umberger — all saw regular service with the Orange & Black in 2005-06 while Ben Eager, Randy Jones, Wade Skolney, and Ryan Ready also were called up at one time or another during the season.