Lehigh Valley, PA – Goalie Felix Sandström has been selected as the Phantoms’ PSECU Player of the Week. The 24-year-old from Gavle, Sweden is in his second professional season in North America and his first full season with the Phantoms.

On Sunday, May 2, Sandström was terrific in a 40-save gem allowing just one goal at the Hershey Bears. Early in the second period, the score was still 0-0 after he had stopped the first 25 shots Hershey had in the game. His 40 saves equalled a career-high initially set in his North American pro debut on April 12, 2019 at the Providence Bruins. 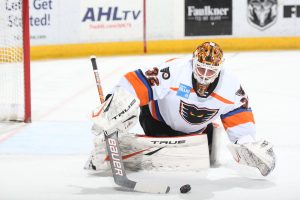 He also had a great performance last Wednesday at Wilkes-Barre/Scranton with 32 saves on 34 shots in a 2-1 overtime loss against the Penguins.

The 6’2″ goaltender was a round 3 selection of the Philadelphia Flyers in the 2015 NHL Entry Draft.