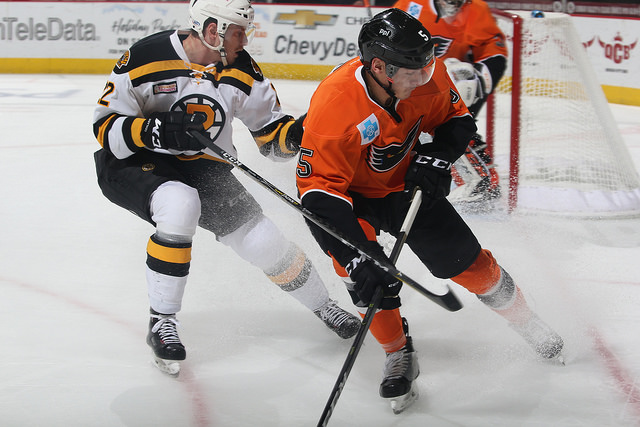 Phantoms Race Out to 2-0 Lead But Bruins Have Response

Lehigh Valley, PA – Greg Carey and Nicolas Aube-Kubel propelled the Phantoms to an early 2-0 advantage just barely over a minute into Saturday night’s game but the Providence Bruins felt the comeback inspiration for a 6-3 win at PPL Center on Saturday night. The result was somewhat reminiscent of last Friday’s game in Providence in which the Bruins initially led 3-0 before the Phantoms would rally for a 5-4 decision. 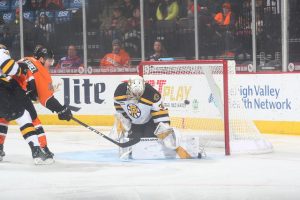 Following the game, the players joined their loyal followers in the concourse for a special postgame autograph opportunity in another fine fan-interaction activity that has become a hallmark of the team since its arrival in downtown Allentown five years ago.

Austin Fyten scored a pair of goals against his former team in the Providence victory. Fyten played with the Phantoms in Lehigh Valley’s inaugural season of 2014-15 and had two goals on that entire campaign. But in Fyten’s return he would push two past Carter Hart in just one night as did Cameron Hughes who narrowly missed on a hat trick bid in the third period when he fired squarely off the post with a couple minutes remaining.

Greg Carey (12th) picked off a Providence clearing attempt and quickly fired for the upper-right corner for his third goal of the weekend and his milestone 100th goal all-time in the American Hockey League a mere 38 seconds into the contest for the team’s fastest goal of the season. Carey was also celebrating his 300th career pro game. Another exciting milestone on the evening was T.J. Brennan’s 600th career game in the AHL. 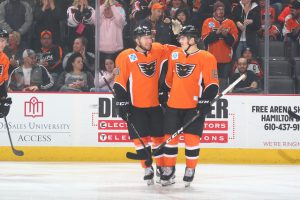 Just 29 seconds later it was Mark Friedman on a smart lead pass to spring Nicolas Aube-Kubel (4th) on a sort-of-breakaway who put on a nifty backhand-to-forehand move to flip the puck over the left pad of Bruins goalie Dan Vladar for a 2-0 lead just 67 seconds into the contest. Aube-Kubel pulled off the move while a defenseman was practically on top of him and with him all the way. He was playing in his second game since his return from a nine-game stay with the Philadelphia Flyers.

But after scoring two goals on two shots in the opening moments of the game it would be the Providence Bruins to grab the momentum. Eventually they found the back of the net for the first time with 2:46 remaining in the first period on Fyten’s first of the night and second of the season.

The Bruins came back to tie game less than three minutes into the second period when their captain, Jordan Szwarz, would score his third of the campaign.

Lehigh Valley regained the lead just over two minutes later when Colin McDonald’s pass from the left wing hit off the leg of Cole Bardreau in the high-slot and was redirected into the net. Bardreau’s fourth of the season did not include a distinct kicking motion and therefore was deemed a legal goal even though it appeared to come off his leg.

Ryan Fitzgerald (5th) struck from the right circle to the far-post on the stick side of Hart at 9:41 to again even the score, this time at 3-3. 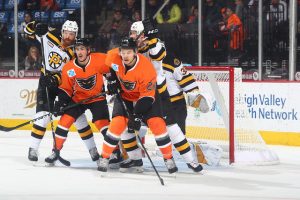 And then a fluky goal for Cameron Hughes with just over five minutes remaining in the second period would put Providence in the lead for the first time. Hart went for a poke-check but the puck was still in the low slot for Hughes who attempted a flick back between his legs behind him. The puck appeared to possibly deflect off the paddle of Hart and then went virtually straight up and blooped over the goalie’s head landing perfectly in the cage to give the Bruins a 4-3 advantage.

The Bruins struck for two more in the third period to complete the victory. Austin Fyten spotted a loose puck at the right pad of Hart who initially tried to catch it in his glove off his chest. Fyten’s second of the night at 2:59 gave the Bruins a 5-3 lead.

And then Cameron Hughes scored his second of the game down low after a Phantoms turnover on a 2-on-1 at 7:14 to finish the 6-3 decision.

Providence out shot the Phantoms 38-21. Lehigh Valley had its streak of six consecutive games with a power-play goal come to an end going 0-for-3 on the man advantage while the penalty kill limited Providence to 0-for-4. The Phantoms’ penalty kill has allowed just one goal in the last 39 chances over the most recent 10 games.