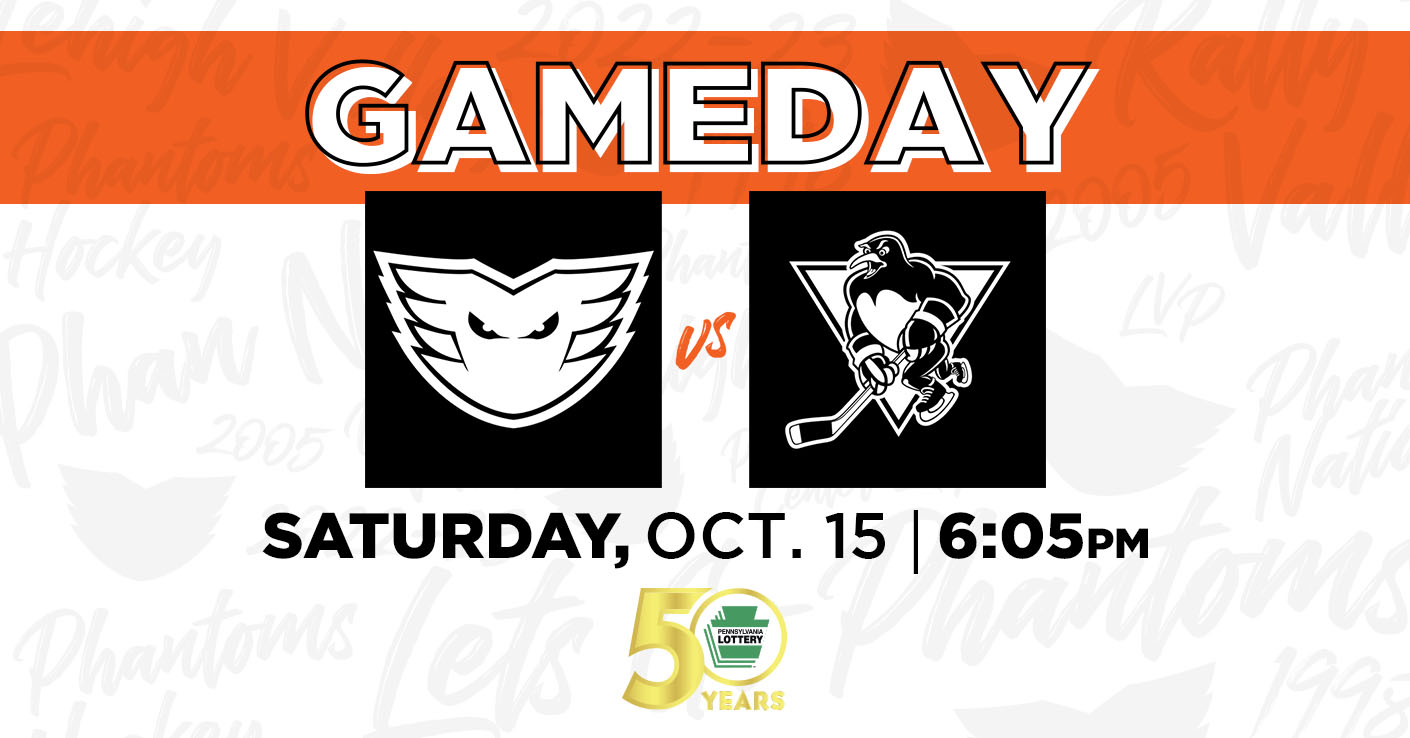 TONIGHT – It’s the season debut for the Phantoms and the first official Phantoms Game Day, presented by the Pennsylvania Lottery. The 2022-23 Phantoms open their campaign at the Wilkes-Barre/Scranton Penguins at 6:05 p.m. It is the first of 12 rivalry matchups against the Penguins this year.

LAST TIME – Cam York’s two-point performance led the Phantoms to a 2-1 win on Wednesday night in the preseason finale. York assisted on Tyson Foerster’s deflection goal. And then broke a 1-1 tie with his shot that deflected in with just 54.4 seconds left. York’s shot was officially credited to Zack MacEwen although it appeared to have gone off a Penguins’ defenseman instead. Troy Grosenick made 18 straight saves in his two perfect periods of work.

The Philadelphia Phantoms won their first-ever game in franchise history on October 4, 1996 with a 6-3 triumph at the Springfield Falcons.
The team also won its won its first-ever game as the Lehigh Valley Phantoms on October 11, 2014 with a 5-2 triumph at Wilkes-Barre/Scranton. Chris VandeVelde scored the first goal for the new AHL market and led the way with a two-goal game.

TRANSACTIONS – Joining the Phantoms yesterday are D-Man Ronnie Attard from the Flyers and forward Charlie Gerard who returns from the Reading Royals.
Hayden Hodgson is on waivers for the purpose of coming to the Phantoms later today.
Jackson Cates has been recalled to Philadelphia.
Linus Sandin has left the team for personal reasons and has been released after clearing unconditional waivers.

AT THE BENCH – Ian Laperriere is entering his second season as head coach of the Phantoms. After eight seasons as an assistant coach with the Philadelphia Flyers, the rugged NHL veteran became the third head coach in Lehigh Valley history. Laperriere played in 1,083 career NHL games amassing 1,956 penalty minutes during his stays with the St. Louis Blues, Los Angeles Kings, Colorado Avalanche and Philadelphia Flyers.
Riley Armstrong, Jason Smith and Bill Downey all return as Lappy’s assistant coaches.

MAKING US PROUD – The Philadelphia Flyers won on their Opening Night 5-2 over the New Jersey Devils to begin the John Tortorella era. Morgan Frost had his first career two-goal game and Wade Allison scored the first goal of the season for the Flyers. Both Frost and Allison spent significant time with the Phantoms last year.

OUTLOOK – There’s a lot to like about this year’s Phantoms squad and opening roster. Ian Laperriere is especially pleased with the added depth that Lehigh Valley has along with some increased speed.

Veteran leaders and captains Cal O’Reilly and Garrett Wilson lead the group that also includes familiar names such as Isaac Ratcliffe and Max Willman who both made their NHL debuts last season. O’Reilly is the AHL’s active career scoring leader and his 535 career assists place him 8th all-time. The veteran 36-year-old of over 1,000 pro games set a personal best with 21 goals last year. 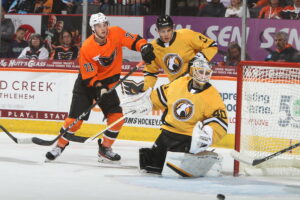 Olle Lycksell is another young rookie who generated positive attention through Philadelphia’s training camp. He is expected to make his official North American debut tonight after playing several exhibition games for the Flyers and Phantoms in the preseason.

Louie Belpedio is a Miami-Ohio product who scored 11 goals as a defenseman for the Laval Rocket last year and previously spent three seasons with the Iowa Wild.

33-year-old goalie Troy Grosenick was a 2nd Team AHL All-Star last year with the Providence Bruins when he led the circuit in GAA (2.00) and Save Percentage (.933). He won the league’s Baz Bastien Memorial Award as Goaltender of the Year in 2017 with the San Jose Barracuda in a season that included a stop at PPL Center in the AHL All-Star Classic.

Popular goalie Pat Nagle is back with the Phantoms for a second season as well. The third-winningest goalie in ECHL history also represented the United States at the Winter Olympics in China last February.

TONIGHT’S OPPONENT – The Wilkes-Barre/Scranton Penguins include former Phantoms goalie Dustin Tokarski…again.
After playing for the Phantoms in 2017-18 and then the Penguins in 2019-20, Tokarski saw his most significant NHL playing time in several years when he played in 42 games for the Buffalo Sabres over the past two seasons. Filip Lindberg from Finland is back in Wilkes-Barre as well. He had looked very strong in net before an injury in November derailed his season.

Drake Caggiula is a veteran of 278 games with EDM, CHI, AZ and BUF and is now trying to work his way back up to the NHL. The former University of North Dakota standout has NEVER played a regular season game in the NHL.

Alex Nylander is a former Buffalo first-rounder who thrived with Wilkes-Barre/Scranton in the second half of last season after coming over from the Chicago Blackhawks organization in a trade.

7th rounder from Finland Valtteri Puustinen led the Penguins in scoring last year as a rookie with 20-22-42. First-rounder Sam Poulin scored 16-21-37 a season ago.

J.D. Forrest is back for a third season at the bench alongside former Rochester Americans captain Kevin Porter as assistant coach. Sheldon Brookbank comes over to Wilkes-Barre to serve as an assistant after the NHL veteran player spent the last three campaigns at the bench of the Chicago Blackhawks. The WBS Penguins were 35-33-8 last year finishing fourth in the Atlantic Division and advancing to the second round of the playoffs.

BROADCAST –  Fans can listen to tonight’s game on the Phantoms 365 app and on 1470-WSAN and on their smart speakers at “Play Phantoms Radio 24/7”. Pregame show coverage from Wilkes-Barre begins at 5:30. The broadcast is also available at the “Listen Live” button on PhantomsHockey.com

UP NEXT – Lehigh Valley is back in action Sunday afternoon with a 3:00 p.m. tilt at the Hershey Bears. 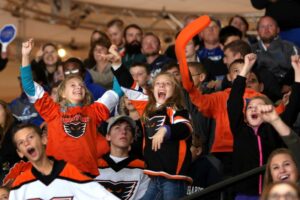