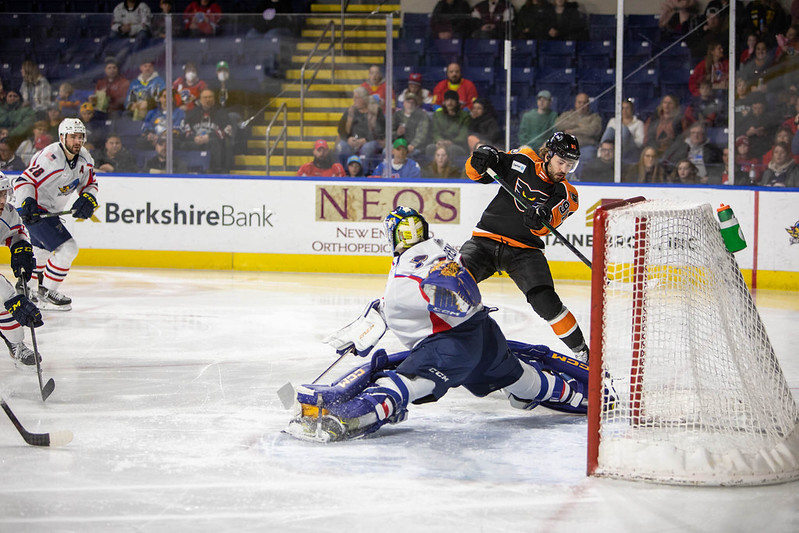 Springfield, MA – Jackson Cates (4th) and Ronnie Attard (4th) both scored and recorded multi-point nights, but the Springfield Thunderbirds (7-6-3) ended the Lehigh Valley Phantoms’ (7-6-1) season-best, five-game winning streak on Sunday evening by a 6-4 final count at the MassMutual Center. Both teams combined for 87 shots on goal and 76 penalty minutes in a spirited, seesaw affair. The Phantoms conclude a successful weekend with a 2-1-0 road record.

Garrett Wilson (3rd) and Wyatte Wylie (1st) also found the back of the net for the Phantoms. Wilson and Kevin Connauton both engaged in fights in the first period of a feisty contest that saw 76 combined penalty minutes. 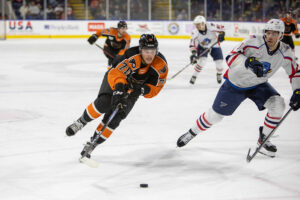 The opposition started the scoring, but the Phantoms continued the common theme of finding a quick answer throughout the successful weekend. Springfield tested Phantoms goaltender Pat Nagle early and often, and Brady Lyle tallied only 6:51 into the contest. Dmitrii Samorukov threw the puck on frame from the left-point, and Lyle buried a lively rebound chance after an initial stop by Nagle.

Lehigh Valley dictated the play for the remainder of the opening period and was soon rewarded for its efforts. At 13:19, Alex Kile blasted a power-play chance which glazed off Garrett Wilson at the net front for Wilson’s third goal of the season. Ronnie Attard recorded the secondary helper for his fifth assist of the young season.

Cam York nearly provided his club with a 2-1 lead after denting the goal post with a glorious scoring opportunity. Minutes later, Lehigh Valley persisted and soon seized another chance on an offensive zone rush. After a neutral zone board-battle win, Jordy Bellerive stormed the left-wing with time and space into the Thunderbirds’ defensive zone. A crisp pass from Bellerive found an open Wyatte Wylie in the high-slot who buried his first goal of the season at 15:53 to give Lehigh Valley a one-goal advantage at first intermission. Shots after 20 minutes were even at 12-12.

Springfield answered with two goals of its own in the middle stanza but the Phantoms once again came from behind. Former Wilkes-Barre/Scranton Penguins forward Anthony Angello deflected home a perimeter shot at 6:35 for the equalizer. The Thunderbirds regained the lead at 11:44 courtesy of a 5-on-3 power-play goal from North American hardest-shot record holder, Martin Frk.

Before the second intermission, the Orange and Black once again showed strong resiliency. Jackson Cates tallied for a second consecutive night, hammering home a shot from the left face-off circle after an initial try from Tyson Foerster was blocked. The goal came one second after a power play had expired. Shots after 40 minutes were 34-23 Thunderbirds with the score deadlocked at 3-3.

In the third period, Angello scored twice more at 8:46 and 12:39 to complete the hat-trick performance. Springfield grabbed a 4-3 lead on the man-advantage when Angello crashed the goal crease and deposited a loose puck behind Nagle. His third goal also came on the power-play via a net front deflection after an initial shot from Jake Neighbours.

Greg Printz extended the T-Birds lead to 6-3 with a power-play marker for his first goal of the season at 19:03. Only 21 seconds later, Ronnie Attard hit pay-dirt for his fourth goal of the campaign to round out the 6-4 final scoring line.

The Thunderbirds thrived with a 4-on-6 power-play effort and cranked up 46 shots on goal, most allowed by the Phantoms this season. Lehigh Valley’s 41 shots represented its second-highest total of the season just one day after its own 46-shot performance at Providence.

Springfield avenged a November 11 decision at PPL Center in which the Phantoms won 2-1. The Phantoms will return to Western Mass for a rematch on December 23.

The Lehigh Valley Phantoms conclude their four-game road swing on Friday, November 25 against the Wilkes-Barre/Scranton Penguins at Mohegan Sun Arena and will return to PPL Center on Saturday, November 26 taking on the Rochester Americans featuring a Postgame Skate with the Phantoms players. 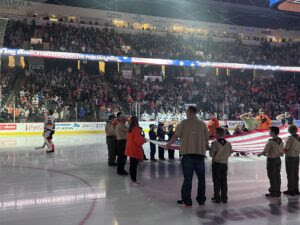