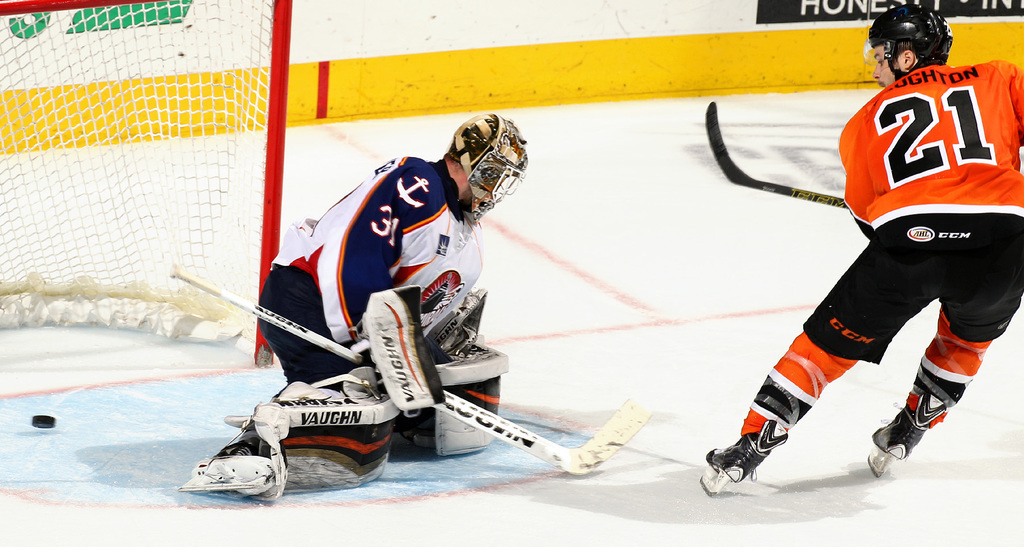 Lehigh Valley Improves to 6-0 vs. Norfolk This Season

Lehigh Valley, PA – Scott Laughton scored in regulation and netted the deciding marker in the shootout while Rob Zepp recorded 33 saves as the Lehigh Valley Phantoms outlasted the Norfolk Admirals 2-1 Friday evening in front of 8,143 fans at PPL Center. With the win, the Phantoms improved to 32-32-6-1 overall this season and are now a perfect 6-0 against Norfolk this year. Lehigh Valley, which has claimed each of the first six head-to-head meetings with the Admirals by a single goal including three via shootouts, will welcome Norfolk back to downtown Allentown again tomorrow evening. 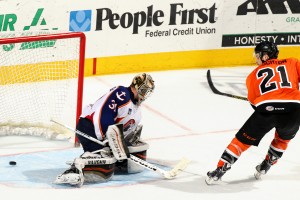 Saturday’s contest marked the 12th overtime/shootout thriller at PPL Center this season. With Saturday’s triumph, the Phantoms improved to 4-1 in home shootouts this year and now boast the most shootout victories overall (seven) in the entire AHL. In all, Lehigh Valley is now 14-7 in post-regulation decisions.

Laughton’s 12th goal of the season proved to be the only regulation conversion for the Phantoms. The 20-year-old center has been on fire in recent weeks as he’s now produced five goals, three assists and eights points over his last seven games. Adam Comrie and Jason Akeson assisted on Laughton’s tally as Akeson moved into sole possession of fourth place on the Phantoms’ all-time scoring list with 223 points.

Meanwhile, Zepp earned the victory between the pipes for Lehigh Valley with 33 saves on 34 Admirals shots. Making his ninth consecutive start, the 33-year-old netminder turned in his sixth 30-save performance over the last seven games in earning his 20th win of the season. After 33 saves in regulation and overtime, Zepp sealed the triumph with two saves on three Norfolk attempts in the shootout. 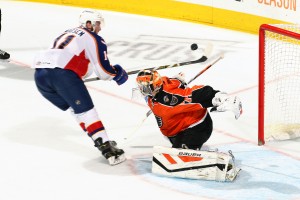 Saturday’s game also saw the continuation of the Phantoms’ strong penalty killing efforts of late. Lehigh Valley’s penalty kill was a perfect 3-for-3 against the Admirals and has now surrendered just two power play goals against over the last 10 home games. During their recent run, the Phantoms are an impressive 35-for-37 (94.6 percent) when skating a man short at PPL Center.

Norfolk opened the scoring exactly two minutes into the game when a wraparound by Matt Bailey deflected off Zepp’s left skate before trickling across the goal line. Joseph Cramarossa and Robert Czarnik assisted on Bailey’s sixth goal of the year.

With his team facing an early deficit, Phantoms head coach Terry Murray used his one and only timeout less than five minutes into the contest and the stoppage seemed to rally the orange and black. Lehigh Valley responded with an immediate offensive push back and produced its best shift of the period only minutes following the timeout when Kevin Goumas, Cole Bardreau and Zack Stortini used a relentless forecheck leading to a series of scoring chances.

The Phantoms carried that momentum into the second stanza and leveled the contest a little over eight minutes into the middle frame when, while on the power play, Laughton snapped in his 12th goal of the season. Comrie garnered the primary assist while Akeson picked up the secondary helper thanks to a tremendous play at the left point to keep the puck in the attacking zone. The man-advantage marker came 8:26 into the second period as Lehigh Valley improved to 25-11-1 when scoring a power play goal this season. 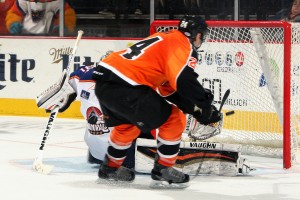 Zepp helped preserve the 1-1 deadlock late in the middle frame when, in the midst of an Admirals power play, Dave Steckel broke free in the slot only to be denied by Zepp’s outstreched glove on a backhand attempt in close.

The game remained tied 1-1 through the third period and overtime despite a combined 20 shots on goal, including 13 Phantoms offerings, through the final 27 minutes of action.

Petr Straka and Laughton then scored in the shootout while Shea Theodore was the only Norfolk skater to convert as the Phantoms claimed their league-leading seventh shootout victory.

Lehigh Valley out shot the Admirals 35-34 as the Phantoms moved to 11-7-3 when outshooting their opposition this season. Meanwhile, Lehigh Valley finished 1-for-5 on the power play while Norfolk failed to convert in three man-advantage opportunities.

The Phantoms cap their weekend series with Norfolk tomorrow, April 11th as they welcome the Admirals back to PPL Center for a 7:05 PM showdown. Tomorrow’s game is Fan Appreciation Night with hundreds of prizes to be given away in celebration of the best fans in the AHL. The Phantoms will also be wearing their specialty Allentown Police Department jerseys again which will be auctioned off through a live post-game auction immediately following Saturday’s game. Proceeds from the auction will benefit the Allentown Police Department.

A limited number of tickets for tomorrow’s highly-anticipated contest are available now at pplcenter.com, by calling 610-347-TIXX (8499) or in-person at the Mealey’s Furniture Box Office at PPL Center (701 Hamilton).