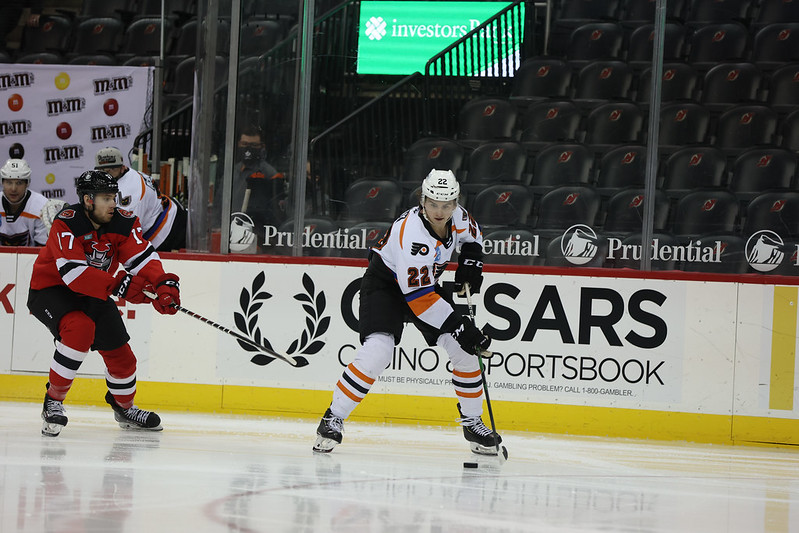 Newark, NJ – Chris Mueller (6th) scored the tie-breaking power-play goal with just 7:45 remaining to give the Phantoms a 2-1 win at Prudential Center in Newark on Wednesday night. The game was played in the NHL arena home of the New Jersey Devils instead of the practice arena next door where the Binghamton Devils had been playing all of their home games this year.

David Kase (3rd) broke a 0-0 tie late in the second period for Lehigh Valley while Felix Sandstrom made 26 saves on 27 shots that he saw in the game.

Brett Seney scored the lone goal for the Devils with 12:58 remaining in the third period to tie the game at 1-1.

Sandstrom briefly exited the game going down the tunnel with 7:34 remaining in the second period. Zane McIntyre entered and made three saves on three shots for the rest of the middle frame before Sandstrom took over again in the crease to begin the third.

The game began with a scary incident when Tyson Foerster crashed out head-first into the boards and left the game with injury. Binghamton’s Matt Hellickson was assessed a boarding major penalty and game misconduct on the play. The Phantoms were unable to cash-in during their five-minute power play.

Kase scored the team’s first goal at Prudential center with a knee drop from the high-left slot after a dig in the corner and connection by Zayde Wisdom who recorded the first of his two helpers in the game. Kase was back in action for the first time since an injury on April 21.

Seney equalized in the third from the right circle blasting to the upper-far corner on the stick-side of Sandstrom for a 1-1 tie.

But Chris Mueller drew a power play for the Phantoms when he was all alone in deep in pursuit of the puck while others were changing. With just seconds remaining on that power play, Wisdom cranked a one-timer from the left dot that hit off the paddle of goalie Gilles Senn and deflected over his shoulder and behind him. Mueller was first to get there to nudge it into the back of the net for the game-winning goal and his 247th all-time which is tops among active AHL players.

The Phantoms improved to 8-1-2 against the Devils this season and stayed alive in the North Division race. Lehigh Valley will now root FOR the Devils on Saturday afternoon to pick up a win at Hershey to maintain their chance to catch the Bears for the Teddy Oke Trophy.

The Phantoms will compete in the all new Battle on Hamilton on Thursday night at PPL Center splitting into Team Gritty against Team meLVin for 3-on-3 hockey and skills competitions between periods.

The Phantoms have two games remaining in the 2021 season hosting the Wilkes-Barre/Scranton Penguins on Saturday night and then tangling with the Binghamton Devils once again at PPL Center on Sunday at 3:05 p.m. Tickets for both home games are available HERE