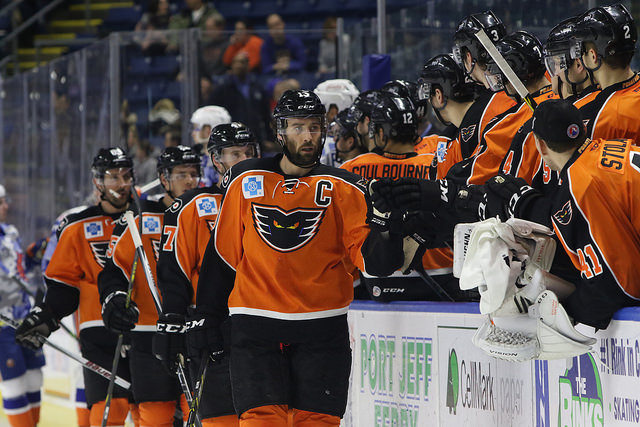 Wilkes-Barre, PA – Colin McDonald racked up two more goals to conclude a tremendous week for him and the team as the Lehigh Valley Phantoms prevailed at Wilkes-Barre/Scranton 5-3 in a feisty and occasionally nasty, penalty-filled affair. The Phantoms impressively swept the two-game weekend home-and-home series from the rival and first-place Wilkes-Barre/Scranton Penguins and now enter the AHL All-Star Break on a Lehigh Valley record five-game winning streak.

With the victory and sweep, the Phantoms vault over the .500 mark with an overall record of 22-21-3 and also close to within two points of fourth-place Providence in the ever-tightening race for a coveted post-season position.

McDonald accumulated an incredible 10 points on six goals and four assists during the Phantoms’ perfect week. The veteran captain even had a chance to cap his monster stretch with his SECOND hat trick of the week but he selflessly turned down his golden opportunity to score a second empty-netter on the night by trying to set up Taylor Leier instead whose shot was subsequently deflected.

Conner’s goal, which pushed the Phantoms up to a 3-1 advantage, was particularly impressive and his drag and pull-back around a diving and sliding Reid McNeil in the left circle is certainly a leading candidate for the most spectacular conversion of the season.

The high-flying Phantoms are putting it all together at the same time but the offense has been the most impressive aspect. Lehigh Valley has scored 25 goals in their five-game win streak which includes triumphs by counts of 4-1, 6-5 (SO), 6-3, 4-3 (OT) and 5-3.

Max Lamache dropped the gloves in the second period with McNeil in the game’s only official “fight.” But the contest was marred by several scrums and general nastiness as the rivalry appeared to kick into top-gear in front of a sellout crowd in northeast Pennsylvania. The Phantoms were able to successfully maintain the discipline required to not give the Penguins their much sought-after additional power play. Suffice to say the long-time rivalry between these Pennsylvania foes is alive and well.

Will O’Neill (6th) of Wilkes-Barre/Scranton scored on the power play through a screened Anthony Stolarz for the lone strike of the first period.

But the Phantoms converted in the opening minute of the second period with Taylor Leier in the low-slot deflecting Andrew MacDonald’s center-point blast on the power play.

Five minutes later was Colin McDonald on a fine feed from Chris Conner to extend the lead to 2-1.

It would be under a minute later for Chris Conner to pick one off in front of the Phantoms bench and dipsy-doo his way in for his highlight-reel caliber goal. McNeill went down to his belly waving his stick to take away Conner’s passing option from the left circle but Conner was able to successfully put on the brakes and pull the puck backwards around the waving stick of McNeill and then cap his fancy moves with a conversion to the high glove of Penguins goalie Tristan Jarry.

Scott Wilson scored the first of his pair of goals a few minutes later to pull the Penguins to within 3-2.

Pavel Padakin’s first career AHL goal to extend Lehigh Valley’s advantage came with a fair bit of controversy. Tyrell Goulbourne and Tom Sestito were tangled in the crease while goalie Tristan Jarry was down. But while the puck was still in play, Padakin from the left wing connected on a line-drive into the mostly open net and the referee determined that goaltender interference was not a factor in Jarry’s inability to regain his position.

The remainder of the second period would involve one scrap after another as the two teams’ tempers boiled over in the concluding game of the two-game weekend set. Mark Alt and Oskar Sundqvist were among the combatants while Samuel Morin and Will O’Neill challenged each other as well. With a few seconds remaining in the period, Penguins captain Tom Kostopoulos took exception to Davis Drewiske and eventually offered a hard slash and unsportsmanlike conduct for a pair of penalties.

Scott Wilson’s league-leading 22nd goal of the season put the Penguins back to within one with ten minutes to go but McDonald’s empty-netter in the final minute would seal the Phantoms fifth consecutive triumph.

The Phantoms out shot the Penguins 35-27. Lehigh Valley was 1-for-8 on the power play while Wilkes-Barre/Scranton finished at 2-for-7.

The Phantoms improved to 4-4 against the Penguins and now own a 3-1 record at Mohegan Sun Arena.

The team is now off for the AHL All-Star Break. Nick Cousins and Anthony Stolarz will represent the Phantoms on the Atlantic Division squad at the Skills Competition on Sunday Night and the AHL All-Star Game on Monday.

Lehigh Valley returns from the break with a pair of road games next weekend at the Bridgeport Sound Tigers on Friday and at the Hershey Bears on Saturday.

The Phantoms are then back in action at PPL Center on Wednesday, February 10 when they welcome the rival Binghamton Senators back to downtown Allentown. The game features a Career Fair with a host of representatives from area sports teams on hand. A limited number of tickets remain so be sure to secure yours now at pplcenter.com, by calling 610-347-TIXX [8499] or in person at the Mealey’s Furniture Box Office at PPL Center [701 Hamilton Street].