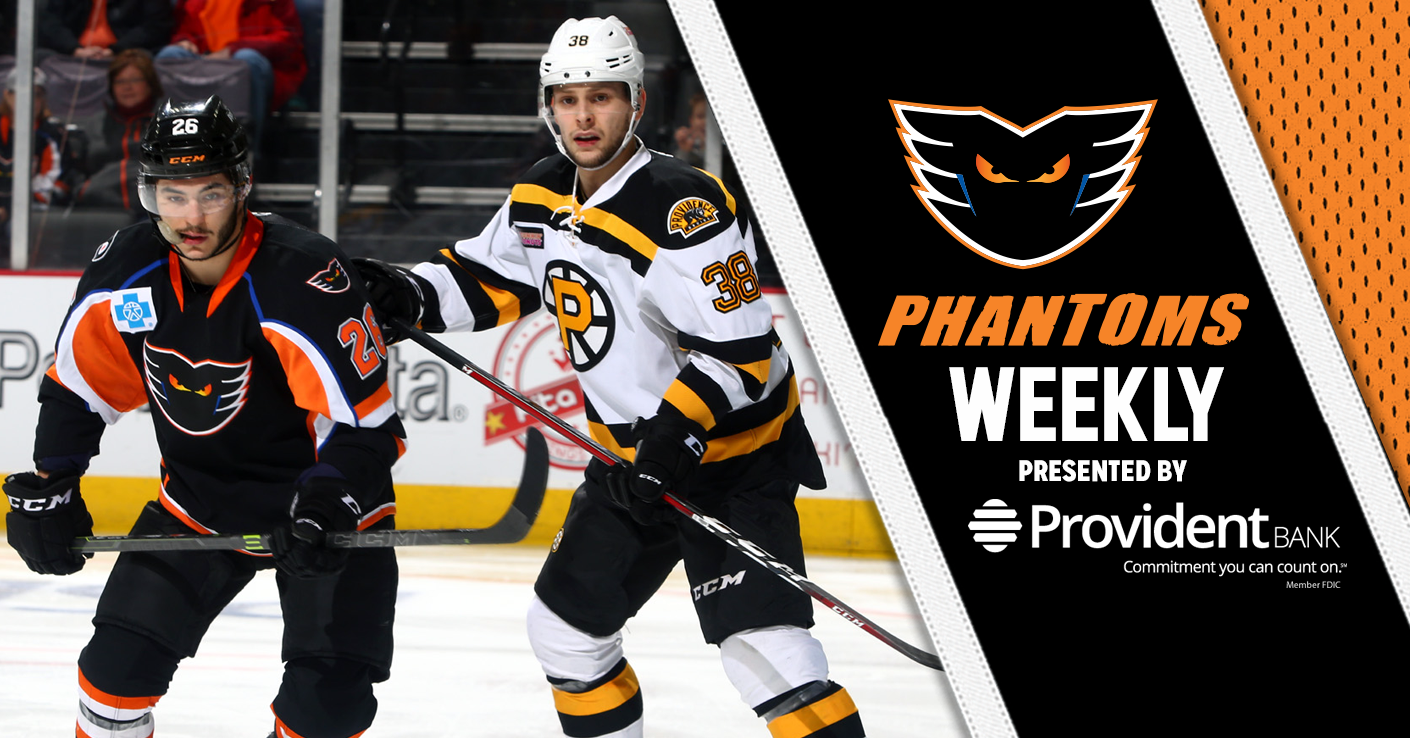 Atlantic Division Champions for the 2017-18 season, the Lehigh Valley Phantoms (47-19-5-5, 104 pts., 0.684 pts., pct.) continue their quest for the 2018 Calder Cup Championship this weekend as they resume their best-of-five Atlantic Division Semifinals series with the Providence Bruins. The Phantoms are coming off a split through the first two games, which both took place at Dunkin Donuts Center in Providence last weekend. Lehigh Valley opened the series with a 3-2 triumph on Friday before the Bruins leveled the best-of-five series at one game apiece thanks to a 5-3 victory on Saturday. 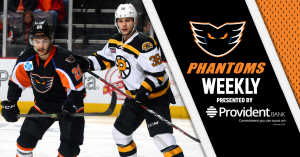 Now the series shifts to PPL Center in downtown Allentown where it will remain until its conclusion. The tightly-contested series resumes this Friday, April 27 at 7:05 p.m. with Game 3 before Game 4 on Saturday, April 28 and, if needed, Game 5 on Monday, April 30. Be sure to secure your tickets today to experience the thrills and excitement of Phantoms playoff hockey at PPL Center by clicking HERE.

Lehigh Valley’s Danick Martel (2 goals, 2 assists) and Providence’s Austin Czarnik (4 assists) lead all scorers with four points each through the first two games of the series. Phantoms’ forward Greg Carey has found the back of the net in each of the first two games of the series while Bruins’ forward Ryan Fitzgerald scored twice in Game 1 followed by Peter Cehlarik who tallied twice in Game 2.

Lehigh Valley’s Alex Lyon has been razor sharp between the pipes through the first two games having allowed just six goals against while turning aside an impressive 70 of 76 shots (0.921 save percentage).

The Phantoms’ power play converted in each of the first two games and is currently ranked second among all playoff clubs at 37.5 percent (3-for-8). Meanwhile, Lehigh Valley’s penalty kill has thwarted eight of Providence’s first 10 man-advantage opportunities in the series. 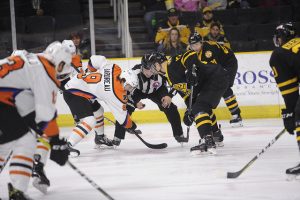 Danick Martel (1st, 2nd) scored twice and T.J. Brennan added a pair of assists as the Phantoms opened their best-of-five series with the Bruins with a 3-2 win in front of 4,418 fans inside Dunkin Donuts Center in Providence. Greg Carey (1st) also found the back of the net as Lehigh Valley turned in an impressive 2-for-5 performance on the power play in earning the team’s third straight road playoff victory.

Alex Lyon earned the win in goal after turning aside 39 of Providence’s 41 total shots, including each of the Bruins’ 15 shots on goal in the third period.

Ryan Fitzgerald (1st, 2nd) scored both goals for Providence while Austin Czarnik, the Bruins’ leading scorer during the regular season, added a pair of assists. 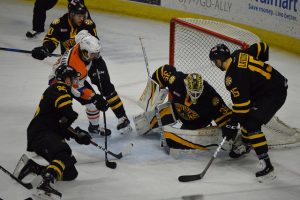 Greg Carey (2nd) buried his second goal in as many games and Mike Vecchione notched a goal and an assist but it wasn’t enough as the Providence Bruins were able to level their best-of-five series with a 5-3 win in front of 4,583 fans inside Dunkin Donuts Center in Providence. Mark Friedman (1st) also found the back of the net for Lehigh Valley in front of goaltender Alex Lyon who turned in another strong performance between the pipes as he answered 31 of 35 shots.

Forward Danick Martel chipped in a pair of assists as he recorded his second multi-point outing of the series.

Peter Cehlarik (1st, 2nd) scored twice for Providence while Austin Czarnik chipped in another two assists in the winning effort. Anton Blidh, Jakob Forsbacka Karlsson and Jordan Szwarz also scored for the Bruins in front of All-Star goaltender Jordan Binnington who earned the victory in goal with a 23-save performance.