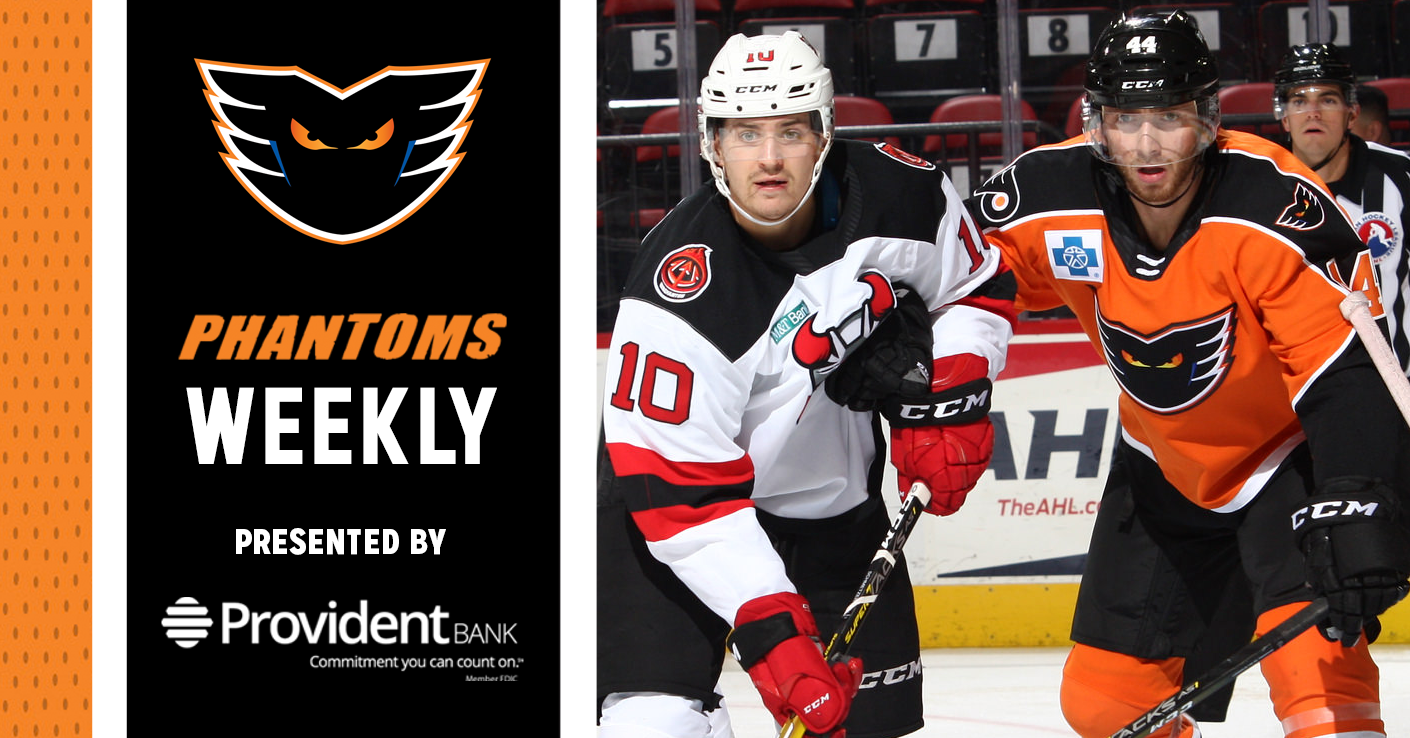 The Lehigh Valley Phantoms played their first midweek contest of the 2018-19 season this past Wednesday night against the Hartford Wolf Pack.  Lehigh Valley got the scoring started early on, just 1:05 into the first period, when Greg Carey potted his fifth goal of the season thanks to a centering feed from linemate Phil Varone.  From there, the rout was on as the Phantoms netted a total of seven goals — including two off the stick of Chris Conner — en route to a 7-3 explosive win over Hartford.

On Saturday night, Lehigh Valley faced their first North Division opponent of the season when they took on the Binghamton Devils on the road.  Despite the Devils finding the back of the net first, the Phantoms answered back when a shot off the stick of Philippe Myers found its way into the net to tie the game at 1-1 at the 6:55 mark of the first period.  T.J. Brennan, Chris Conner, Nic Aube-Kubel and Tyrell Goulbourne added to the lead propelling Lehigh Valley to a 5-2 win over Binghamton in the first of three meetings the two teams will play in the next week.

Brennan’s goal, his fourth of the season which came on the power-play late in the second period, marked the sixth consecutive game that the Phantoms tallied at least a single goal on the man advantage.  Over those six contests, dating back to October 13, the team was nine for 31 (29.03%) on the power play with three multi-goal games.

Goaltender Carter Hart made 29 saves on 31 shots — including some highlight reel stops — to earn his second professional victory of the season.

The Phantoms traveled to Chocolatetown for a late afternoon game against the rival Hershey Bears on Sunday.  Lehigh Valley fell behind early allowing a goal just 1:17 into the contest and then saw the Bears stretch their lead to 2-0 just 1:51 into the second period.  Rookie forward Connor Bunnaman fired back for the Phantoms — netting the first goal of his professional career — near the halfway point of the second period, making it 2-1 heading into the intermission.  In the third period, a penalty-shot goal, the first ever to be scored against the Lehigh Valley Phantoms, from Riley Barber would assist Hershey in claiming a 3-1 win over the Phantoms by the end of the night.

The regulation loss on the road was the first of the season for Lehigh Valley, who were 4-0-0-1 entering into the contest. 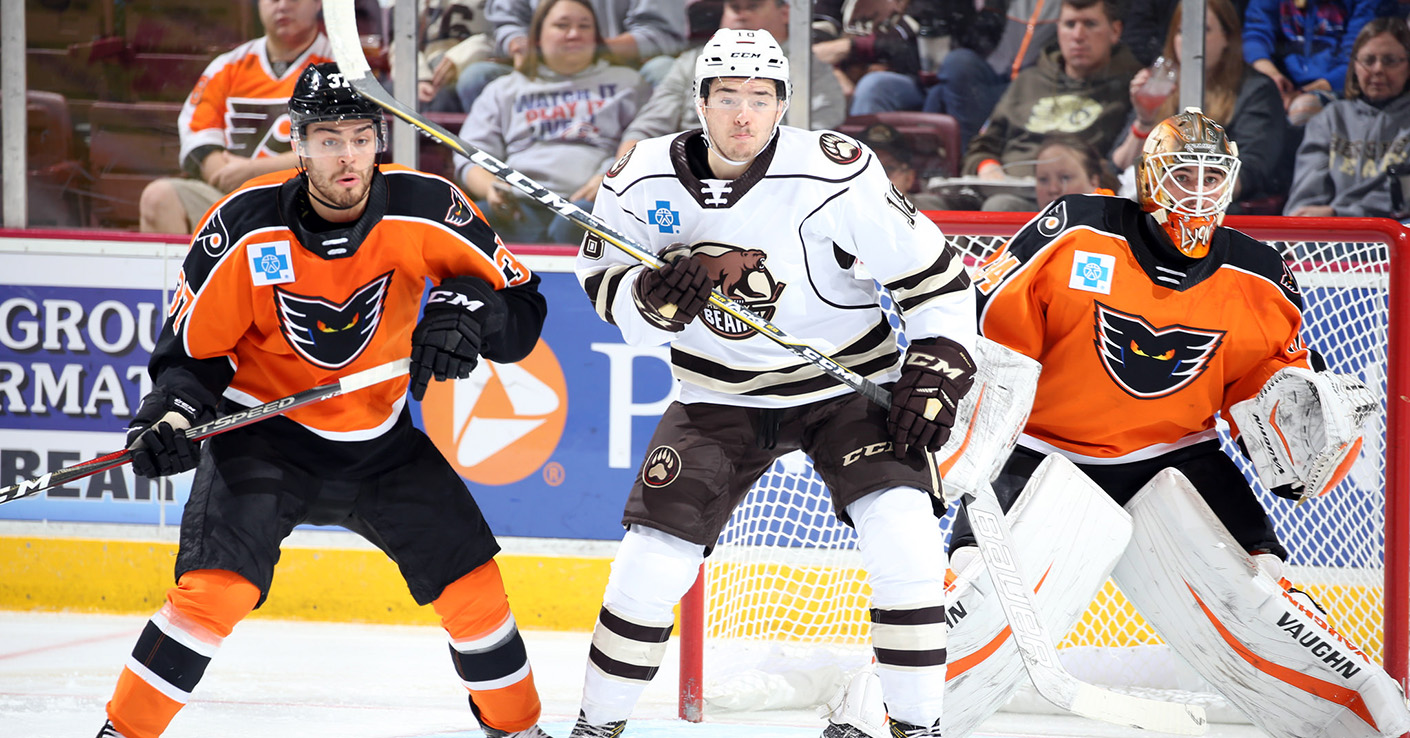 Friday night will mark the final game of the Phantoms current six-game road swing — the team’s longest of the season — when they face the Binghamton Devils.  This will be the second of three times that the two teams will meet in just eight days, the first of which was a 5-2 victory for the Phantoms this past Saturday night.  Since that first meeting of the season, Binghamton has not played and is currently holding on to fourth place in the North Division with a 4-5-1-0 record.

The New Jersey Devils recalled goaltender Cory Schneider from his conditioning loan to Binghamton on October 29, but also loaned veteran goaltender Eddie Lack to the the AHL Devils for a conditioning assignment of his own.  It’s likely the Phantoms will see him in one of the two games this weekend.

Lehigh Valley will return home to PPL Center for the first time in six games on Saturday night when they take on the Binghamton Devils at the back end of their home-and-home weekend series.  This will be the third and final match up against the Devils in just eight days and will be the last time the Phantoms see their North Division foe until January 11.  Heading into the weekend, defenseman Philippe Myers (1G-2A) and forward Phil Varone (3A) are currently leading the charge against Binghamton with three points each against the Devils on the season.

Saturday is the Phantoms Go Birds Tailgate featuring an appearance by the Philadelphia Eagles Cheerleaders.  We encourage all fans to wear their green as the team celebrates the World Champions.  Tickets for Saturday night’s contest against the Devils are still available and can be purchased HERE. 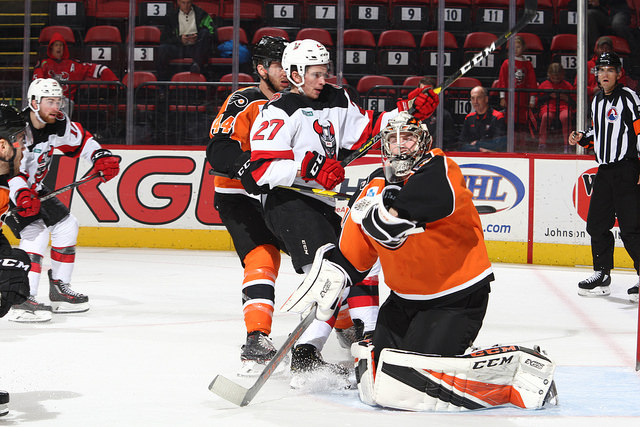 Rookie forward Connor Bunnaman potted his first professional goal in Sunday afternoon’s game against the Hershey Bears.  The 20-year old tallied his first pro point on October 20 against the Wilkes-Barre/Scranton Penguins and, with that, now has two points (1G-1A) in five games this season.

As of Sunday, Phil Varone is currently riding a seven-game point streak — dating back to October 13 — in which he has tallied two goals and 10 assists for 12 points.  The reigning league MVP is also tied for third in the league for longest point streak during the 2018-19 season.

Goaltender Carter Hart notched his second win as a professional in Saturday night’s 5-2 win over the Binghamton Devils, making 29 saves on 31 shots which included some highlight-reel stops.