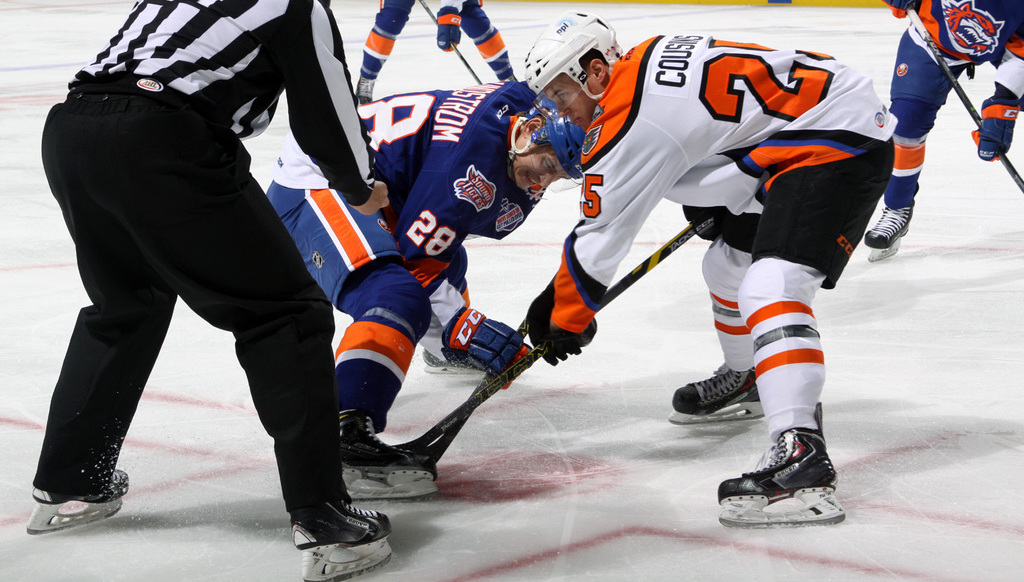 The Lehigh Valley Phantoms continue their push for one of the coveted playoff spots in the Eastern Conference this weekend with a pair of games at PPL Center. 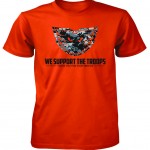 First, Lehigh Valley (25-23-6-1, 57 pts.) welcomes the Bridgeport Sound Tigers to downtown Allentown for the final time this season on Friday, March 6th. Friday’s contest is another Free Shirt Night at PPL Center as all fans in attendance will receive a FREE Military Appreciation Phantoms shirt!

The Phantoms enter the week in sole possession of third place in the East Division and currently trail Providence by nine standings points for the eighth and final playoff spot in the Eastern Conference. Lehigh Valley possesses two games-in-hand on the Bruins. Meanwhile, Bridgeport (21-29-5-1, 48 pts.) enters the week fifth among the five teams in the Northeast Division and currently holds the lowest standings point total in the entire Eastern Conference. The Sound Tigers enter the week having lost nine consecutive games and have been outscored 41-15 during their recent skid. 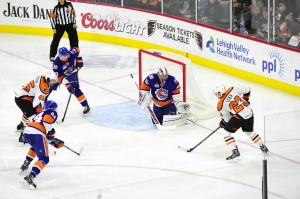 Friday’s tilt marks the third of four total meetings during the 2014-2015 regular season between the Phantoms and Sound Tigers with Lehigh Valley holding a 1-0-1 record head-to-head with Bridgeport. After a 3-2 shootout defeat at PPL Center on December 6th, the Phantoms exacted a little revenge just 24 hours later with a 5-3 triumph at Webster Bank Arena in Bridgeport. Jason Akeson had a monster night in the victory for Lehigh Valley with a season-high four points (two goals, two assists) while Darroll Powe and Blair Jones each chipped in a pair of points. Anthony Stolarz backstopped the win with 34 saves on 37 Sound Tigers shots.

Then, on Saturday, March 7th, the Phantoms welcome the Portland Pirates to town for the first and only time this season. Saturday’s game is another Legends Night as all fans in attendance will receive a FREE Collector’s Edition Poster spotlighting 2005 Calder Cup Champion and AHL Hall of Fame defenseman John Slaney!

Portland (30-22-3-1, 64 pts.) is currently fourth in the tightly-contested Atlantic Division but enters the week just two points back of Providence for the final postseason berth in the Eastern Conference. Saturday’s showdown is the second and final meeting this season between the Phantoms and Pirates following Lehigh Valley’s 3-0 setback at the Cross Insurance Arena in Portland on November 8th. 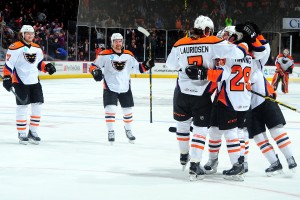 Brandon Manning netted the game winner 3:27 into overtime as the Phantoms rallied for a dramatic, come-from-behind 3-2 victory over the Binghamton Senators in front of 8,964 fans at PPL Center. Kevin Goumas opened the scoring with his fifth goal of the season and it was Brett Hextall’s fourth of the year that leveled the contest just prior to the midway point of the third period. Manning finished the contest with a goal and an assist as the 24-year-old blueliner notched his ninth multi-point game this season.

Anthony Stolarz earned the victory between the pipes with 25 saves on 27 shots. The victory came in front of the second-largest crowd to enjoy a Phantoms game this season as PPL Center hosted Lehigh Valley’s 15th sellout of the 2014-2015 season. With the win, the Phantoms improved to 6-6 in overtime this year and an impressive 15-5-6-1 in one-goal games this season. 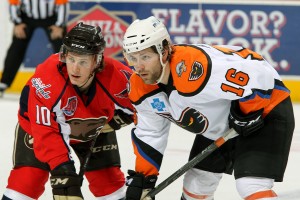 The Phantoms outshot the Hershey Bears 37-16 Sunday evening but Bears goaltender Philip Grubaueir turned aside each of Lehigh Valley’s 37 total offerings as Hershey earned a 2-0 victory at Giant Center. The 16 shots allowed were the fewest the Phantoms have surrendered in a single game this season.

Dustin Gazley and Stanislav Galiev both scored for the Bears while Rob Zepp, back between the pipes for Lehigh Valley after a 12-day stint with the Philadelphia Flyers, recorded 14 saves.

Service Electric’s TV2 Sports will be broadcasting live all of the Phantoms’ 11 remaining regular season home games. If you can’t make it out to the rink, be sure to catch all the exciting action in high definition with Steve Degler and former Flyers and Phantoms goaltender Brian Boucher! And don’t miss “Phantoms – Breaking the Ice” every Monday from 7:00 – 8:00 PM throughout the season live at Chickie’s & Pete’s (701 Hamilton Street)!

Tickets for all of the Phantoms’ 11 remaining regular season home games are available now at the Mealey’s Furniture Box Office at PPL Center (7th & Hamilton), by calling 610-347-TIXX (8499) or online at pplcenter.com.