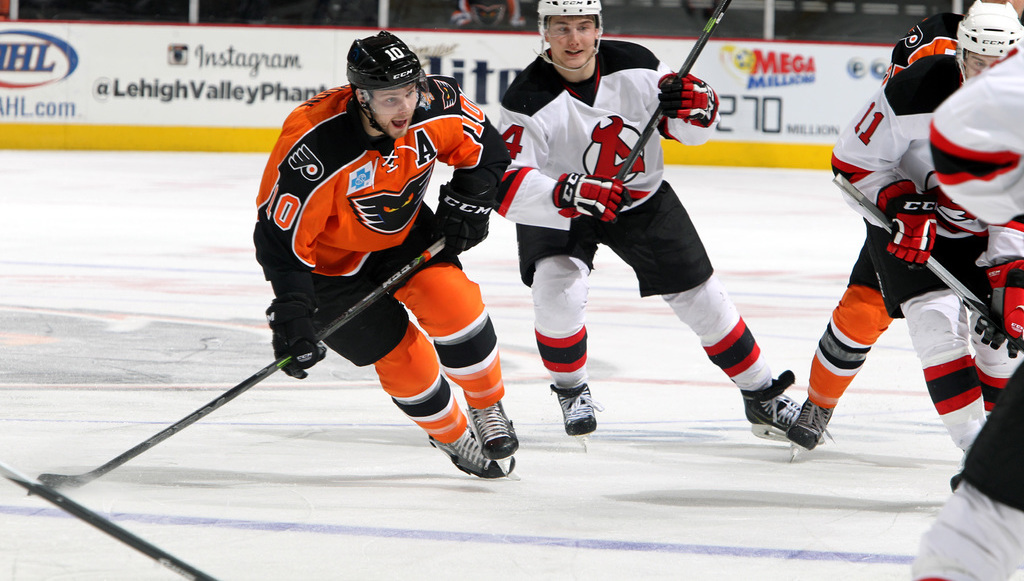 After a brief respite during the All-Star break, the Phantoms return to action in full force later this week with three games in three days. 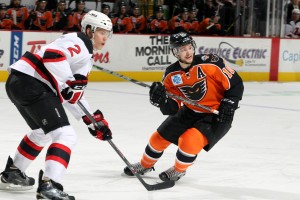 Lehigh Valley (20-16-4-1, 45 pts.) kicks things off tomorrow with the team’s first Thursday showdown of the season as the Phantoms welcome the Albany Devils to PPL Center for the final time this season. The Phantoms enter the week in sole possession of third place in the East Division and are currently just five points back of the second-place Wilkes-Barre/Scranton Penguins and only six points behind the division-leading Hershey Bears. Lehigh Valley enters the week having won six of its last eight home games and six of 10 tilts overall.

Thursday’s contest marks the fourth and final meeting of the 2014-2015 regular season between the Phantoms and Devils with Lehigh Valley holding a 0-2-1 record head-to-head against Albany. The Devils hung on for a 3-2 win at PPL Center in the most recent get-together and the only prior meeting in downtown Allentown. Albany enters the week fourth among the five teams in the Northeast Division and has claimed four of its last six games overall.

The Phantoms then return to PPL Center just 24 hours later as they welcome the rival Hershey Bears back to town. Friday’s showdown marks the eighth of 12 total meetings this season between the in-state rivals with Lehigh Valley holding a 3-4 record head-to-head against the Bears. The home team had claimed each of the first six meetings until Hershey notched a 7-2 win in downtown Allentown last week. The Bears enter the week atop the East Division but just one point clear of second-place Wilkes-Barre/Scranton and only six points ahead of third-place Lehigh Valley. 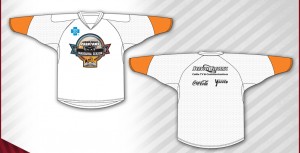 Friday’s contest features a Free Youth Jersey giveaway for the first 3,000 kids in attendance (ages 14 and under). It’s also meLVin’s Birthday Bash as everyone’s favorite puck-nosed pladottle celebrates with some of his craziest mascot friends. Tickets for both highly-anticipated games at PPL Center are available now at the Mealey’s Furniture Box Office at PPL Center (701 Hamilton), by calling 610-347-TIXX (8499) or online at pplcenter.com.

The Phantoms then conclude their busy post-All-Star week on Saturday as Lehigh Valley heads to Wilkes-Barre/Scranton for a meeting with the Penguins. Saturday’s showdown marks the sixth of 12 total meetings this season between the Pennsylvania rivals with the Phantoms holding a 2-2-1 record head-to-head against the Penguins. Lehigh Valley is 1-0-1 against Wilkes-Barre/Scranton at PPL Center this year and claimed the most recent gathering in downtown Allentown with a 2-1 shootout triumph back on December 13th. The Phantoms enter the week just five points back of the Penguins in the East Division standings with three games-in-hand on their in-state foes. 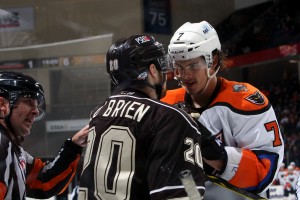 Petr Straka scored just 3:15 into the contest and All-Star blueliner Brandon Manning pumped in his seventh goal of the season but the Hershey Bears were able to claim a 7-2 win inside PPL Center. It marked the first time this season that the road team has claimed any of the head-to-head meetings between Lehigh Valley and Hershey.

Kevin Goumas and Adam Comrie each recorded their first multi-point games of the season as the Phantoms’ hard-fought effort in Syracuse fell just short in a 4-2 setback to the Crunch. Goumas tallied a goal and an assist while Comrie chipped in a pair of helpers for Lehigh Valley. Petr Straka also found the back of the net as he became the third Phantoms skater this season to reach the double-digit mark in goals scored.

Lehigh Valley’s penalty kill was a perfect 8-for-8 while goaltender Anthony Stolarz turned in his 10th 30-save performance of the season. 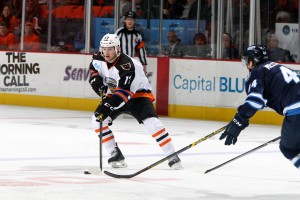 Petr Straka extended his goal-scoring streak to three straight games with his 11th conversion of the year and Kevin Goumas tallied a goal and an assist for the second straight night as the Phantoms outlasted the St. John’s IceCaps 4-3 in front of a record-setting crowd of 8,983 fans at PPL Center.

Taylor Leier notched the game-winner while Andrew Gordon scored against his former team for the third consecutive game and moved into a tie with Nick Cousins for the team lead in goals with his 13th marker this season. Martin Ouellette backstopped Lehigh Valley to its 20th win of the season with 23 saves on 26 St. John’s shots.

Service Electric’s TV2 Sports will be broadcasting live all of the Phantoms’ 19 remaining regular season home games. If you can’t make it out to the rink, be sure to catch all the exciting action in high definition with Steve Degler and former Flyers and Phantoms goaltender Brian Boucher! And don’t miss “Phantoms – Breaking the Ice” every Monday from 7:00 – 8:00 PM throughout the season live at Chickie’s & Pete’s (701 Hamilton Street)!

Tickets for all of the Phantoms’ 19 remaining regular season home games are available now at the Mealey’s Furniture Box Office at PPL Center (7th & Hamilton), by calling 610-347-TIXX (8499) or online at pplcenter.com.