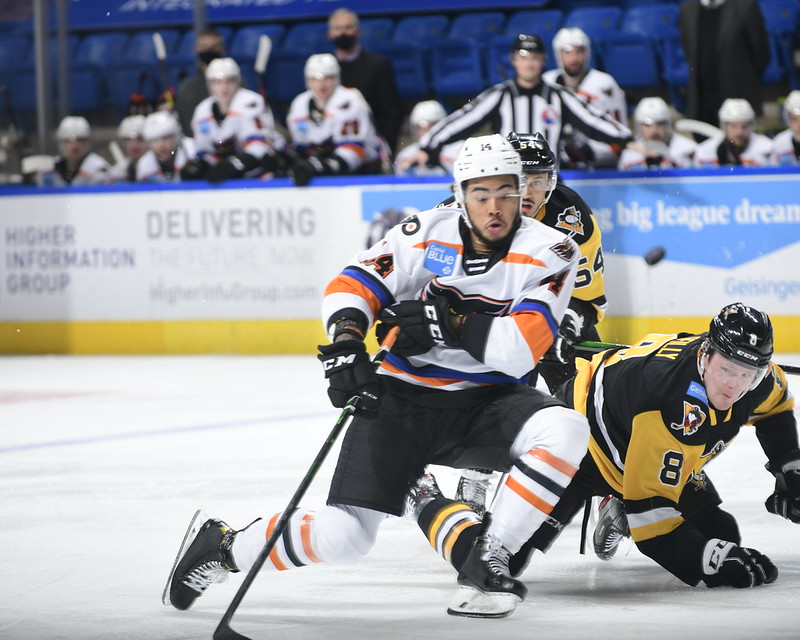 Wilkes-Barre, PA – Zayde Wisdom (5th) and Max Willman (4th) boosted their team-leading goal totals but the Lehigh Valley Phantoms finally fell from the ranks of the unbeaten in a 4-2 loss at the Wilkes-Barre/Scranton Penguins on Friday evening.

Lehigh Valley (4-1-1) had its franchise-record longest point-streak to start a season snapped at five. 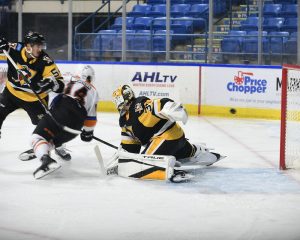 Rookie forward sensation Zayde Wisdom displayed his strength and ingenuity with his incredible, highlight-reel goal in the opening minutes of the second period. While being hauled-down when attempting to get past for a breakaway, Wisdom muscled his way forward while maintaining possession of the puck. As he was blasted by another Penguins player and facing away from the net he was able to elevate a backhander from the left side of the crease past a sprawled Max Lagace for an impressive tally that cut the Penguins’ advantage to 2-1 at the time. Wisdom has scored his five goals in the last four games.

Max Willman’s goal came in the early minutes of the third period with the team trailing 4-1 when Chris Mueller wheeled in the left-wing corner with a centering pass that bounced off a Penguins’ defender’s leg and perfectly onto the stick of Willman who quickly buried his opportunity. The 26-year-old from Barnstable, Mass. is on a three-game goal streak with four goals in his hot stretch.

But the Phantoms could get no closer as Wilkes-Barre/Scranton (3-2-1) knocked off an undefeated team by a 4-2 score in a second consecutive outing having done the exact same thing to Hershey on Wednesday night. 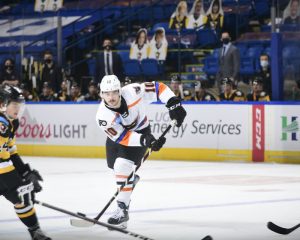 Wilkes-Barre/Scranton struck early on a point-shot by defenseman Will Reilly (2nd) that beat a screened Zane McIntyre for a 1-0 lead at 2:38 into the first period. The Phantoms out shot the Penguins in the opening frame 11-4 but failed to cash in when they had a 5-on-3 power play for the last 48 seconds of the first period.

Jon Lizotte scored his first in two years on a low wrister from the right dot staring down McIntyre one-on-one for a five-hole goal that pushed the Phantoms ahead 2-0. But that lead lasted only 20 seconds before Wisdom’s wizardry went on display to cut the lead to 2-1.

Lizotte was on the left point when he set up Jan Drozg with a deflection goal at 12:53 of the second period pushing the Penguins ahead 3-1. 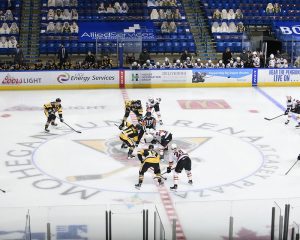 Felix Robert scored his first as a pro when he swooped out to the left circle and beat McIntyre on the short side to the upper-left corner for a 4-1 lead before Willman would respond about a minute later. Max Willman had a couple more speedy entries after that in efforts to cut into the lead further including a near breakaway when he sped past a defenseman, turned the corner and barreled into Lagace on one of the best chances the Phantoms had to cut the deficit to one. But the Penguins hung on from there against the last remaining unbeaten in the Eastern Conference.

The Phantoms and Penguins will rematch on Saturday at 7:05 p.m. at PPL Center. Lehigh Valley is also at home next Wednesday evening against the Hershey Bears.