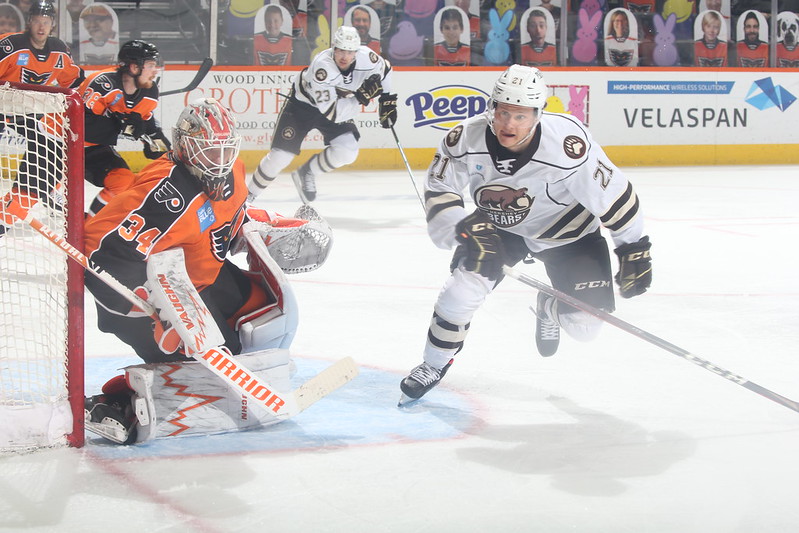 Lehigh Valley, PA – A great start for the Phantoms did not result in goal-production in the first period allowing the Hershey Bears time to find their game in a 6-2 decision on Wednesday night at PPL Center. Philippe Maillet led the Bears’ attack with five assists while Zayde Wisdom (7th) and Ryan Fitzgerald (6th) scored goals for the Phantoms and Derrick Pouliot added a pair of helpers.

Lehigh Valley (8-3-2) took its first regulation loss at home this year (3-1-1 at PPL Center) and lost for the first time since March 6 at Hershey. The Bears defeated the Phantoms for just the second time in six tries in the rivalry series. 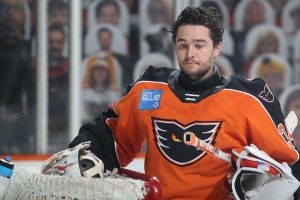 The Phantoms racked up 10 shots on goal in the first period and had three power plays while Hershey generated very few chances and had only three shots on goal. Wade Allison hit the post on the team’s second power play of the game and Egor Zamula raced through the defense on a breakaway and then was awarded the team’s first penalty shot of the year. But the Phantoms were unable to capitalize despite the advantageous opportunities.

At the end of the period, Linus Sandin had a tight wrap-around try and Chris Mueller was digging at the net-front but Lehigh Valley still couldn’t put one past Pheonix Copley in net for the Bears.

The game remained scoreless past the midway point of the second before Hershey exploded for four straight. Shane Gersich (2nd) and Martin Fehervary connected on a 2-on-2 shorthanded push at 10:18 of the second for the game’s first goal.
Defenseman Paul LaDue (2nd) scored from the blue-line on a shot that the Phantoms contended had been touched with a high stick. His goal at 11:06 pushed the lead to 2-0. Joe Snively buried his chance on the rebound of a Philippe Maillet shot on the power play for a 3-0 lead at 13:40. It was Hershey’s first power-paly goal against the Phantom in 17 tries. Brian Pinho (1st) weaved in with Maillet for a chip in the slot on a pass from the left wing at 16:07 to push the lead to 4-0.

Lehigh Valley tallied at the very end of the second period on the power play with Ryan Fitzgerald’s conversion in the low slot set up by Derrick Pouliot and Cal O’Reilly with just 1.4 seconds left in the second. O’Reilly recorded his 492nd career assist in the AHL on the play. 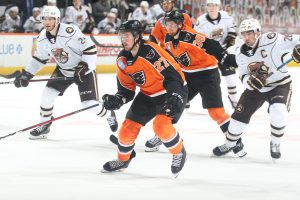 With the team down 3-0, Garrett Wilson squared off against Hershey’s tough-guy, Kale Kessy, in the first fight at PPL Center this year. Both combatants had a good scrap and landed a couple throws before Wilson scored the take-down of Kessy at the end.
Matt Moulson scored early in the third period at 4:16 for his fourth of the season to extend the lead to 5-1 but the Phantoms quickly responded on Zayde Wisdom’s deflection goal in the slot, again on the power play, tipping a Pouliot point-shot.
Lehigh Valley pulled Alex Lyon with 5:40 remaining in efforts to cut into the three-goal deficit. The Phantoms maintained possession pretty much the whole time and generated a few decent chances as well but the Bears held tough and eventually Pinho put the game on ice with his empty-netter with 27 seconds remaining for the 6-2 final margin.

The Phantoms return to action this Friday and Saturday nights with a home-and-home series against the Binghamton Devils including an away game on Friday in Newark followed by a return to PPL Center on Saturday in a rematch with the Devils on Saturday. That begins a stretch of three straight home games for the Phantoms including contests on Wednesday, March 31 and Saturday, April 3.

Tickets for all Phantoms home games are available and on sale to the general public at PhantomsHockey.com and PPLCenter.com