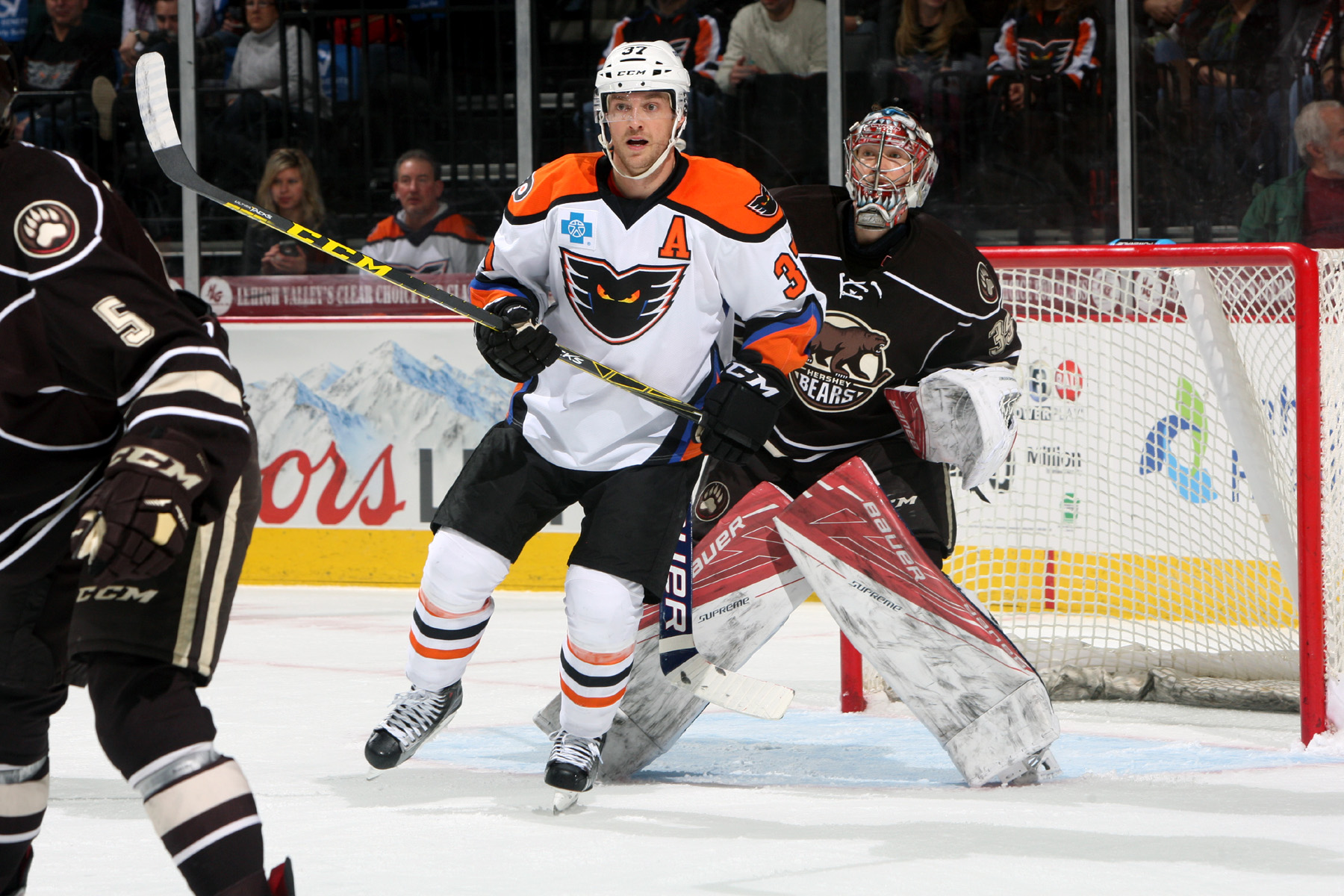 Final Meeting with Hershey in Lehigh Valley Goes to Bears

Lehigh Valley, PA – The Lehigh Valley Phantoms saw their sellout streak reach a season-high nine straight games Wednesday evening as 8,433 raucous fans poured into PPL Center to watch the final regular season meeting in downtown Allentown this year between the Phantoms and their in-state rivals, the Hershey Bears. Hershey used a four-goal outburst in the final five minutes of the second period to help capture an 8-0 win inside PPL Center.

Despite the setback, the Phantoms still have the edge in the season series having claimed six of 11 total meetings and four of the last seven collisions. The Phantoms and Bears will face off for the final time this regular season on Saturday, April 16 at Giant Center in Hershey.

With Wednesday’s capacity crowd, Lehigh Valley has now enjoyed 20 standing room-only sellouts overall this season and 41 total regular season sellouts since PPL Center opened its doors in the Fall of 2014.

Dan Ellis earned the victory in goal for the Bears with 21 saves while Martin Ouellette and Connor Knapp combined for 25 saves between the pipes for Lehigh Valley.

Hershey opened the scoring just over six minutes into the rivalry showdown when, while on the power play, Boyd drifted a pass to the high slot that was promptly blasted home by Bourque for his 27th goal of the season. Walker collected the secondary assist on the man-advantage marker netted 6:19 into the first period.

The Bears doubled their advantage a little over three minutes later when Mike Moore dipped into the slot before sliding in his fifth goal of the season and fourth conversion in 10 head-to-head showdowns with the Phantoms. Bourque and Barber assisted on the even-strength strike scored 9:44 into the opening period.

Hershey then extended its lead to a 3-0 advantage exactly 12 minutes into the period when Dustin Gazley deftly shifted from the backhand to the forehand atop the goal crease before sending home his 14th goal of the season. Walker and Ryan Bourque assisted on the five-on-five conversion, which prompted a change in goal for the Phantoms as Knapp replaced starter Ouellette between the pipes.

Despite the deficit, the Phantoms came out with an abundance of energy in the second period and generated some glorious scoring opportunities as they battled to dent Hershey’s advantage. First, Taylor Leier, who leads Lehigh Valley with two shorthanded goals this season, darted free on a shorthanded breakaway before Bears goaltender answered his bid with the right pad. Then, during the Phantoms’ first power play of the night, Adam Comrie stepped into a loose puck in the slot as he launched a sizzling slap shot off the post.

As Lehigh Valley couldn’t get any puck luck at one end, Hershey seemed to get nothing but on the other side as the Bears were able to convert four times in the final five minutes of the middle stanza.

First, Boyd chipped in his 19th goal of the season 15:11 into the second period with assists from Barber and Burgdoerfer. Then, Hershey combined for a pair of goals just 19 seconds apart when Burgdoerfer landed his sixth goal of the year 17:00 into the middle frame before Walker netted his 16th tally of the season at the 17:19 mark. The Bears capped their second-period offensive outburst 18:59 into the middle frame when Chris Bourque notched his second goal of the game and team-leading 28th conversion from Bowey and Ryan Stanton.

Hershey landed its final conversion of the night less than five minutes into the final period when Jakub Vrana notched his 11th goal of the season. The unassisted, even-strength strike came 4:51 into the third frame.

The Phantoms continue their four-game home stand with a pair of tilts at PPL Center this weekend. First, on Friday, March 25, the Providence Bruins, the AHL affiliate of the Boston Bruins, visit downtown Allentown for the final time this season. Friday’s game features a special visit from Philadelphia Flyers legend and two-time Stanley Cup champion Dave Schultz who will be signing autographs and visiting with fans from 6:00 – 6:45 p.m. behind Section 103. Then, on Saturday, March 26, it’s Fan Appreciation Night at PPL Center as the Phantoms host the Hartford Wolf Pack, the AHL affiliate of the New York Rangers. Loads of prizes will be given away throughout the game in celebration of the best fans in hockey.