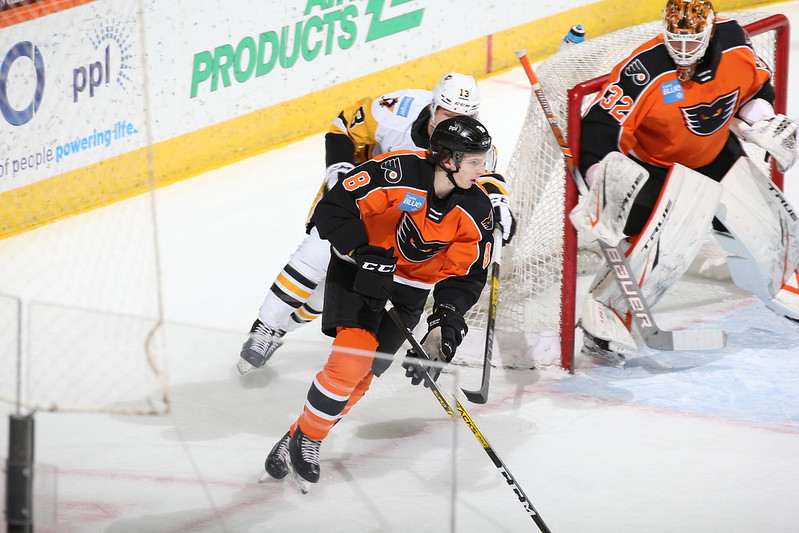 Lehigh Valley, PA – Another goal from Zayde Wisdom (6th) with just 3:06 remaining forced overtime but the Wilkes-barre/Scranton Penguins pushed through for the extra standings point on a winner by Frederick Gaudreau (1st) on Saturday night at PPL Center.

Max Willman (5th, 6th) extended his goal-streak to four games and Ryan Fitzgerald (3rd) added a power-play marker as well. Mason Millman notched a pair of assists for his professional points and Cal O’Reilly added a couple more helpers to his team-leading total of six.

Lehigh Valley (4-1-2) played to overtime on a fifth occasion in seven games this season and is now 5-2 in extra hockey frames. All five regulation ties have been decided in overtime with none of the games going to a shootout. 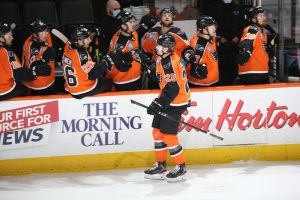 The Phantoms and Penguins traded leads and comebacks throughout the night.  The Penguins held leads of 1-0 and 2-1 before the Phantoms surged in front 3-2 only to see the Penguins take control again at 4-3. Lehigh Valley had rallied from behind in the third in each of its previous three overtime wins but couldn’t make it 4-for-4 on that count following Wisdom’s tying goal. It is the second time this season Wisdom has scored a tying goal in the third period. And it was Wisdom himself who was inducing the penalties that gave the Phantoms the power play.

Zayde Wisdom and Max Willman have moved into a tie for the league lead for most goals by a rookie along with Seth Jarvis of the Chicago Wolves. At 26 years old, Willman is still considered a rookie because he did not meet the threshold of 25 AHL games last season. Willman’s four-game goal-streak is tied for the longest in the AHL this season with Seth Jarvis of Chicago.

With two assists, Cal O’Reilly leads the team with six this season and has 490 career assists moving him 10 away from becoming just the tenth in AHL history to reach the 500 assist milestone. O’Reilly’s 616 points is tops among all active AHL players and ranks 43rd in AHL history.

One Felix beat another Felix to start the game and the goal-scoring frenzy was off and running from there. Felix Robert (2nd) shot to the far post past the stick-side of Sandstrom for a 1-0 lead for the Penguins. 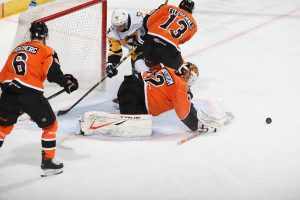 Wisdom showed off his passing prowess on the first goal by Willman with a nifty backhand flick from behind his back on the right boards that connected in the slot with Willman who buried his opportunity at 13:40 of the first period.

Wilkes-Barre/Scranton (4-2-1) retook the lead early in the second period with Jordy Bellerive (3rd) finishing a 2-on-2. But the Phantoms were quick to respond again about three minutes later when Max Willman’s shot in the slot bounced off a Penguins defenseman’s leg and trickled through goalie Shane Starrett for a 2-2 tie.

The Phantoms converted their first of two power-play goals on the night with Ryan Fitzgerald muscling the puck up along the left boards to receive it back from Cal O’Reilly beneath the goal-line. Fitzgerald maneuvered the puck to his backhand to knock the puck past Starrett’s stick-side on the short side for the Phantoms first lead of the night at 3-2.

Nick Schilkey (2nd) deflected a point shot from Billy Sweezey right off a faceoff win by Frederick Gaudreau for a 3-3 tie again on a change-of-direction that would have likely been perfect to beat almost any goalie.

Sam Miletic (1) scored in the opening seconds of the third period to put the Penguins back ahead at 4-3. A centering pass from way over in the corner was broken up by Sandstrom away from Jordy Bellerive on the doorstep but Miletic was lurking in the area also to convert on the chance. 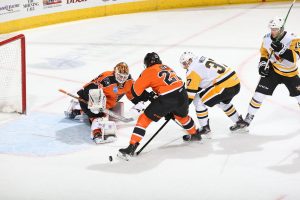 The Phantoms second consecutive power-play in the third period ultimately earned them a standings point with Ryan Fitzgerald perhaps convincing the Penguins he was about to shoot as he cut in from the left circle after an interception. but he spotted Wisdom open on the other side of the slow and left it right on the tape for the 18-year-old rookie to find the back of the net again thus forcing overtime.

Frederick Gaudreau intercepted a drop in the Phantoms zone that turned into a 2-on-1. The 27-year-old veteran kept the puck himself and fired the winner off the glove of Sandstrom.

The Phantoms return to PPL Center on Wednesday night hosting the Hershey Bears. at 7:05 p.m. before starting a stretch of three consecutive away games with a Saturday afternoon excursion to Hershey.