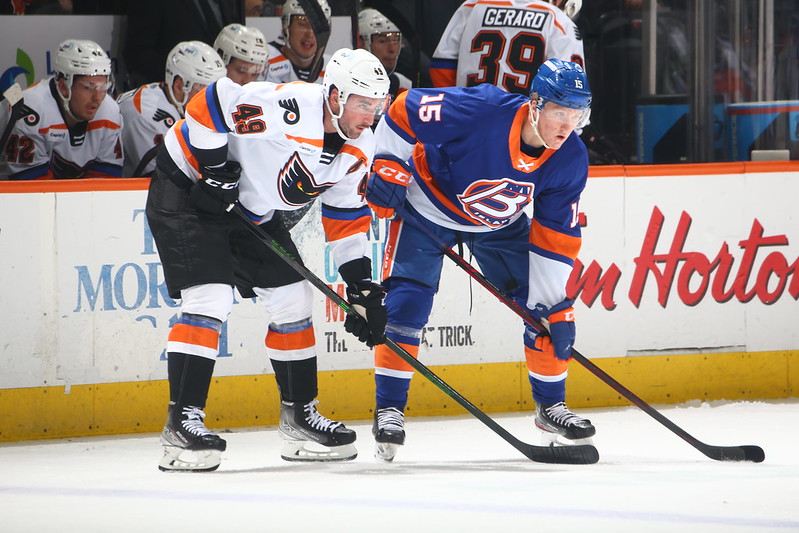 Lehigh Valley, PA – On Hockey Fights Cancer Night at PPL Center, the Bridgeport Islanders withstood a ferocious Phantoms’ push in the third period to hold on for a 4-1 victory on Saturday. Lehigh Valley challenged 35-year-old veteran goalie Cory Schneider with a barrage of shots and quality attempts in the final frame while trailing 2-1 but just missed burying the equalizer. The Islanders eventually scored a pair of empty netters in the last two minutes to put the game out of reach.

Cal O’Reilly (3rd) struck first for the Phantoms on a terrific tip on the backdoor on the power play after back-and-forth cross-ice passes whipped across by Gerry Mayhew and Jackson Cates. Cates pass from the left-wing perfectly connected with O’Reilly who just did have enough reach to leave his stick in front of the net to knock it in while sacrificing himself on a hard crash into the end-boards on the play.

The impressive vision from Cates resulted in his third consecutive game with an assist after the Minnesota-Duluth product had gone the first 14 games without registering a single helper.

Big Jon Gillies made his Phantoms debut in net and dazzled the crowd with some impressive saves as well. Forward Nick Master made his AHL debut in an exciting moment for the Broomall, Pa. native out of La Salle College High School.

The Phantoms were without defenseman Cam York who missed the game due to COVID-19 protocols.

Bridgeport put its foot on the gas after the Phantoms struck on that power play 12 minutes into the contest. Austin Czarnik scored the first of his two-goals on a three-point night with a power-play conversion for a 1-1 tie at the first intermission.

Paul Thompson from the left boards attempted to connect with a teammae on the backdoor somewhat similar to how Cates found O’Reilly in the first period. But Thompson’s effort deflected off a Phantom and into the net for the go-ahead score just four minutes into the second period.

Lehigh Valley’s penalty kill came up with some huge stops for much of the second period while Bridgeport had three power plays.

And then came the third period. The Phantoms buzzed and created in the Islanders’ zone in a frenetic push to even the score. Former New Jersey Devils and Vancouver Cancucks goalie Cory Schneider showed some of his NHL talent on more than one occasion in denying each of the Phantoms 12 shots in the third period. Austin Czarnik and Simon Holmstrom put the game away with two empty-net goals for the 4-1 final.

Lehigh Valley’s next game was scheduled to take place Sunday at the Hershey Bears but that game has been postponed due to AHL COVID-19 protocols as has the Phantoms’ next scheduled home game on Wednesday, December 1 also against Hershey. Fans with tickets for the Wednesday game should hang onto their tickets which will be good for the rescheduled date.

The Phantoms return to PPL Center on Friday, December 3 to take on the Charlotte Checkers at 7:05 p.m on WFMZ-69 Coat Drive Night. Tickets are available at PPLCenter.com