Overtime Thriller for the Fans at PPL Center 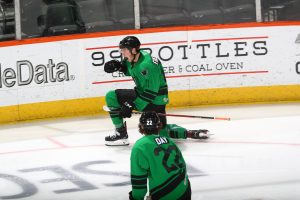 Wednesday, March 17, 2021
Lehigh Valley vs. Binghamton (Postponed)
The Phantoms and Devils were postponed due to league COVID protocols. The make-up date for this game has not been announced.

Friday, March 19, 2021
Lehigh Valley at Wilkes-Barre/Scranton (Postponed)
The Phantoms at Penguins were postponed due to league COVID protocols. The make-up date for this game has not been announced.

Sunday, March 21, 2021
Lehigh Valley 5 – Wilkes-Barre/Scranton 4 (OT)
Tanner Laczynski scored a pair of goals, the first of his professional career, to tie the game in the third and then win the game in overtime. Fellow rookies Wade Allison and Tyson Foerster both scored for a second consecutive game while 35-year-old veteran Chris Mueller contributed his 243rd career goal, most among active players in the American Hockey League. The Phantoms recorded their league-leading fifth overtime victory of the season. It was the first game at PPL Center with more fans at 15% capacity. For many of those attending the entertaining track-meet, it was their first live game in over a year. 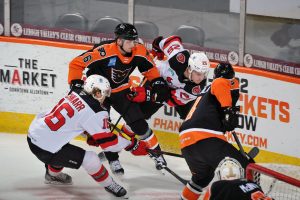 Wednesday, March 24, 2021, 7:05 p.m.  – PPL Center, Allentown PA
Lehigh Valley Phantoms (8-2-2) at Hershey Bears (8-4-2)
The Phantoms are 4-1-0 against Hershey this season and 1-0-0 at PPL Center. Hershey is 7-2-2 against the rest of the AHL but just 1-2-2 against the Phantoms. David Kase has scored 1-4-5 vs. Hershey. Zayde Wisdom, Ryan Fitzgerald and Derrick Pouliot have two goals each against the Bears. Pouliot scored the game-winner against Hershey on March 3 at PPL Center with just 5:59 left in the third. Lehigh Valley’s penalty kill is a perfect 15-for-15 vs. Hershey. Capitals first-rounder Connor McMichael scored a late tying goal with 54 seconds remaining and then a buzzer-beating overtime winner with just 0.5 seconds left in a Sunday comeback rally against the Binghamton Devils.

Friday, March 26, 2021, 7:05 p.m. – Newark, NJ
Lehigh Valley Phantoms (8-2-2) at Binghamton Devils (3-5-4)
The Phantoms are 2-0-1 vs. Binghamton this season. This is Game 4 of 14 between the two teams and the opener of a home-and-home weekend series. The Devils ended an eight-game winless slide on Friday with a wild comeback against Hershey. Trailing 4-1 in the second and right after a timeout they scored three straight to forge a 4-4 tie by the intermission and carried momentum to the finish in a 6-5 triumph.

Saturday, March 27, 2021, 7:05 p.m. – PPL Center, Allentown, PA
Lehigh Valley Phantoms (8-2-2) vs. Binghamton Devils (3-5-4)
The Phantoms and Devils rematch at PPL Center in the finale of the home-and-home weekend series. The Devils lost in their only appearance at PPL Center on February 20 by a 3-0 score on a Zane McIntyre shutout in Lehigh Valley’s home opener. Max Willman has scored half of his six goals against the Devils including an overtime winner in Newark on February 24. Popular Phantoms’ alum Danick Martel is second on the team with five goals. 34-year-old veteran captain Ben Street has five goals. Former Tampa Bay first-rounder Nolan Foote, son of former Colorado Avalanche Adam Foote, has four goals and seven assists. 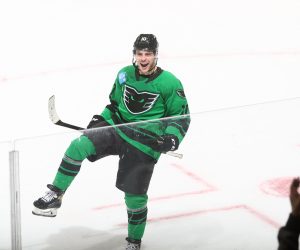 Living it Up with Laczynski
Tanner Laczynski scored his first two goals on Sunday with a tying tally in the third followed by the winning strike in overtime against the Penguins. The 23-year-old rookie out of Ohio State continues to impress with his steady and smart play and is now reaping the benefits of his hard work. Laczynski was a round 6 selection of the Flyers in 2016. 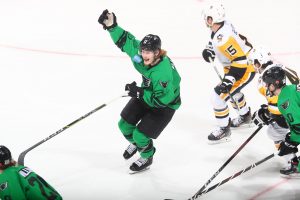 Allison Keeps Sniping
Hard-Shooting Wade Allison possesses an NHL-caliber shot and hasn’t been bashful about showing it off in his first two pro games with a pair of snipes to begin his pro career. The Flyers round 2 selection in 2017 out of Western Michigan University had a delayed start to his pro career following an ankle injury that required surgery during training camp in January. 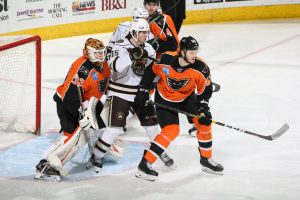 Killin’ It!
The Phantoms have the top penalty kill in the AHL with a 91.4% success rate (32-for-35) through the season’s first 12 games. Lehigh Valley’s P.K. was strong out of the gates giving up just 1 out of 27 to open the season. The Phantoms have been especially strong against Hershey holding the Bears to 0-for-15 this season.