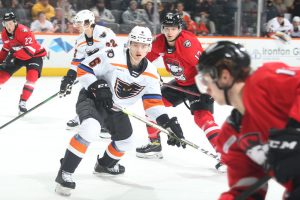 Weekly Recap
Friday, Dec. 3
Charlotte Checkers 5 – Phantoms 3
Charlie Gerard hit the post on a breakaway with 2:28 on what would have been the tying goal and the Checkers escaped with a 5-3 victory at PPL Center. Near the beginning of the game, the Phantoms hit the post thre times in a row in about 15 seconds during a 5-on-3 power play. Adam Clendening scored in the first period to give the Phantoms a 1-0 lead but the Checkers surged back. 29-year-old forward Nick Lappin scored his first goal as a Phantom after joining the team a couple weeks ago.
The Phantoms received almost 1,300 coats in our annual WFMZ-69 Coat Drive to benefit the Salvation Army. Thank you, Fans!!

Upcoming
Friday, December 10, 7:05 – Phantoms at Hartford Wolf Pack
The Phantoms make their first visit to Hartford, Conn. to take on the Wolf Pack, AHL affiliate of the New York Rangers. Hartford had their games postponed last week due to AHL COVID-19 protocols. The Wolf Pack are 12-4-2 and are led by Jonny Brodzinski who has scored 7-11-18. He is the older brother of a possible future Phantom in Flyers’ 2019 seventh-rounder Bryce Brodzinski who is currently a junior at the University of Minnesota. 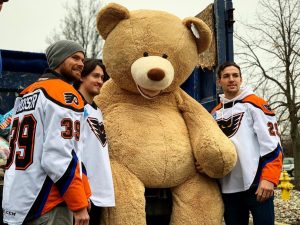 Saturday, December 11, 7:05 – Cleveland Monsters at Phantoms
– Teddy Bear Toss Night
– Saturday Night Hockey Live with UUU in concert
Get ready to throw those bears!! It’s the annual Teddy Bear Toss Night presented by Dan’s Camera City to benefit area kids at Valley Youth House. Fans will throw thousands of stuffed animals onto the ice after the Phantoms score their first goal. The Monsters enter the week at 9-6-5. The AHL affiliate of the Columbus Blue Jackets is led by Jake Christansen who has scored 5-13-18. Phantoms alum J-F Berube is back with Cleveland. He gave up the Teddy Bear Toss goal at PPL Center three years ago!

Sunday, December 12, 3:05 – Hartford Wolf Pack at Phantoms
The Phantoms and Wolf Pack rematch at PPL Center in a Sunday matinee. The Phantoms have not seen the Pack since the team’s Opening Night on October 23 when Hartford snagged a 3-1 decision.

Schedule Adjustments:
The Phantoms had three postponed games recently on November 28 at Hershey, December 1 at home and December 4 at home. All of the games were postponed due to AHL COVID-19 protocols affecting the Hershey Bears.
The game of December 1 will now be played on Tuesday, December 21 at PPL Center. Tickets for the December 1 game will automatically be valid for the December 21 contest.
New dates for the other postponed games will be announced soon.
Fans with questions or needing ticket exchanges are encouraged to contact our staff via email ticketsales@phantomshockey.com 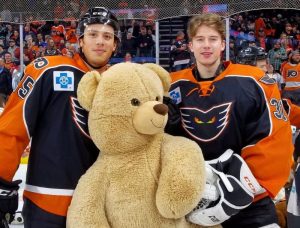