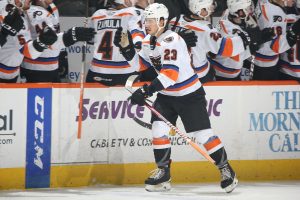 Friday, February 4, 2022
Phantoms 5 – Providence Bruins 1
The Phantoms made it look easy in their rout of the P-Bruins to conclude the official first-half of the season. Hayden Hodgson scored a pair of goals and defenseman Wyatte Wylie had his second three-point game in less than a month with one goal and two assists. Felix Sandstrom was strong in net with 25 saves. Morgan Frost and Cam York made their returns to the Phantoms for their first AHL games in several weeks. Frost had a goal and an assist. 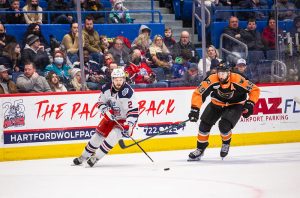 Saturday, February 5, 2022
Hartford Wolf Pack 6 – Phantoms 4
Lehigh Valley raced out to a 2-0 lead in the first on goals for Hayden Hodgson and Charlie Gerard. But the first-place Wolf Pack stormed back with five goals in the second period and never looked back. Wyatte Wylie scored his second goal of the weekend. The Phantoms allowed two shorthanded goals in the setback.

Friday, February 11 (7:05) – Phantoms vs. Hershey Bears (PPL CENTER)
The Hershey Bears (23-13-6) are knocking on the door for first place in the Atlantic and trail Hartford by only a few percentage points. Lehigh Valley rallied in the last meeting for a 3-2 win on January 30 on Cal O’Reilly’s pair of shorthanded goals and Linus Sandin’s late game-winner. The Phantoms are 3-1-1 against Hershey entering Game 6 out of 14 in the rivalry series.

Saturday, February 12 (7:05) – Phantoms vs. Wilkes-Barre/Scranton Penguins (PPL CENTER)
Wilkes-Barre/Scranton (18-17-5) is red-hot and on a five-game point streak (4-0-1) and with points in 8 of the last 9 (7-1-1). It’s been quite a turnaround for the Penguins who had dropped 8 straight through mid-January but have gone 9-2-1 since then. Goalie Alex D’Orio has been a rock going 6-2-1, 1.99, .926 in the hot streak. Valtteri Puustinen leads the team with 27 points but has since headed up to Pittsburgh. Former Buffalo first-rounder Alexander Nylander has thrived since arriving a little over a month ago in a trade with Chicago scoring 7-6-13 in 16 games with his new team in Wilkes-Barre. The Phantoms are 3-3-1 against Wilkes-Barre/Scranton. 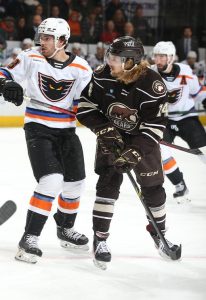 Sunday, February 13 (2:05) – Phantoms vs. Hershey Bears (PPL CENTER)
Lehigh Valley and Hershey rematch at PPL Center for an early matinee contest on Super Bowl Sunday. This is Game 7 out of 14 between the two rivals. Hershey had a pair of 4-1 wins at Cleveland last weekend. Axel Jonsson-Fjallby leads active Hershey skaters with 13-16-29. Popular Phantoms’ alum Mike Vecchione has 10 goals including 7 in the last 12 games. Vecchione initially had been credited with a two-goal game at PPL Center on January 30 but a late scoring decision determined he did not tip on of the shots and thus he actually only had one goal in that contest.

News and Notes:
– Lehigh Valley has gone 12-5-3 in its last 20 games after a beginning that saw just three wins in the first 19 games at 3-11-5.
-Adam Clendening is projected to play his 500th pro game on Saturday.
– Hayden Hodgson scored three goals last weekend to take the team lead with 12. He has scored two goals in a game three times this season.
– The Phantoms have points in 8 of their last 9 home games (6-1-2)
– Lehigh Valley’s six-game homestand is their longest stretch of consecutive home games this season.