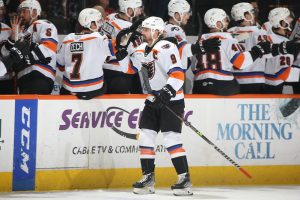 Friday, January 28, 2022
Springfield Thunderbirds 6 – Phantoms 2
The Phantoms had nowhere to go but up after giving up five goals in the first period of the weekend. Nathan Walker’s natural hat trick powered Springfield’s win. Garrett Wilson and Nick Lappin scored for the Phantoms.

Saturday, January 39, 2022
Phantoms 4 – Hartford Wolf Pack 0
Pat Nagle notched his first career AHL shutout with 26 saves in his final game with the Phantoms before departing for three weeks for the Olympics with the United States team. The Phantoms knocked off the Wolf Pack out of first place and improved to 3-1-0 against Hartford. Lehigh Valley raced out to a 3-0 lead in the first period on goals by Hayden Hodson, Wyatte Wylie and Alex Kile. Garrett Wilson also added his team-leading 10th goal of the season. The Phantoms finished their five-game road trip with a 3-2-0 record. 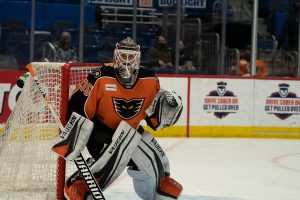 Sunday, January 30, 2022
Phantoms 3 – Hershey Bears 2
Phantoms captain Cal O’Reilly tied a franchise record with two shorthanded goals as Lehigh Valley rallied in the third period for an exciting comeback win in the team’s return to PPL Center. Linus Sandin scored the winner with just 5:34 left barely more than two minutes after his flip from the right boards set up O’Reilly’s tying marker on a shorthanded breakaway.  Phantoms alum Mike Vecchione scored both goals for Hershey. Lehigh Valley improved to 3-1-1 against Hershey as they knocked off the division’s first place team for a second consecutive night. The Phantoms reached .500 for the first time this season at 14-14-8.

Upcoming
Wednesday, February 2 (10:30 a.m.) – Phantoms at Bridgeport Islanders
Lehigh Valley (14-14-8) travels to Bridgeport for a morning start on a special Kids’ Schoolday event in the team’s first visit to Webster Bank Arena. The Phantoms are 1-1-0 against Bridgeport including a New Years’ Day win at PPL Center on Adam Clendening’s overtime goal in a 2-1 victory. Bridgeport (15-18-8) is in last place in the Atlantic Division. They are led by veteran Chris Terry (13-17-30) nd prospect Otto Koivula (9-20-29). Phantoms alums Andy Andreoff (7-12-19) and Cole Bardreau (7-6-13) are also among the team’s leaders.

Friday, February 4 (7:05) – Phantoms vs. Providence Bruins (PPL CENTER)
The Providence Bruins (17-11-6) travel to Allentown for the first time this season having dropped their last three straight. Lehigh Valley lost at Providence 6-3 in November in the only previous matchup. Former Hartford Wolf Pack Steven Fogarty (8-15-23) leads the Bruins in scoring. Zach Senyshyn (11-9-20) had a hat trick against the Phantoms in November. Veteran goalie Troy Grosenick (8-2-1, 2.28, .917) is fifth in the AHL in GAA.

Saturday, February 5 (5:00) – Phantoms vs. Hartford Wolf Pack
The Phantoms shall again sojourn to the Nutmeg State, this time for a rematch with the Wolf Pack. Lehigh Valley is 3-1-0 against Hartford including 2-0-0 at XL Center where Pat Nagle had a 26-save shutout in a 4-0 win last Saturday. Hartford was missing several of its top players in the last matchup but some of those players may return from the New York Rangers’ Taxi Squad in time for the rematch. Keith Kinkaid (14-2-2, 2.55, .913) is among the top goalies in the AHL and leads the Eastern Conference in wins.

News and Notes:
– Lehigh Valley is 2-1-0 all-time in morning games including a 4-2 win at Bridgeport on November 8, 2017 and a 4-0 shutout win for Anthony Stolarz at Hartford on November 2, 2016. The Phantoms lost in their most recent morning game, 2-1, on November 18, 2019 at Springfield.
– Cal O’Reilly’s two shorthanded goals on Sunday tied a franchise record. The only other player to accomplish the feat was Jason Akeson who scored two shorthanded goals for the Adirondack Phantoms on March 21, 2014 at the Utica Comets.
– Lehigh Valley has gone 11-3-3 in its last 17 games after a beginning that saw just three wins in the first 19 games at 3-11-5.
– Linus Sandin is on a three-game point streak (1-3-4) since his return to the Phantoms after making his NHL debut last week.
– Cal O’Reilly has 15 points (5-10-15) in his last 11 games including five multi-point games in that stretch.
– Defenseman Adam Clendening has 12 points (2-10-12) in his last 12 games including four multi-point games in the last nine.
– 11 Phantoms players this season have also suited up for the Philadelphia Flyers: Wade Allison, Connor Bunnaman, Jackson Cates, Morgan Frost, Gerry Mayhew, Isaac Ratcliffe, Linus Sandin, Felix Sandstrom, Max Willman, Cam York, Egor Zamula 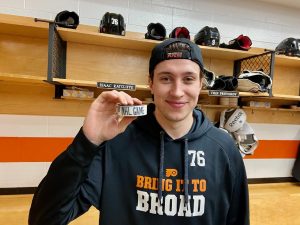 NHL DEBUTS
– Isaac Ratcliffe made his NHL debut last Saturday in Philadelphia’s streak-busting overtime win against the Los Angeles Kings. He became the 35th all-time Lehigh Valley player to make his Flyers’ and NHL debut after starting his pro career with the Phantoms.
– Linus Sandin made his Flyers’ debut last Tuesday. He had scored five goals in the previous seven games before receiving his first NHL opportunity.

OLYMPICS HONOR
Goalie Pat Nagle will represent the Red, White and Blue at the 2022 Winter Olympics in China and will be away from the Phantoms for the next three weeks. The 34-year-old veteran goalie recorded his first-ever AHL shutout on Saturday at Hartford before departing for Los Angeles and eventually Beijing. Nagle has spent most of his career as one of the all-time greats in the ECHL. He is  7-0-3, 2.37, .911 with the Phantoms this season.