Lehigh Valley, PA – The Lehigh Valley Phantoms opened the season with a heartstopping win as an exciting lead-up to their home Opening Weekend coming up at PPL Center.
Lehigh Valley (1-1-0) has a pair of games against the Cleveland Monsters (2-0-0) on Saturday at 7:05 p.m. and Sunday at 3:05 p.m. on a weekend that will include a Rally Towel Giveaway, T-Shirt Throwing Manic Cameron Hughes on Saturday, and Postgame photos with the players on Sunday. 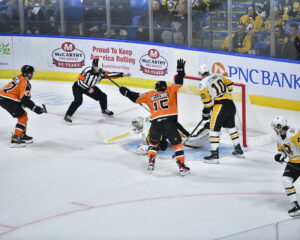 Saturday, October 15, 2022
Phantoms 3 – Wilkes-Barre/Scranton Penguins 2 (OT)
Talk about waiting for the last second. Louie Belpedio scored the overtime winner with just 1.4 seconds remaining on Wilkes-Barre/Scranton’s Opening Night. Elliot Desnoyers scored the first goal of the season and also his career first in his pro debut. Zack MacEwen added a goal and an assist. Veteran goalie Troy Grosenick was outstanding in the W with 38 saves.

Sunday, October 16, 2022
Hershey Bears 2 – Lehigh Valley Phantoms 1
Elliot Desnoyers made it back-to-back as he scored again in his second pro game and Sam Ersson was terrific with 26 saves but the Hershey Bears hung on for a 2-1 decision on Sunday afternoon. Mike Sgarbossa scored the winning goal for the Bears midway through the third period in Round 1 out of 14 in the season rivalry series. 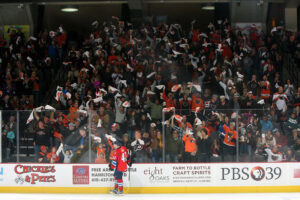 Upcoming
Saturday, October 22 at 7:05 p.m.
Sunday, October 23 at 3:05 p.m.
Phantoms vs. Cleveland Monsters
Opening Weekend arrives at PPL Center with a pair of games against the Cleveland Monsters (2-0-0). The AHL affiliate of the Columbus Blue Jackets won a pair of high-scoring shootout contests over the Syracuse Crunch last week, 6-5 and 5-4. Round 2 pick in 2018 Kirill Marchenko leads the Monsters with 3 goals. Jet Greaves picked up both wins in the crease. He is former teammates with Tyson Foerster on the Barrie Colts in the OHL. Trent Vogelhuber is the new head coach of the Monsters. 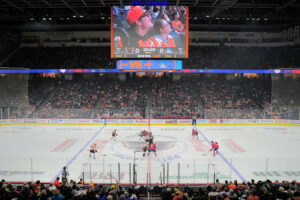 PHANTASTIC!
– Louis Belpedio set a new Phantoms record for scoring an overtime goal with the least time remaining. His winner on Saturday at Wilkes-Barre came with just 1.4 seconds showing on the clock. The old record was Danny Syvret’s overtime goal for the Adirondack Phantoms with 1.6 seconds left against the Springfield Falcons on December 6, 2009.
– Cal O’Reilly has 535 career assists in the AHL which is 8th all-time in AHL history. His 827 career games in the AHL rates 32nd all-time. Next up is former Flyers head coach and former Philadelphia Phantoms captain and head coach John Stevens who is 31st all-time with 834 games.
– Lehigh Valley is 6-3-0 all-time in season openers. The Phantoms franchise is 19-8-0 in opening games dating back to the beginning of the Philadelphia Phantoms in 1996.
– Lehigh Valley is 5-3-0 in home openers and the Phantoms franchise is 18-7-1 in debuts at home.